Unsurprisingly, the library carries a number of titles that may help you on your quest for unlife.

For example, should one wish a romantic, if not ‘sanguine’ approach to becoming undead, try Luc Richard Ballion’s Vampire Seduction Handbook: a guide to the ultimate romantic adventure. Not only does this book ‘embrace’ the romance of blood-sucking, but offers helpful societal tidbits. Don’t take too much blood, don’t kill, don’t convert, and relish the fact your lover/victim doesn’t believe you’re a vamp. Also check out The New Vampire’s Handbook: a guide for the recently turned creature of the night, by Joe Garden and Miles Proctor. It is considered a comedy, despite its deathly serious topic, so it may bring a smirk to gothic boys and ‘ghouls’. 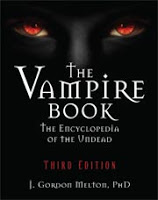 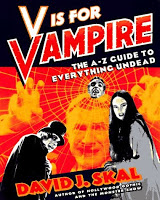 Perhaps you want to ‘sink your fangs’ into the academics of vampirism. Try V is for Vampire: the a-to-z guide to everything undead by David J. Skal, or the Vampire Book: the encyclopedia of the undead, by J. Gordon Melton. Both of these titles are full of well-referenced lore, and subjects one may not have considered aligned with the vamps; Charles Darwin, Psychoanalysis, and even Judy Garland. The film and literature guides are diverse and well organized. Sadly, or fortunately, both titles predate Stephanie Meyer’s Twilight series.

Maybe you don’t want to ‘leech’ off other’s research, but would prefer ‘gorging’ on real live undead experiences. Sundays with Vlad, by Paul Bibeau, describes a life-long fascination with vampires and their developing place in our culture. His passion is tongue-in-cheek. One might even call it ‘biting’. For a broader and less sardonic perspective, see Vampires in their Own Words: an anthology of vampire voices, edited by Michelle Belanger. This collection features the very real experiences of major figures in Western vampire culture. Discussions on behavioural codes, traditions and communities may help you decide what kind of vampire you’ll be.