I found myself in luck with a fresh bag of organically grown rhubarb, a love for rhubarb, but no real experience cooking/baking with it and open for suggestions.  Rhubarb pie was the first thing that came to mind, along with memories of my grandmother’s rhubarb pie from my childhood.  I decided to send out a Twitter Inquiry to whomever was listening as to any suggested favourite recipes involving rhubarb.  I received a response from @nataliejoan telling me that she had a “Sourcream rhubarb pie recipe” that she submitted in the Halifaxchicks cookbook that was sold for raising money for the Bust a Move for Breast Health back in January.  Oh YEAH, I thought! I contributed to that cookbook and bought a copy in support, so how perfect!!  I hadn’t really put the book to use as it had made its way down to my bookshelf in the basement, so it was the perfect excuse to get it out and make rhubarb pie (for breast health?).  It’s amazing what kinds of mind tricks you can play to justify making pie!  These pies were now in honour of breast health! 😀 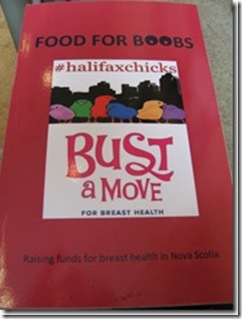 I was in the baking mood, but being mid-workweek I decided I wouldn’t venture into making my own pie crusts and cheated a little and bought some pre-made frozen shells.  The beauty of this recipe is that is has a special “streusel” like topping, so you can easily get TWO pies from your one package of pie shells *ahem, not that I needed two, but sure liked the sounds of that!*

The pie ended up being so freaking delicious, I just had to share it all with you.  I made a few modifications that worked phenomenally well that it also justified being shared here and cancels out any of the badness of the rest of it [/hormonal junk food jokes] 😀

Directions: Place rhubarb in pie crusts. (Note if using frozen rhubarb, it is best to add a tablespoon of instant tapioca above and below, to help absorb the liquid as the rhubarb thaws). 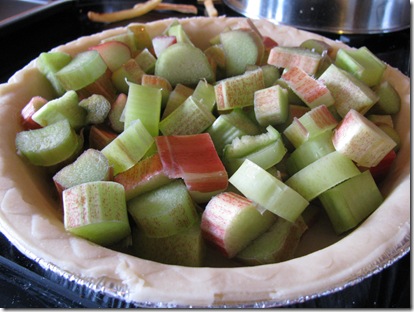 Mix sugar and flour in small bowl, then blend in greek yogurt. Pour over rhubarb 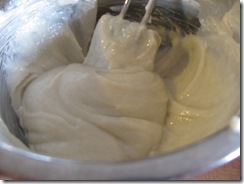 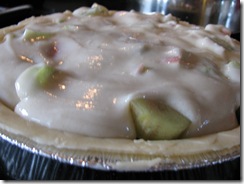 The Topping: Mix brown sugar and flour. Add softened butter and mix (get your fingers into it) until crumbly. Sprinkle over pie. 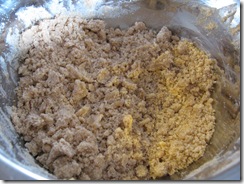 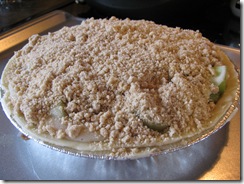 Bake at 425F for approximately 50 minutes. This recipe is designed for standard pie plate – if using. 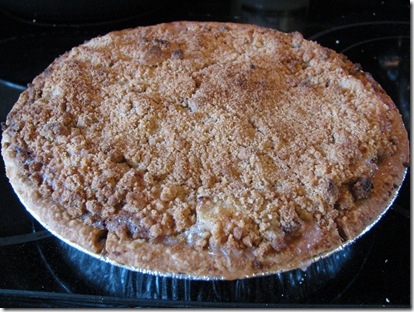 I have to boast about how incredible this pie was.  I absolutely LOVED it, even more so than a strawberry rhubarb which always won my heart before.  I added this recipe to my “favourite recipes” book to make next year when rhubarb comes in season again. It was slightly reminiscent of having a “cheesecake” filling texture – NOM! 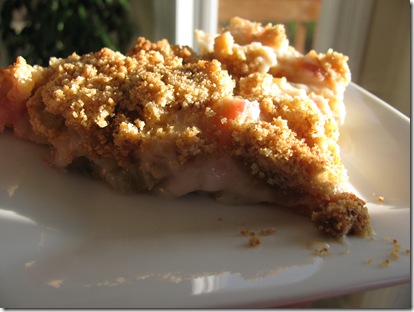 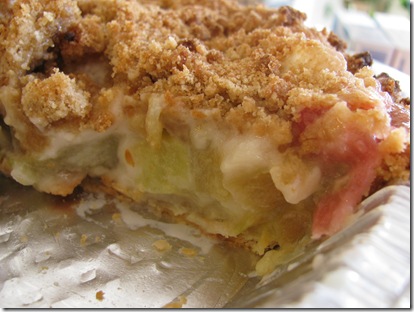 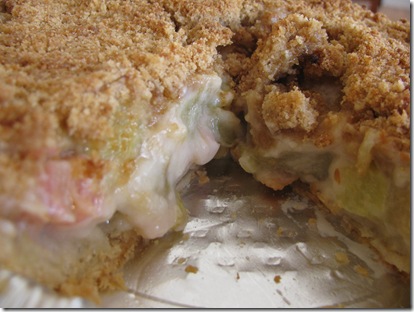 Try it and Enjoy!  Thanks @nataliejoan!