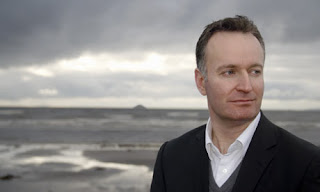 The Scotiabank Giller prize is in the news again, having just announced the 2011 shortlist. One interesting aspect of the Giller is the make up of the jury. It is only three people, changes completely each year and includes non-Canadians. This year’s jury is made up of Canadian writer Annabel Lyon, US author Howard Norman and Scottish novelist Andrew O’Hagan.
I am familiar with the work of Annabel Lyon (The Golden Mean) and Howard Norman (The Bird Artist) , but not so for Andrew O’Hagan. So who is he? Apparently an incredibly gifted writer, if the number of fiction awards and nominations he has received is any indication.
O’Hagan has won or been nominated for: the James Tait Black Memorial Prize; the Dublin IMPAC Literary award; the Booker Prize (twice); Whitbread First Novel; E.M. Forster award; and many more… Even more impressive considering that he has only released four novels.
The Life and Opinions of Maf the Dog, and of his friend Marilyn Monroe: a novel (2010)

In November 1960, Frank Sinatra gave Marilyn Monroe a dog. His name was Maf. He had an instinct for the twentieth century. For politics. For psychoanalysis. For literature. For interior decoration. This is his story. Maf (short for Mafia) the dog was with Marilyn Monroe for the last two years of her life. Not only a picaresque hero himself, Maf was also a scholar of the adventuring rogue in literature and art – witnessing the rise of America’s new liberalism, civil rights, the space race – and he was Marilyn’s constant companion.

Set in the the early 1960s, this joyful literary comedy, full of wit and pathos, features the celebrities and literati of the day, in New York and Hollywood. It is a fascinating fictional take on one of the most extraordinary periods of the twentieth century. The Life and Opinions of Maf the Dog, and of His Friend Marilyn Monroe transports us back to a moment when the worlds of politics, film, and art collided, and the decade that came to be known as “the Sixties” was born.
“O’Hagan’s incredible gift for dialog will give you the giggles and goose bumps. Monroe, Sinatra, Carson McCullers, Lionel Trilling, and Lillian Hellman will materialize at your bedside to entertain and outrage you with their outsizedness. Monroe fans should devour in one sitting this haunting cross between a summer read and a fall smolderer. Everyone else should read it, too, for its urgent lessons on empathy. Forever and always recommended.” – Library Journal
Be Near Me (2007)

Oxford-educated Father David Anderton, the Catholic priest in a small, working-class Scottish parish, triggers the enmity, suspicions, and simmering hatred of a town that resents strangers when he befriends two rebellious teenagers.
“Though that story has been told before, O’Hagan keeps both accused and accusers human and even noble. The most minor characters are drawn with truth and complexity, and O’Hagan’s prose is stylistically dazzling, as crafted and lovely as the best poetry.” – Library Journal
Personality (2003)

Loosely modeled on the tragic life of Scottish child star Lena Zavaroni, Personality, Andrew O’Hagan’s second novel, scrutinises the more insidious aspects of fame and the family. Told through an array of different voices–including a fictionalised Hughie Green–it centres on the story of Maria Tambini, a teenager from Rothesay, on the Isle of Bute, who becomes an international singing sensation before falling victim to anorexia and the unwelcome attentions of a fan.
“‘A beautiful, elegiac work, full of piercing insights into Scotland’s journey through the 20th Century… required reading for everyone.‘ Ian Rankin, Evening Standard
Our Fathers (1999)

A novel of three generations of Scottish dreamers follows the lives of Hugh Bawn, a socialist reformer, and his grandson, Jamie, who comes to see his grandfather as a mentor as he embarks on his own struggle for social justice in post-war Scotland.
“A relatively simple story, written with an entrancing, gentle eloquence: O—Hagan offers a deeply moving meditation on losses, both personal and historical, and on the tide of time through generations“- Kirkus Reviews