There are very few writers who transcend their genre and gain a new audience from readers who would not normally consider reading books from their genre. T.H. White (M) and J. R.R. Tolkien (M) were the only two fantasy writers I could think of that do that. I now add George R.R. Martin (M) to that list. Time magazine concurs and has listed Martin in their “2011 Time 100“, a list of the most influential people in the world. 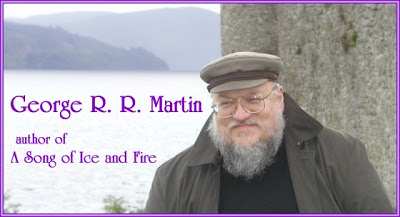 George R.R. Martin was born in Bayonne New Jersey in 1948. I have always had a prejudice that great fantasy writers are British; or at least European, but Martin has proven me wrong. Martin began to write at a very young age, selling stories to neighbour children for pennies. In high school he wrote fiction for comic fanzines. His first professional story published was sold to Galaxy magazine. Martin became a full time writer in 1979 and has written over 25 novels and numerous screenplays.

He moved to Hollywood during the 1980’s. There he worked on The Twilight Zone as well as Beauty and the Beast. Perhaps this is why his fantasy series “A Song of Ice and Fire” adapted so well to television in HBO’s Game of Thrones (the first title in the book series). It helps that Martin himself is deeply involved in the show as executive producer. The first season of the show has received 13 Emmy Award nominations, including winning Outstanding Drama and Outstanding Supporting Actor for Peter Dinklage
The wonderful series of novels that makes up A Song of Ice and Fire continues to grow. Originally planned as a trilogy it now consists of 5 published novels with another 2 books planned. There are also 3 prequel novellas, with more in the works. Martin, quoting J.R.R. Tolkien, stated that the series “grew in the telling.” The series has been translated into more than 20 languages and has sold more that 15 million copies worldwide.

So what is all the fuss about? A Song of Ice and Fire takes place in a fictional world, primarily on a continent called Westeros and on a land to the east called Essos. The main characters are human, but as the tale goes on there are creatures introduced, including fire-breathing dragons and the “Others” from the far-north. The story is told through a number of characters; twenty-five by the end of the 5th book. These characters have many sides to them and at times you can not be sure who is the villain or the hero, or perhaps a bit of both. There are three plot lines that become interwoven as the novels continues. There is a competition for the Iron Throne by the five Kings, There is the rising threat of the “Others” from the North and the rise of Daemery Targaryen, the exiled daughter of a king who was murdered in another civil war 15 years previous. She returns to claim her rightful throne.

While this description may make the series sound too confusing, it really isn’t. You will be swept up into this world and its characters. Having not read all the series yet, my favourite characters to root for are Daemery and King Hand’s daughter, Arya. I hope you too discover this wonderful series and gain your own favourite characters. But be warned though; no one is safe! Martin is know for killing off major characters. He has stated “when my characters are in danger, I want you to be afraid to turn the page….”
While waiting for the next books to be written in the Song of Ice and Fire series you may want to consider reading the following: