Listed below for your reading consideration are three new publications that re-examine pivotal moments in the US Civil Rights movement.
Elizabeth and Hazel : two women of Little Rock (M)
by David Margolick 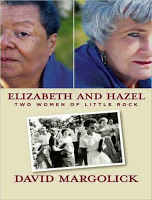 “*Starred Review* When Elizabeth Eckford braved the gauntlet of white hecklers leading to the newly desegregated Central High School in Little Rock, Arkansas, in 1957, photographers captured her image and that of the angry young white woman behind her. Elizabeth, the stoic, and Hazel Bryan, the tormentor, were frozen as icons. Elizabeth was part of the Little Rock Nine, the black teens who became the targets of race hatred as well as national and international inspirations. Despite public-relations efforts to depict the success of the Nine and the overall move to desegregation, the truth was far more complicated, particularly for Elizabeth.
Margolick draws on interviews and press reports of the time to present a very nuanced analysis of how Elizabeth and Hazel were affected by the scene that made them famous. Elizabeth spent the remainder of her life a near recluse, scarred by the memory of that day, adrift emotionally, dodging the commemorations. In contrast, Hazel opened up, evolving into a free-spirited progressive. Hazel, who didn’t even finish her year at Central High, later reentered Elizabeth’s life with a heartfelt apology that went unreported until the two women reunited for a symbolic reconciliation and photo op back at Central. A complex look at two women at the center of a historic moment.” – Booklist
The John Carlos Story : the sports moment that changed the world (M)
by John Carlos with Dave Zirin

“Nominated for an NAACP Image Award, Outstanding Literary Work Autobiography/Biography Seen around the world, John Carlos and Tommie Smith’s Black Power salute on the 1968 Olympic podium sparked controversy and career fallout. Yet their show of defiance remains one of the most iconic images of Olympic history and the Black Power movement. Here is the remarkable story of one of the men behind the salute, lifelong activist John Carlos. John Carlos is an African American former track and field athlete, professional football player, and a founding member of the Olympic Project for Human Rights. He won the bronze medal in the 200 meters race at the 1968 Olympics, where his Black Power salute on the podium with Tommie Smith caused much political controversy. The John Carlos Story is his first book.”- Publisher
Behind the Dream : the making of the speech that transformed a nation (M)
by Clarence B. Jones and Stuart Connelly.

“”I have a dream.” When those words were spoken on the steps of the Lincoln Memorial on August 28, 1963, the crowd stood, electrified, as Martin Luther King, Jr. brought the plight of African Americans to the public consciousness and firmly established himself as one of the greatest orators of all time. Behind the Dream is a thrilling, behind-the-scenes account of the weeks leading up to the great event, as told by Clarence Jones, co-writer of the speech and close confidant to King. Jones was there, on the road, collaborating with the great minds of the time, and hammering out the ideas and the speech that would shape the civil rights movement and inspire Americans for years to come.” -Publisher