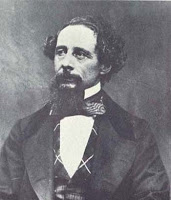 You don’t need an advanced degree in English Literature to know the name Charles Dickens (M). In the canon of great English novelists, his name is up there at the top. Many of us have encountered his timeless classics in high school—including A Tale of Two Cities, Great Expectations and more—but his influence can also be found in pop culture, modern literature and beyond.
In 2012, people around the world are coming together to celebrate Dickens’ 200th birthday—he was born on February 7, 1812. To mark the occasion at Halifax Public Libraries, the Spring Garden Road Branch is hosting St. Mary’s University English professor Stephen Cloutier for “What the Dickens?!” a talk looking at the life and influence of the great Victorian novelist. From Elizabeth Gaskell’s novel Cranford to the television series Doctor Who, Charles Dickens has been, at times controversially, a mainstay of popular culture. Join us on Dickens’ 200th birthday as we delve into his work and his ideas in an effort to understand why Dickens has become such an enduring literary icon.
Tuesday February 7th at 7pm
Spring Garden Road Memorial Public Library
5381 Spring Garden Road