The 2015 Christmas movie blockbuster season has begun with the release of Ron Howard’s In the Heart of the Sea, based on the non-fiction book In the Heart of the Sea: The Tragedy of the Whaleship Essex by Nathaniel Philbrick. The book tells the true story of the shipwreck that originally inspired Herman Melville to write Moby Dick.  In the early 1800s, whaling was the ultimate resource extraction industry, and Nantucket Island off the shores of Massachusetts was the unlikely center of the industry. Philbrick’s book draws us into the culture of early 19th century whaling; the years away from home navigating the globe in search of sperm whales, the military rigour of the life at sea, and the logistics of slaughtering and processing huge whale carcasses lashed to the side of a wave-tossed ship. When the Essex is destroyed by a whale, the crew attempt to navigate to South America several thousand miles away with rudimentary instruments and a scanty supply of food and water. Philbrick uses personal accounts of the shipwreck as well as contemporary studies of starvation and deprivation to delve into the desperate mindset of the survivors. It’s a gripping story of men driven to the very limit of survival.

Philbrick also references other famous tales of exploration, shipwreck, and survival in In the Heart of the Sea. The famous mutiny of Captain William Bligh’s ship The Bounty had occurred 30 years before the wreck of the Essex, and the story of his survival in an open boat on the Pacific would have been known to the survivors of the Essex. The Bounty : The True Story of the Mutiny on the Bounty by Caroline Alexander traces the steps of  the mutineers as well as the Captain Bligh. “Alexander’s reconstruction of the mutiny and its aftermath (thanks to her exhaustive research through books, reports, newspapers, correspondence, historical societies and archives) is almost as remarkable as Bligh’s feat. She details daily events during the captured mutineers’ court-martial, expanding on court transcripts. Separating facts from falsehoods and myths in the closing chapters, she finally turns to the life of the mutineers on Pitcairn Island, noting “this fantastic tale of escape to paradise at the far end of the world had the allure of something epic.” Publisher.

Captain Bligh’s Portable Nightmare by John Toohey attempts to present a sympathetic view of the notoriously cruel Captain and brings attention to the remarkable navigational skill that allowed Bligh to make the 4000 mile journey to saftey in an open boat. “Instead of rehashing the tale of the famed 1789 mutiny on the HMS Bounty (as done by so many historians, novelists and filmmakers), Australian historian Toohey tells the story of what happened to Capt. William Bligh after the mutiny was over. After his ejection from the Bounty, Bligh traveled halfway across the Pacific (to Java) on a cramped 23-foot launch with 18 crew members. Drawing heavily on survivors’ accounts and other contemporary sources, Toohey recounts the dramatic tale of this voyage in an almost novelistic narrative, reconstructing conversations and interior monologues and capturing the terror and cunning of men facing slow death on the high seas.” Publisher.

Readers that enjoyed these stories of survival against all odds might also enjoy reading about Ernest Shackleton’s failed expedition to the South Pole in the early 20th century. The setting for these adventures is in frozen Antarctica rather than the open Pacific, but the desperate will to survive by the crew is very similar. Endurance : Shackleton’s incredible voyage by Alfred Lansing has been called the “definitive account of the Endurance’s fateful trip”. Using team member diaries and interviews with survivors, Lansing describes the story of survival after their ship gets trapped and eventually crushed by the ice. 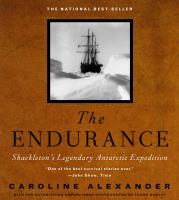 Caroline Alexander‘s book, The Endurance : Shackleton’s Legendary Antarctic Expedition also tells the tale of the Shackleton expedition, and includes 170 previously unpublished photos taken by the expedition’s photographer, Frank Hurley, described as “stark, artfully composed tributes to the savage beauty of the ice and to the fortitude of the men and their dogs. Not one of the men died during their sojourn in a freezing hell; as Alexander makes clear in her gripping, emotionally resonant book, this incredible fact bears witness not only to Shackleton’s leadership but to the strength of the human spirit.” Publisher.

Staff Pick: In the Heart of the Sea by Nathaniel Philbrick
https://haligonia.ca/staff-pick-in-the-heart-of-the-sea-by-nathaniel-philbrick-124478/