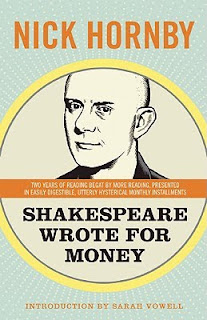 Nick Hornby and I have not read a lot of the same books.* Well, not if you count what he read between August 2006 and September 2008 anyway.

How do I know what Nick Hornby read during that time? Well, for that period (and actually for the several years preceding), Hornby produced a semi-regular column called “Stuff I’ve been reading” for the American magazine The Believer, in which he wrote about what he’d been reading (as well as watching on tv, doing with his family and myriad other topics), and in 2008, the columns that appeared from 2006-2008 were compiled into a single volume called Shakespeare Wrote For Money.

The essays are a wonderful glimpse into the life of a real reader – who picks up books at random, or based on a whim or because of something you see somewhere else. Each essay starts with a list of the books that Hornby both bought and read that month – they are usually very different lists, which is a nice comforting touch for all of us out there with piles of books (or extended holds lists at the library) that we can’t quite get through. 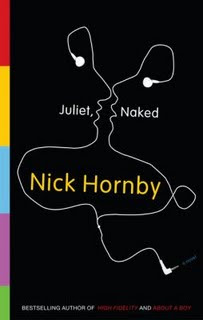 The essays are light, easy reads that take you into the world of reading and writing. Hornby dips into the current books of the time when he was

writing, but also backtracks to old favourites . Hornby is a great writer for this format, with a wonderful sense of humour and a healthy irreverence for standard book reviews. As such, the essays aren’t book reviews, so much as they are diary entries that talk a lot about books. They have a wonderful chatty style that leaves you with a sense that you’ve just talked books over coffee with a good friend.

If you’re familiar with Hornby’s fiction writing – from books like High Fidelity or A Long Way Down – and you also like to read about books, you’ll likely enjoy these essays (or the essays in his other two collections based on his Believer columns: Housekeeping vs. the Dirt and The Polysyllabic Spree). Incidentally, you may also be interested to know that Hornby has a new novel called Juliet Naked being released in late September).

*Oh, and the books that Nick Hornby and I have both read?