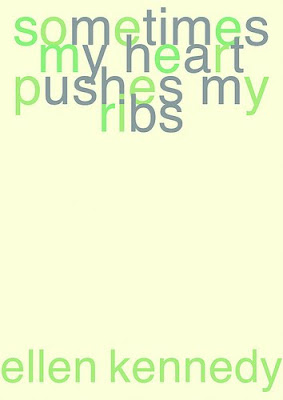 This slim little volume came in on hold for me at the library a couple of weeks ago. I looked at it’s simple cover and the glowing review quote on the back and I wondered – where did I hear of this book and why did I put it on hold? I still can’t answer the question, but I’m glad at some point that I did request this title — a combination of poetry and short prose pieces — which ended up being a quick and thoughtful read that was by times soothing, baffling and profound.
What I like about the writing in this book is that it is frank and unadorned. Like the title of the book itself – sometimes my heart pushes my ribs (the lack of capitalization is intended) – the pieces say things that are very profound in ways that are extremely understated.
A piece about buying fruit at the store and riding home on your bike with it takes something seemingly mundane and makes it something beautiful. There are several poems on different aspects of relationships, several that consider life and death and several that talk about going to the bathroom – all with the same matter-of-fact, simple style.
Three prose pieces – one which documents a romance between Woody Allen and Ned Vizzini, one that has an unnamed young girl visiting home after being away for college, and one in which Norm MacDonald walks around (one assumes) New York just doing random things – echo that same style. There is little to these stories except a straight presentation of what the characters did or said and yet they are very rich and vivid.
Back in April, I issued a poetry challenge to the other writers on this blog (and in hindsight – perhaps its during that poetry challenge that I discovered Ellen Kennedy’s book). What I really wanted to see with that challenge is how we could interest ourselves – and others – in a form that I think is read less and less is our society. It’s terribly difficult to describe a poet’s style, so I’ll finish with a poem from sometimes my heart pushes my ribs that illustrates Kennedy’s style, and says something about the state of poetry in our world today.
No One Cares About Poetry
You ask me if I have been doing any comics
I say “I am trying to focus on poetry right now”
You say “no one wants to read poetry”
I say “I know, I’m just doing it for the money”
My friend says “poetry is terrible”
Your girlfriend says “do you want a moon pie?”
I say “yeah, I’ll have a moon pie I guess.”