I don’t know what drew me to The Stranger (M) by Albert Camus as it might not be a perfect choice for the holiday season. I have always bypassed Camus as too difficult a read associated with mysterious and complicated ideas like existentialism and absurdism. What I found was compelling psychological fiction that is both moody and thought provoking.
Meursault, a French Algerian, is alerted by telegram that his mother has died. Somewhat against tradition his mother lived her final years in a retirement home rather than cared for by her son. Meursault attends his mother’s wake and funeral, but is strangely detached. He drinks coffee and smokes cigarettes while his mother’s elderly friends grieve for her. He returns home to fall into a romantic relationship with a co-worker. He tells her that he does not love her, but does not mind getting married. 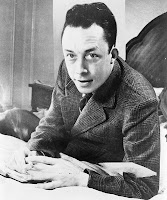 Meursault shows poor judgement in aiding his friend Raymond by writing a letter to an unfaithful girlfriend of Raymond’s, in order to lure her so that Raymond can beat her one last time. The girl’s brother confront the pair with a knife and, in the course of events, Meursault shoots the man, not once, but four times.

Meursault is strangely detached from life. He experiences life through physical sensations rather than through emotions. His only explanation for shooting the man four times was that he was overcome by the heat and the bright sunshine of the day. He has a stunning lack of empathy, as illustrated by his utter unconcern for the welfare of Raymond’s girlfriend. At his trial the prosecutor seems to base his case on Meursault’s lack of emotion at his mother’s funeral. The frustrated defense counsel puts forth that he appears to be on trial for a failure to grieve rather than murder.
The Stranger is a disturbing read that packs a wallop. Meursault only shows emotion when he rages at the prison chaplain. He appears to come to an understanding that the world is as indifferent to him as he is to it. He is anguished that the meaninglessness of his life has become apparent.

The Stranger made me think of Alias Grace (M) by Margaret Atwood, both for its disturbing tone and its complex psychological portrait of a murderer. “Grace Marks has been convicted for her involvement in the vicious murders of her employer, the wealthy Thomas Kinnear, and of Nancy Montgomery, his housekeeper and mistress. Some believe Grace is innocent; others think her evil or insane. Now serving a life sentence after a stint in Toronto’s lunatic asylum, Grace herself claims to have no memory of the murders. Dr. Simon Jordan, an up-and-coming expert in the burgeoning field of mental illness, is engaged by a group of reformers and spiritualists who seek a pardon for Grace. He listens to her story, from her family’s difficult passage out of Ireland into Canada, to her time as a maid in Thomas Kinnear’s household. As he brings Grace closer and closer to the day she cannot remember, he hears of the turbulent relationship between Kinnear and Nancy Montgomery, and of the alarming behavior of Grace’s fellow servant, James McDermott. Jordan is drawn to Grace, but he is also baffled by her. What will he find in attempting to unlock her memories? Is Grace a female fiend, a bloodthirsty femme fatale? Or is she a victim of circumstances?” publisher