In Crome Yellow by Aldous Huxley very little happens really. Student/poet Denis Stone spends the weekend in an English Country home in the village of Crome. There, in addition to Crome’s eccentric owners, we meet many unusual guests. One of whom, a girl four years his senior, captures Denis’ heart. Unhappily for Denis, she considers him to be immature and does not return his affections. There is a lot of talking. A LOT of talking. Opinions are exchanged, philosophies of life shared, yet Denis leaves Crome with seemingly little wisdom gained.

Although not a great deal happens, Crome Yellow challenged attitudes commonly held at the end of the Victorian and Edwardian eras. For example, two of the women, Mary and Anne, discuss taking charge of their own sexuality. I suppose the question is – does the book stand the test of time. On the positive side, there were times I laughed out loud. Other times I had the feeling that there was more to this short novel than I was fully understanding.

Denis’ situation is universal and timeless. He is an uncertain young man searching for love and for his own identity. He has a moment of intense self-awareness when he finds Jenny’s sketchbook. Jenny is a deaf woman who is frequently ignored and underestimated. He finds her satirical sketches of the company and realizes that her powers of observation are equal to his.

For me, the highlight of the book was the family history written by Henry Wimbush, host of Crome. One of his ancestors was quite diminutive (under three feet) and created a world which was sized just for him. Over the years he rebuilt his home, hired small servants and eventually found a small wife. No small feat. She had to be small, beautiful and of quality. He loved to hunt and would send his pack of hounds (pugs) to chase rabbits. Oh the snorting and wheezing that would accompany that chase! 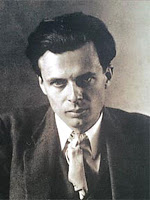 Huxley, of course, is much better known for his Brave New World. In Crome Yellow (his first novel) we get a hint of some of these ideas. Scogan, the philosopher prophesies a future in which the family disappears and society is maintained by vast state incubators.

For examples of modern social commentary fiction try Shades of Grey by Jasper Fforde, The Book of Stanley by Todd Babiak and Boomsday by Christopher Buckley