First wildly popular, then dismissed as saccharine, The Carpenters have come to be appreciated by a new generation of music fans for their contribution to American pop music. Karen Carpenter was the lead singer and recognizable face of the group. Randy L. Schmidt, in Little Girl Blue: the life of Karen Carpenter rescues her from being merely the public face of anorexia nervosa.

Karen and Richard Carpenter were children of a working class family in the 1950’s. Richard was identified as a musical prodigy early on and the family moved, worked and sacrificed to further his career. Karen’s talents were identified later and, within the family, were not necessarily considered to be equal to Richard’s. The Carpenters developed and perfected their sound. They were both perfectionists and were most comfortable in the studio and reproducing that studio quality in their performances. Over time they learned to perform before an audience. Karen, though known ultimately for her fine voice, was also a talented drummer. She was most comfortable singing from behind her drum kit, but eventually had to leave that behind. 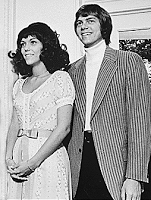 Karen’s life and legacy has been clouded by opinion and controversy. Schmidt, in addition to extensive research, interviewed many of Karen’s close friends. Richard declined to be interviewed as he has said all he wishes to say about his sister’s life. Her husband Tom Burris may not speak about the Carpenters for legal reasons. Her mother Agnes died in 1996. With a reasonable degree of objectivity, Schmidt falls squarely in Karen’s corner. Behind that unique voice and behind the woman who Playboy magazine readers voted to be the best rock drummer of 1975, was an obsessive perfectionist.

She was a sweet girl, who never had the opportunity to grow up. With hindsight we see how she lacked control in her life. Despite her wealth, she was unable to move from her parents’ home until well into her twenties. Professionally, someone else always called the shots. When she discovered her fiancee’s disastrous lies, her mother told her she had made her bed and the wedding would go on. She could control her weight, however. The world watched, appalled, as she wasted away before their eyes. By the time she had entered treatment it was too late and she passed away much too soon at 32.

Portia de Rossi has written a book recently about her struggle with an eating disorder. In Unbearable Lightness: a story of loss and gain – “Portia de Rossi weighed only 82 pounds when she collapsed on the set of the Hollywood film in which she was playing her first leading role. This should have been the culmination of all her years of hard work—first as a child model in Australia, then as a cast member of one of the hottest shows on American television. On the outside she was thin and blond, glamorous and successful. On the inside, she was literally dying. In this searing, unflinchingly honest book, Portia de Rossi captures the complex emotional truth of what it is like when food, weight, and body image take priority over every other human impulse or action. 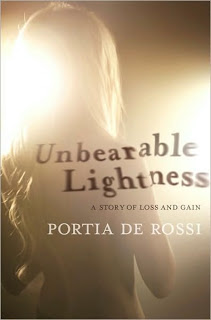 She recounts the elaborate rituals around eating that came to dominate hours of every day, from keeping her daily calorie intake below 300 to eating precisely measured amounts of food out of specific bowls and only with certain utensils. When this wasn’t enough, she resorted to purging and compulsive physical exercise, driving her body and spirit to the breaking point.

Even as she rose to fame as a cast member of the hit television shows Ally McBeal and Arrested Development, Portia alternately starved herself and binged, all the while terrified that the truth of her sexuality would be exposed in the tabloids. She reveals the heartache and fear that accompany a life lived in the closet, a sense of isolation that was only magnified by her unrelenting desire to be ever thinner. With the storytelling skills of a great novelist and the eye for detail of a poet, Portia makes transparent as never before the behaviors and emotions of someone living with an eating disorder.” – publisher