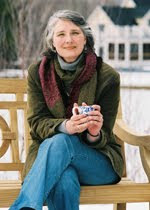 Working at a busy branch of the library, I talk to a lot of people about books – especially about the books they love. One author whose name has been coming up more and more lately is Louise Penny.

Penny is a Canadian mystery author who has five books out in a continuing series. The series features the detective work of Chief Inspector Armande Gamache of the Sûreté du Québec. Set in a small Eastern townships community called Three Pines, the books have developed a loyal following amongst readers who enjoy a good mystery peopled with well developed characters. Kirkus Reviews said of the series “Gamache is a prodigiously complicated and engaging hero, destined to become one of the classic detectives.” Penny is popular amongst readers who enjoy traditional British mysteries – think Agatha Christie and P.D. James, but her books have a distinctly Canadian feel.

Here’s a quick rundown of the titles in the series from the library catalogue’s summaries:

1. Still Life – The discovery of a dead body in the woods on Thanksgiving Weekend brings Chief Inspector Armand Gamache and his colleagues from the Surete du Quebec to a small village in the Eastern Townships. Gamache cannot understand why anyone would want to deliberately kill well-loved artist Jane Neal, especially any of the residents of Three Pines – a place so free from crime it doesn’t even have its own police force.

2. Dead Cold– The falling snow brings a hush to Three Pines — until a scream pierces the air. A spectator at the annual Boxing Day curling match has been fatally electrocuted. Heading the investigation, Chief Inspector Armand Gamache unravels the dead woman’s past and discovers a history of secrets and enemies. But Gamache has enemies of his own.

3. The Cruelest Month – A seance held on Easter Sunday has tragically gone wrong and someone has been literally scared to death. As Gamache starts to unearth the secrets of those close to the deceased, he faces his own demons.

4. The Murder Stone – A brilliant, big, old-fashioned drawing-room mystery with a denouement worthy of Agatha Christie. Wealthy, cultured and respectable, the Finney family is the epitome of gentility. When Irene Finney and her four grown-up children arrive at the Manoir Bellechasse in the heat of summer, the hotel’s staff spring into action. For the children have come to this idyllic lakeside retreat for a special occasion a memorial has been organised to pay tribute to their late father. But as the heat wave gathers strength, it is not just the statue of an old man that is unveiled. Old secrets and bitter rivalries begin to surface, and the morning after the ceremony, a body is found.

5. The Brutal Telling – “Chaos is coming, old son.” With those words the peace of Three Pines is shattered. As families prepare to head back to the city and children say goodbye to summer, a stranger is found murdered in the village bistro and antiques store. Once again, Chief Inspector Gamache and his team are called in to strip back layers of lies, exposing both treasures and rancid secrets buried in the wilderness.

It’s not just library users that are talking about Penny, she has already gotten lots of praise and numerous award nominations for the Gamache books, and news this week is that she has been nominated for prestigious Agatha Award for the 5th and latest book in the series.