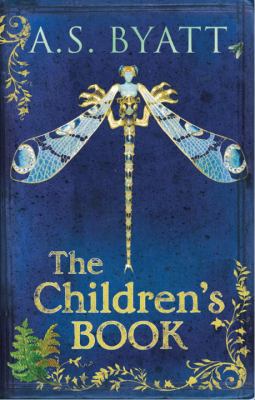 The Children’s Book is A.S. Byatt’s latest ambitious literary novel. The story is set between 1895 and 1919 during a time of great change and upheaval in England. The story involves three interconnected families, the Wellwoods, the Cains and the Fludds. It begins with a very satisfying rags to (upper middle class) riches orphan story. Philip Warren escapes his life of poverty and hides in the basement of the Victoria and Albert museum with hopes of preparing himself to work as a potter. He is absorbed into the numerous Wellwood family and then onto the home of Benedict Fludd, a brilliant and perhaps mad potter. It is set in a time of great change in England. “Sempiternal” Queen Victoria has died and the Edwardian Age has begun. The families involved are somewhat eccentric and bohemian. Marital bonds are loose and family relationships are blurry. For the first time we see electricity and telephones. At the centre of the story is Olive Wellwood, an author who writes a book for each of her seven children. Edith Nesbitt,Kenneth Grahame and J.M. Barrie come to mind.

The Children’s Book is a long dense read, that is meant to be read slowly. No skimming here. Every word is important. Byatt’s style is lyrical and elegant; a slow leisurely read. It is obviously well researched and displays a depth of knowledge about this period of time in England’s history and the intellectuals who helped to shape thought. Fabianism and women’s suffrage are important themes, but we also see the darker side. The suffrage movement degenerates into anarchy. Women are imprisoned and suffer the indignities of forced feeding. A bohemian marriage could be a liberating relationship, but it could also have a devastating effect upon the children as they are forced to question their very identity. And then there was the war. The reader has watched the boys grow up over twenty years and are not spared the atrocities.
This was fascinating time in England’s history which has been well documented in fiction and in fact. The Perfect Summer: Dancing Into Shadow: England in 1911 by Juliet Nicolson deals with one pivotal summer through the eyes of a number of individuals of varying classes, genders and occupations. The social, political and economic issues are also key themes of Tracy Chevalier’s Falling Angels. An unlikely friendship is struck between two young girls following Queen Victoria’s death. Another very long and dense read is Augustus John: The New Biography by Michael Holroyd. This British artist embraced a truly bohemian life, again with some mixed results on family life.
Novelist has a terrific Author Read-Alike article about A.S. Byatt. They suggest Iain Pears, Robertson Davies, John Hersey, Steven Millhauser and Ursula K. Le Guin as possible similar authors. Take a look at the article to see what drew them to these conclusions.