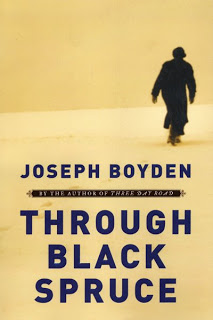 In Through Black Spruce by Joseph Boyden, the Bird family is having a particularly bad couple of years. Will Bird lies in hospital in a coma reflecting on the events that lead up to his present state. His niece, Annie, visits him in hospital and fills him in on recent events in her life. The novel is constructed on a series of flashbacks. Will and Annie Bird are Cree living in northern Ontario. Annie’s sister, the beautiful Suzanne, left to become a model and has disappeared. Her family fears that she has gotten caught up in the drug activities of the Netmakers, the resident bad boys.

Annie is competent and fearless and, like her sister, beautiful. She leaves the north and journeys to Toronto, Montreal and New York to find her missing sister. Along the way she meets up with Gordon who becomes her silent protector when her strength fails her. Meanwhile Will is engaged in a violent struggle of his own with the Netmaker clan.

This book is all about contrasts. The North is harsh and survival is elemental, but it is safe and it is home. The South is easy and existence and pleasure are givens, however it is foreign and it is dangerous. 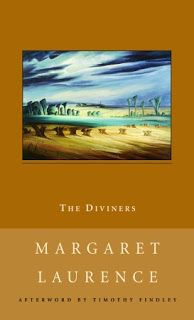 A thoroughly enjoyable read. The action is fast-paced and my attention was held by the revelation of the many secrets. The relationships were satisfyingly complex, but I was a little disappointed by the ending which seemed to tie things up a little too neatly.

Some other books came to mind while I was reading this one. I pictured Jules Tonnerre of Margaret Laurence’s The Diviners. He was distressed that Morag allowed their daughter Pique to leave home. “You know where she can end up, don’t you? You know what can happen to her, don’t you?”

Kiss of the Fur Queen by Tomson Highway has Champion and Ooneemeetoo Okismasis taken from their parents and placed in a Catholic residential school. This theme is also addressed in Through Black Spruce, as Will Bird laments the fact that his father was too old and too tired to save him from the residential school. 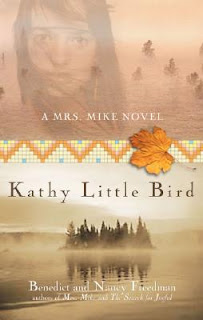 In Kathy Little Bird by Benedict and Nancy Freedman draws on her traditional Cree ways to find to draw solace for her weary soul once she becomes a famous country and western singer.

Orphan Love by Nadia Bozak has several parallels with Through Black Spruce. The characters travel between northern Ontario and New York City, this time, rather than the world of high fashion, the world of heavy metal and punk rock culture.

See here for an interview with Boyden on The Hour, discussing his recent Giller prize award – the first writer with an Aboriginal background to win.