This is a thoroughly delightful book. 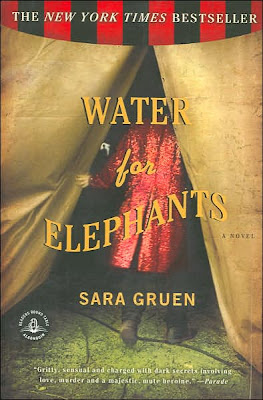 In Water for Elephants by Sara Gruen, young Jacob Jankowski, a veterinary student, has his studies interrupted by his parents’ sudden death. Finding himself unable to complete his final exams and unable to financially manage his parents home, he, like so many during the Depression era, hit the road. His adventures began when he stumbled upon a travelling circus. He becomes the circus’ veterinarian, falling in love with Marlena the star performer and Rosie the rogue elephant who only understands Polish. He has to contend with Marlena’s violent husband, a paranoid schizophrenic and Uncle Al, the abusive and corrupt owner.
Although the story is set in a desperate time and a dangerous setting, some characters are able to transcend the chaos and form lasting relationships. The action is fast paced, the details are carefully researched and you will have a hard time putting this one down.
The story is framed by 90 (or so) year old Jacob Jankowski in his present day nursing home reflecting on his glory days. His family is attentive, visiting him on a schedule, but he feels that they don’t seem to regard him as a person anymore. They don’t know what to do with him.
This aspect of the story brings to mind The Stone Angel by Margaret Laurence. Jacob is a kinder, gentler version of Hagar. Hagar, like Jacob, reflects back on her long life. She is frustrated by old age and its indignities. She, like Jacob, plots her escape and meets up with a kindly stranger.The novel is populated with both hard working/living circus folks and an assortment of eccentrics.
Another classic of Canadian literature that comes to mind is World of Wonders by Robertson Davies, part of the Deptford Trilogy. Again, Water for Elephants is a gentler version. World of Wonders can be dark, but certainly gripping. Paul Dempster (later Magnes Eisengrim) runs away from home and is taken in by a troupe of travelling performers where he learns his conjuring skills.
Finally, if you find the circus and all its workings are fascinating, you might like to try The Circus in Winter by Cathy Day. This is a collection of short stories concerning The Great Porter Circus ranging from 1884-1939. The intimate world of the circus and its inhabitants is described revealing their private lives, loves and secrets.