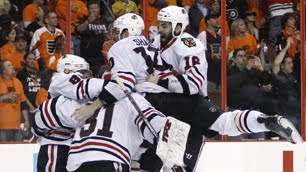 The Youthful Blackhawks celebrate what could be first of several Stanley Cup championships.

by Henry Whitfield
A month of competition, thousands of minutes of hockey played and countless highlight reel plays the Stanley Cup was decided in one of the most anti-climatic moments in recent sport history.

Patrick Kane danced along the side boards, drove to the net and put a bad angled shot through Michael Leighton.

The puck lodged itself into the side of the net and the celebration was delayed by the confusion. It was an awkward moment as the Chicago coaching staff didn’t celebrate but their team swarmed the goal scorer as he skated full length celebrating his goal.
Moments later it was confirmed: The Chicago Blackhawks were the 2010 Stanley Cup Champions.

With that goal the dream came to fruition for the Chicago Blackhawks, who had gone 49 years without a championship, and in that same moment the come-back kid Philadelphia Flyers were dealt a final, crushing blow in what had almost been a Cinderella-like playoffs.

When Scotty Hartnell scored to take the game to overtime with under five-minutes left, I high-fived my friends and cried out “Flyers in Seven,” maybe it was my premature excitement that cost the boys the cup but it meant that I had failed to get a series correct since the second round.
Jonathan Toews was deservedly awarded to the Conn Smyth trophy, an award that almost certainly would have gone to Chris Pronger if his team had pulled off another come from behind victory, and the famously serious captain finally cracked a smile.

Here are some final thoughts on the Stanley Cup Finals and the 2010 Playoffs:

•Love him or hate him, Chris Pronger made the 2010 playoff’s more fun than usual; Whether it was his antics in stealing the game puck after Chicago victory in game 2, or his quick quips to the media throughout, he gave the fans something that we haven’t seen since Jeremy Roenick was in the playoffs.
•With 28 Canadians playing in the Stanley Cup final last night and another 11 that were not dressed, it is safe to say that Canada is on top of the Hockey world. As I pointed out after round one, it just doesn’t seem that European players in the NHL have that desire or passion to go after the Cup like their North American counterparts.
•This year marks another season that the Stanley Cup has gone south of the border and it has now been too many years since a Canadian team has lifted hockey’s holy grail. The Montreal Canadiens almost ended the drought but only time will tell when the Stanley Cup will come home next. Leafs in 2011 anyone? You heard it here first!
•Get ready for some outrageous contract signings in this offseason. Players like Jaroslav Halak, Dustin Byfuglien and had outstanding playoff performances and will look to cash in on their new found stardom.
•This year’s Stanley Cup finals may have been short on goaltending excellence but made up for it with some of the best offensive battles in recent memory. Not being a goalie, I don’t mind seeing games finish with goals galore and this year’ finals should help grow the game down south, with some of the most exciting hockey in years.
•Last but not least, Jonathan Toews showed a lot of class last night as he passed the Cup straight to Marian Hossa after lifting the cup himself. Hossa was trying for his third straight year to win the Stanley Cup and it was a touching moment as all the gathered Blackhawk players chanted his name.

Breakout Player – Although the Canadiens didn’t hoist the cup, it was definitely a coming out party for Jaroslav Halak. He posted a neat 2.55 GAA and led all goalies with a .923 save percentage.

Biggest Disappointment – Although Ilya Kovulchuk was an utter failure for New Jersey and helped them flop, the biggest disappointment in the playoffs goes to Washington Capital’s forward Alex Ovechkin. The talismanic forward failed to drive his team forward and elimination in the first round is unacceptable.

Top Defencemen – Chris Pronger was a beast throughout the playoffs and often played more than half of most games in the 2010 playoffs. The Canadian battled not only the ice but with the media storm around his team, and once again he threw an underachieving team on his back and carried them deep into the playoffs.

Top Forward – Hard to argue against the numbers Jonathan Toews put up throughout the playoffs but I am going to and put it out there that Daniel Briere was the top forward in this year’s playoffs. The small forward had 12 goals and 18 assists to give him the playoff point lead at 30 points. We finally saw his talent come to the forefront and he was a catalyst for the Flyers. He also added a +9 plus/minus throughout the playoffs.

Top Goalie – Sure he let a terrible goal in to allow the Chicago Blackhawks to hoist the cup but Michael Leighton was by far the best goalie in the playoffs. Registering 3 shutouts in the last series allowed the Flyers to get as close as they did this year and the kid finished with a GAA 2.46 of and a .916 save percentage.

With the playoffs completed, I feel compelled to share my wonderful prediction record. After going 6/8 in the first round, I fell to bits and failed to keep up the pace. I finished with an 8/15 record, good enough for a 53% record but nothing to phone home about.

Now the playoffs are finished and the rest of the teams have joined Toronto on the Golf Course only one question remains: Taylor or Tyler

Henry Whitfield is an avid sports fan who covers everything and anything in the sports world, while focusing on hockey and football. Follow him on twitter @HenryWhitfield