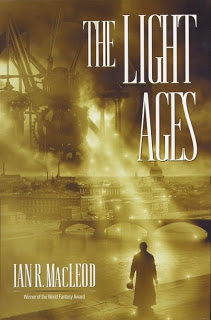 What the heck is Steampunk?
The first time I encountered the term I had no idea what it meant, but I had to find out. It sounded very exotic and hip.

Steampunk is sub genre of fantasy, a sort of spin off of cyberpunk.  Read On… Fantasy Fiction: reading lists for every taste, defines steampunk as :”Set in the Victorian era in early industrial times, steampunk places magic alongside the dawn of technology. Anti-authority, anti-class-structure punk attitude is also on display.”

Not exactly what I had expected, but intriguing none the less.
Some suggested examples of steampunk are:
The Glass Books of the Dream Eaters, by Gordon Dahlquist
The Light Ages, by Ian R. Macleod
The List of Seven, by Mark Frost
The League of Extraordinary Gentlemen, by Alan Moore