Now in it’s 41st year, the Grand Prix is awarded each year to recognize an author for their overall output and their contribution to the development of the comic strip. 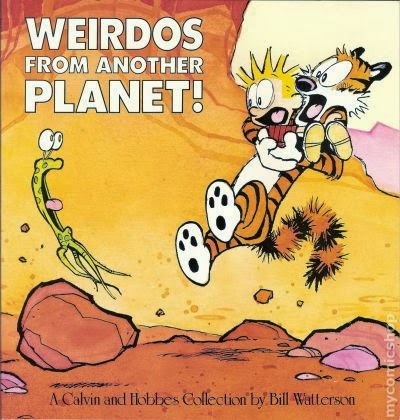 Watterson is the author of the famous comic strip Calvin and Hobbes (M), a long running series that still strongly appeals to all ages. Our libraries are constantly replacing worn out copies in both our adult and children’s collections.

Looking for Calvin and Hobbes : the unconventional story of Bill Watterson and his revolutionary comic strip (M) by Nevin Martell

“For ten years, Calvin and Hobbes was one the world’s most beloved comic strips. And then, on the last day of 1995, the strip ended. Its mercurial and reclusive creator, Bill Watterson, not only finished the strip but withdrew entirely from public life. In Looking for Calvin and Hobbes, Nevin Martell sets out on a very personal odyssey to understand the life and career of the intensely private man behind Calvin and Hobbes. Martell talks to a wide range of artists and writers (including Dave Barry, Harvey Pekar, and Brad Bird) as well as some of Watterson’s closest friends and professional colleagues, and along the way reflects upon the nature of his own fandom and on the extraordinary legacy that Watterson left behind. This is as close as we’re ever likely to get to one of America’s most ingenious and intriguing figures – and it’s the fascinating story of an intrepid author’s search for him, too.” – publisher