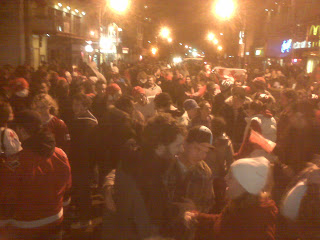 Could you have written a better ending?

After 17 days of fantastic competition, the most anticipated event of the Vancouver Olympics ended in a overtime goal by Cole Harbour’s own, Sidney Crosby.

And the men’s hockey gold medal, lifted Canada to the sole owner of the Winter Olympic record for most golds. 14.

It prompted a spontaneous celebration coast-to-coast. Spring Garden Road, the busiest street in downtown Halifax was closed down after people ran into the streets in celebration.

The cops were there, but they were handing out high-fives and enjoying the atmosphere.  Nobody got out of hand, everyone loved everyone. What a night.

The ratings were released Monday afternoon and there was an average audience of 16.6 million viewers, while 26.5 million tuned into at least some of the game — Yes, that is 80 per cent of the country.