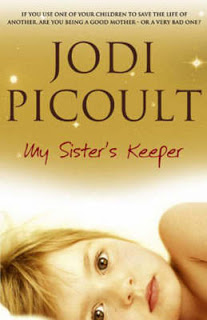 Back in May, Lynn posted about some recent films that were based on movies. With summer upon us, there are a whole new batch that seem worth highlighting. Check out the book first – the movie will appear soon in a theater near you!

My Sister’s Keeper: based on the novel of the same name by Jodi Picoult. By the time you read this, the film based on this book about a young girl whose parents conceived her in order to provide her leukemia suffering older sister with a bone marrow match will be in theaters.

Cheri by Collette: I love it when a new film breathes life into an old book. From the books Cheri and the Last of Cheri by Collette, Michelle Pfeiffer stars in this period piece of romance in Paris in the 1920s. A limited release is scheduled in the US beginning June 26th: revisit the novels if you don’t get a chance to see this one this summer.

I Love You Beth Cooper: The class valedictorian makes a life changing decision when he professes his love for the head cheerleader in lieu of a graduation address. The hilarious first novel by Larry Doyle was only released in 2007. I don’t know why I can’t get enough of these high school fish-out-of-water stories.

Harry Potter and the Half Blood Prince: The films of the megabestselling J.K. Rowling series are creeping every closer to conclusion. July sees this release: might be time to re-read book 6 to get ready.

Julie and Julia: First it was a blog, then a book and now Julie Powell’s story of trying to cook everything from Julia Child’s Mastering the Art of French Cooking over the course of a year is coming to the big screen. The film stars Amy Adams and Meryl Streep (who looks awesome in her Julia Child hairdo btw).

Taking Woodstock: Having the film adaptation of your book directed by Ang Lee has got to help sales. Elliot Tiber’s memoir of the Woodstock concert was published as Taking Woodstock: a true story of a riot, a concert and a life by the smallish publishing house Square One back in 2006. There was a reprint issued this past May in anticipation of the film’s release in August.

Time Traveler’s Wife: Audrey Niffenegger’s first novel of a time-traveling librarian and the woman he falls in love with was a surprise hit back in 2003. It’s reached cult status and the film version will be in theatres this August.

Summer movies based on books
https://haligonia.ca/summer-movies-based-on-books-3802/