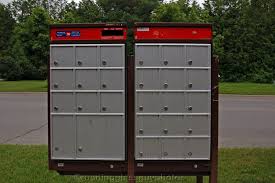 Like it or not, home mail delivery service is going the way of the dodo. Community mailboxes are coming soon to your neighbourhood (You can find out when, here).

While we may not have any say in this decision, it doesn’t seem unreasonable that we, the citizens, should have some say in the placement of these boxes.

The following is a letter from Terrence Rowell, a founding member of the Oathill lake Conservation Society. He raises what I think is a very valid concern about placing super boxes on park land.

What do you think?

I just observed a team of three people taking street and green space (lake side) measurements on Lorne Ave. at the north end of the lake. Knowing someone would be asking me about it, I walked down and asked what they were surveying for. They were scouting out places to put community mailboxes. They are proposing to put a 32 home set of boxes (two units) in the space between the two paths that lead down to the dam area and another 16 home set (one unit) somewhere near the south end of the lake. In the case of the two unit location, I pointed out that this was a parkland green space and the boxes would destroy a beautiful view of the lake. I asked why it could not go where the current mailbox is but they had no answer. In the case of the one at the south end of Lorne, I asked why they would not place it on the cul-de-sac where there is no lake access or road-level view of the lake. It’s also an area with an easy turn-around for anyone driving to the boxes. Again, no real answer was given.

I know Canada Post is going to lumber us with these boxes one way or the other, and they have to go somewhere, but it sounds as if the city has some say in their placement. I also know that no matter where they are placed, some people will not be pleased. Nevertheless, I think every effort should be made to avoid destroying the parkland and ruining any of the viewing points around this beautiful lake.