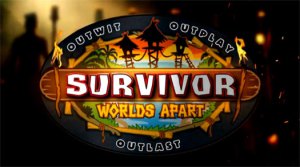 First things first: the Survivor pool. I did not fare well this time, kids. Seventeen names in a hat and I was drawn LAST. Last! I ended up with Dan.

Dan. The guy who lost his teeny-tiny underpants in the ocean and had to fashion a replacement out of his only shirt. (He can’t wear his jeans, because no one wants to go commando in wet jeans.)

Welp. It’s unlikely that I’ll be winning this one. But, hey – you never know! Jenn and Joe were some of the first picks, and they were both on the chopping block this week. (More pool updates, for anyone interested: my mom has Sierra, my husband has Hali and my sister has Tyler.)

I could show you incredible things…

While Dan was going to great lengths to keep at least somewhat covered up around camp, over at the White Collar tribe people were shedding their undergarments left and right. Max kicked things off, strolling around in the buff as an homage to Richard Hatch. Shirin followed suit, strangely decided to keep her bra on but to remove her bottoms. I can’t say I understood the logic there. Tyler looked so uncomfortable. I don’t think her heard a single word of that conversation about washing pots.

At the Blue Collar tribe, Mike was making everyone so agitated that I began to think Dan might just have a shot in this game. Dan is older, overweight, and has an annoying personality. It seemed like a sure thing that he’d be the first boot for the Blue Collars. But not if Mike has anything to say about it!

Mike is military. Mike is a task master. Mike wants to retrieve firewood until the cows come home. Mike does not want to hang around playing makeshift basketball. The guy seems like a real killjoy. The impression I’ve gotten from interviews with former Survivor players is that there’s a lot of downtime. Time when you aren’t strategizing or surviving, you’re just hanging out and, like, playing blackjack with some banana leaves you painted numbers on. Is the Blue Collar tribe really that lazy, or does Mike just want to work 24/7? He is making enemies fast.

I get drunk on jealousy…

Over at the No Collar tribe, things were falling apart fast. Vince is so intensely jealous of Joe, it’s embarrassing. What was with the way he confronted him? “I just need you to acknowledge that you steamroll projects.” Ummm, no thanks? Joe was as nice as possible and handled the situation pretty well – he even told Hali and Jenn that Vince is probably smarter and more intuitive than they think. But the tribe has definitely split down age lines – above and below 30.

Nina is finding it hard to fit in, because of her disability. I felt for her – it cannot be easy to be hard of hearing on Survivor. So many conversations are whispered and discreet, or happen at night or while hauling firewood. When Jenn and Hali went skinny-dipping without inviting her, it was like a breaking point. She felt so miserable and left out, and just lost it.

I can be mean when I’m only talking to the TV/my husband. But it’s the truth – the hot twenty-somethings did not think the 50+ year old mom would want to come skinny dipping.

There was a right way for Nina to handle that situation, and she went the opposite direction. She was emotional and hurt, and confronted them with a mix of anger, sarcasm and martyrdom that just was not going to work. Jenn got all defensive, and escalated the situation. Let’s just be honest – Jenn seems mean.

I can make all the tables turn…

Challenge time! And LOL Mike, it involves basketball! The tribes had to maneuver buoys through a water obstacle course, and then shoot baskets. Dan told Probst that he’d surprise him, and he did. He surprised me! He made it through the course faster than Vince and Tyler.

The challenge had so many ups and downs. At one point the No Collars were quite ahead, but Will ultimately lost a huge lead for the No Collars. But the fact that NO ONE on that tribe could sink a basket was what really led to their loss. Joaquin led the White Collars to first place, and Sierra nabbed second place for the Blue Collars. Suck it, Mike! No more whining about leisure activities back at camp.

Back at the No Collar camp, there was a flurry of activity. Joe, Hali and Jenn are obviously a strong trio. Will and Nina are friends. Vince is… also there. Vince wanted to vote out Joe, saying “this is our one chance to get Joe out.” Um, no it’s not, dude. This is your first Tribal Council. Now is not the time. Other opportunities will come up.

Jenn wanted to vote for Vince, saying she finds him untrustworthy. Sure. But I think what she really meant was “creepy and annoying”.

Although there was some discussion around Will’s exhaustion and Nina’s age, I was surprised that their names didn’t come up more. Will sucked in this week’s challenge, and Nina sucked in last week’s. They are the two weak links on the tribe, but everyone’s already jumping to who they don’t trust or who the big threats are. Don’t come out so strong right out of the gate, guys!

Joe, Hali, Jenn and Will discussed splitting the vote between Vince and Nina, in case there was an Idol in play. I thought that was a very stupid idea, since they were not sure they had Will in their corner. And they didn’t – Will was playing both sides, and told Nina about the plan. Nina, Vince and Will talked about voting out Jenn, because she’s untrustworthy and mean to Nina. If votes were being split, that meant they’d only need three votes to get Jenn out.

And then Nina asked Will about his health. He said he was fine. Great! Let’s shake hands and walk away. Only, no. Nina didn’t leave it at that. “Vince is concerned about your health getting in the way of us winning challenges,” she told Will.

NINA. Nina. Nina. I’m sorry, but you’re a moron. I tried to cut Nina some slack when she super mishandled the skinny-dipping incident, because it was an emotional situation. But what was this? She totally bungled that conversation. Clearly, social skills aren’t Nina’s strong suit.

I’ve got a blank space baby, and I’ll write your name…

Will was angry, obviously, and started to seriously consider voting for Vince. Still, after all the conversations at Tribal Council I really thought it might be Jenn going home.

Nina and Vince voted Jenn. Joe voted Nina. And… everyone else voted Vince? What happened there?

So long, coconut man. I found Vince kind of annoying so I’m not really that sorry to see him go. Nina’s days are numbered now.

What did you guys think of the episode? Do I have a snowball’s chance in hell of winning with DAN???

Survivor – Cause You Know I Love The Players, And You Love The Game
https://haligonia.ca/survivor-cause-you-know-i-love-the-players-and-you-love-the-game-103432/