I missed The Amazing Race last season, never getting around to catching up once I got back from my honeymoon. I’d been so bored by the past several seasons that I had no motivation to watch three or four episodes online.

Naturally, since I wasn’t watching, I’m told it was one of the better seasons they’ve done recently.

And so, I’m back. This season of The Amazing Race has a new twist: half the teams are dating couples, and the other half are on “blind dates”. That’s right – they are literal STRANGERS who have been paired up to run the race together. 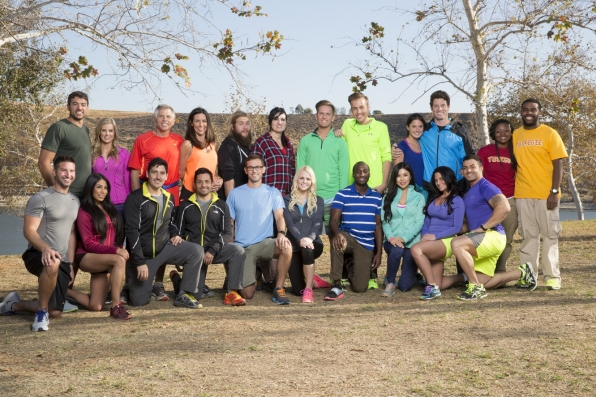 I’ve got to say, the twist is working. I love it. Over the first three episodes, it’s been really interesting to watch the dynamics of couples vs. strangers. Some of the “blind dates” get along better than others, of course. At first, the Blind Dates were doing very well – after all, they were probably on their best behavior. Real couples were more likely to become aggravated with one another. But that can only last a few days, especially in a high pressure situation, and the bickering is now beginning to set in.

One of my biggest problems with The Amazing Race over the last couple years was that the challenges bored me. So far, that hasn’t been an issue. One of my favorite challenges so far was when teams had to deliver trays of food via zipline. Champagne, soup, etc. Nothing could be spilled. That’s hard!

I used to really love this show, so I’m happy to feel invested in the teams and the outcome once again. I already have some favorites. If you’ve seen the most recent episodes, click through for more.

OK, so I want to talk about the blind date couples first. Kurt and Bergen? They’re breaking my heart. Poor Kurt is from some one-horse town in Kentucky and wanted so desperately to meet his first ever boyfriend on this show. And what does he get? A teammate who’s the spitting image of himself! They’re like twins, and Bergen is definitely not interested in being anything more than friends. I hope this inspires Kurt to move to a bigger city where he can actually date people. Kurt and Bergen have fought a bit so far, but nothing worse than any of the real couples.

The WORST blind date is Hayley and Blair. Oh boy. Hayley’s a nurse and Blair’s a doctor, but their common ground begins and ends with the medical profession. So far, Blair seems like the nicest guy on earth. Why? Because Hayley is SO ANNOYING and he has politely kept his mouth shut thus far. He made one little mistake during the ziplining challenge, and she wouldn’t let it go. She talked and talked and talked about how he messed up, and he should have listened to her, and now they’re only in second place, and this is why nurses are better than doctors. It was incessant. I wouldn’t have been able to hold back my irritation.

Tyler and Laura are another blind date couple, called “Team So Cal” because they’re both from Southern California. They seem nice. She sure looks a lot like a blond Amy Adams. Then there’s Jackie and Jeff, who are getting along so well that they’re already sharing a room. She’s a Vegas showgirl and he’s a meathead, so it’s a match made in heaven – so far, at least.

The last bind date couple is Jeilani and Jenny, both lawyers. Early on, I thought they had the best chance of all the blind dates because it seemed like they were getting along really well. But in the preview for the next episode, my theory is proven wrong.

Aly and Steve are one of the couples, and they’re two Olympians who met at Sochi. So far, they seem like frontrunners. They get along well and they’re strong – I wouldn’t be surprised to see them in the final three.

Then there’s Harley and Jonathan – Jonathan Knight, of New Kids On The Block! They’re nice and seem like a great couple, but they’re always towards the bottom of the pack. This week, they were saved by a non-elimination leg. I don’t expect them to be around for too many more weeks.

Rochelle and Mike are “Team Truck Stop Love”, because they met at the truck stop where Mike works. Rochelle is an engineer who does roller derby, and has a son who she hasn’t yet introduced to Mike. So far, Mike seems like the nicest guy ever. There have been two dancing challenges, and Rochelle really struggles. I don’t think I’ve ever seen a partner as upbeat and supportive as Mike.

Coming into this season, I knew there had to be at least one proposal. You don’t bring a bunch of dating couples on without knowing at least one person has a ring in his/her pocket. That couple was Matt and Ashley, hairstylists from New York. This week, Matt and Ashley were towards the bottom of the pack when Matt messed up and forgot the fanny pack at the challenge site. They had to turn back, and Matt was so upset with himself.Ashley was calm and supportive, and they still arrived at the pit stop in plenty of time. (I think everyone knew that New Kids On The Block was likely last, since they’d been screwed by poor flights.)

Matt proposed at the pit stop. I had to wonder if his plan was to do it so early, in that kind of setting. (The other teams were all so close that everyone was there.) I think he was overcome by emotion, because Ashley was so supportive even though he’d messed up. Normally I hate stuff like this, but it was kind of sweet.