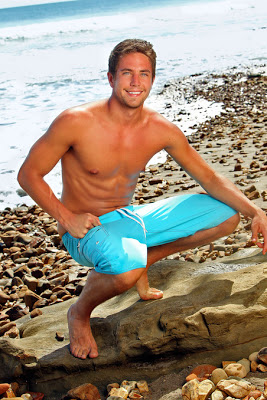 It’s hard to like a guy named Benry. It’s like he’s in an annoying Hollywood relationship…with himself. But it’s more than the name. He’s a club promoter in L.A., he called a girl a dirt squirrel, his intro video wasn’t super flattering and he really didn’t do much during the entire season of Survivor: Nicaragua.However, after talking to the guy I think some of that can be blamed on his rather invisible edit this season. Here’s what he had to say about his run on the show.
“Last night was definitely a blindside,” Benry said. “I think they thought I’d be a bigger threat [than Fabio], ultimately.” Benry said he had outperformed Fabio in the challenges and thought he could possibly win his way to the finals, and that “I didn’t piss too many people on the jury off and I’d be dangerous to sit next to in the final three.”
All his points were valid, and in the latest Survivor: Ponderosa videos Benry did get a very warm reception from most (coughAlinacough) of the people on the jury. Maybe he could have won, if only things had gone a little differently.
“I was frustrated when Marty got voted off,” he said. “I was in the process of aligning with him.” Benry also said it would have been interesting to see what would have happened if Chase hadn’t played with his heart and had voted out Brenda early on in the game. “I’d have liked to have played with Shannon as well.”
As for people he didn’t like, Benry said he didn’t regret calling Alina a “dirt squirrel” when he voted her off. He said earlier that day she’d been scrambling to save herself and had told everyone he’d once stolen bananas and that he was a physical threat. (I don’t know about you, but that sounds like a fair enough way to try and save yourself.) “There’s a lot that went on between Alina and I,” he said. “I don’t regret it at all. She’s a dirt squirrel.” (To be fair, Benry seemed to have a slightly different interpretation of the phrase than UrbanDictionary.com provides.)
Benry said he’s always been a fan of Survivor, and was in a place of work one day when he met a casting director for the show. “I submitted an audition tape, which kicked ass,” he said, and the rest is history. He said Survivor “couldn’t have come at a better time in my life” because it meant taking a break from working in L.A. where he had a BlackBerry practically glued to his hand. Now that he’s out of the game, he’s not so impressed with the final six. “I am kind of disappointed,” he said. He thinks Sash played a good game, but “everyone else should probably be gone by now.” Had he made it to the finals, though, “I would have deserved it. I think I would have probably physically won my way in there.”