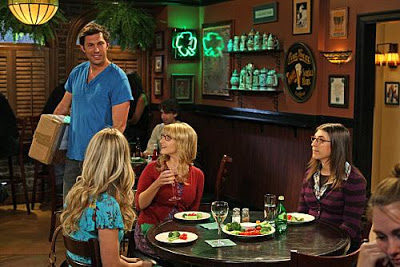 I’m still not sure how I feel about last night’s episode of The Big Bang Theory. I didn’t laugh as much as I normally do, but I also can’t pinpoint exactly what was missing. It had all the components of a good episode – a hilarious Raj/Howard subplot, some great one-on-one time with Penny and Sheldon, and we got to see Sheldon take social awkwardness to a whole new high as he became a pimp of sorts. And yet…it just fell a little flat for me.
The episode centered around Amy Farrah Fowler’s discovery that she was sexual aroused by one of Penny’s ex-boyfriends. She determined this after Sheldon assessed all her symptoms and came to the conclusion that it was either an alien parasite or sexual arousal. This, of course, devastated him. He thought Amy was beyond such animalistic urges, but apparently she’s just as unrefined as Penny.
My favorite moment came when Penny told Sheldon that there was something he could do about Amy’s urges. For a terrifying moment it looked like Sheldon might try to engage in “coitus” (though I have to say, I knew what the writers were doing and didn’t really expect it to happen) but instead Sheldon called up everyone in the phone book with the name “Zach Johnson” and then tried to pimp Amy out to him. She was into it until she found out how stupid he is, and then she decided to instead use Sheldon’s Star Trek technique to suppress her urges. Vulcans 1, Humanity 0. 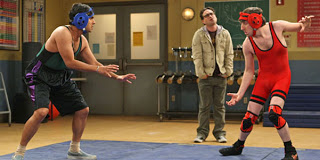 I really dug Howard and Raj’s little subplot, which saw them going to great lengths to decide who would be the superhero and who would be the sidekick should they ever be blessed with superhero powers. From a radioactive rat. First Howard tried to get Raj to stick his hand into a jar with a tarantula, which he did once he saw that it was already crawling up Howard’s arm. Then they donned some truly awesome wrestling outfits and circled each other for hours, both guys too afraid to throw the first punch.
Overall it just felt like a solid but unmemorable episode. What did you think? Are you relieved that Sheldon and Amy only held hands for a few seconds before dismissing the idea of, you know, solving Amy’s problem together? Do you like seeing Penny, Bernadette and Amy hang out together? (To me, that’s the best thing to come out of the introduction of Amy’s character.) And who’s the sidekick – Raj or Howard? (I’m saying Howard.)
Here are some of the funnier lines and moments from “The Alien Parasite Hypothesis”: