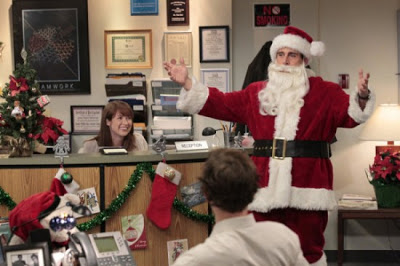 Best episode of the season? I think so. Last night’s Christmas episode of The Office had me cracking up every few minutes and the characters delivered more hilarious lines than I could ever hope to write down for the review. It shouldn’t come as a surprise that the episode was written by comedic genius Mindy Kaling.
The return of Holly could not have been executed in a better way. She was returning because Toby had to go for jury duty…on the Scranton Strangler case! She’s still living with her boyfriend, A.J., but it’s unclear if they’re really happy together. And although she was making weird sounds and talking in bizarre voices with Michael the minute she arrives, the situation quickly degenerated into something much more inappropriate.
As soon as Michael heard that Holly was coming back he postponed the office Christmas party so that he could throw a much classier and expensive one in her honor. He dumped his Santa suit for a red velvet blazer and creepy hat, put up really nice decorations and told Erin to watch for Holly to arrive.
The funniest gag of the whole night (and possibly one of the funniest things ever on the show) was how Erin completely and totally did not see the appeal of Holly. At all. She delivered so many awesome lines and played it perfectly so she didn’t even come across as mean. Here are some: 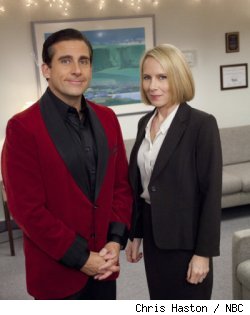 So, so awesome. Michael was crushed when he found out that not only was Holly still with A.J., she was living with him. She had a cutesy story about how he gave her a doll of Woody from Toy Story and everything. As Michael got more upset (I’m sure it didn’t help that his arch-nemesis Toby was the center of attention as a juror on the Scranton Strangler case) he got more and more inappropriate. He threw Holly’s Woody doll into the garbage. Then he poured coffee on it. Then he tried to blame it on Toby.It was embarrassing, and it was 100% classic Michael Scott.
What was so great about this episode was that there were a lot of subplots and small jokes with most of the cast, and they were all fantastic. Nothing brought the episode down. The snowball fight (war, really) between Jim and Dwight just had me cracking up. Jim threw one snowball and Dwight, and then they agreed to have a snowball fight on the day of the first real snow – which, of course, was the day of the rescheduled Christmas party. Dwight ambushed Jim in the parking lot by disguising himself as a snowman and beat the crap out of Jim with snow. There was blood on his shirt! But it didn’t end there. He surprise-attacked Jim everywhere, even disguising a snowball launcher as a Christmas gift with Pam. When Jim finally tried to get even with a snowball and a lacrosse stick, Dwight moved and he smashed a window instead. But nothing was more amazing than when Jim left at the end of the day, a beaten man, only to find about a dozen snowmen in the parking lot. Which one was Dwight? Jim started smashing them, but none of them were hiding Dwight. He was hiding on the rooftop, having successfully replaced snow with fear. Only Dwight could employ psychological warfare in a snowball fight.
Beyond the Michael/Holly storyline and the Jim/Dwight storyline, though, there was still so much going on. Lots of fun little digs about Angela’s (State) senator boyfriend. Lots of bragging from Angela about her (State) senator boyfriend, and “complaints” about having to deal with the media. Then there was Toby, basking in the attention from his jury duty. I love Toby. I always have. He’s just so…unfortunate. How can you not feel bad for Toby? He is the Charlie Brown of The Office, and every time something unfortunate happens to him it’s funny because, well, that’s just so Toby.
Darryl’s subplot was also great. He was heartbroken to learn that his kid (who was all kinds of adorable) didn’t want to spend Christmas with him, so Pam and Andy helped him reconnect with her at the office Christmas party. Andy as the Grinch was hilarious, especially because his idea of a fun challenge was to ask topical political questions.
In the end Pam told Michael about Holly’s doubts regarding her non-committal boyfriend and told him to be patient. I hope the Scranton Strangler case lasts a long, long time because I really want to see Michael leave the show with Holly. After all these years, don’t you want a happy ending for him? The first episode of 2011 is called “The Ultimatum”, so I’m excited for some more Michael/Holly development.
Now here’s a list of some of the hilarious moments and lines from the episode. It will be very, very long and still won’t include everything that made me laugh. This episode? It’s getting a second viewing.
OK, I’ll wrap it up with that – but there were SO MANY awesome things about this episode!