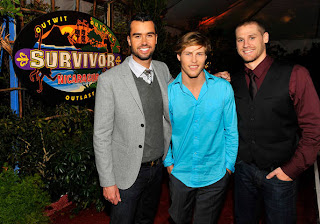 Are you all Survivored out yet? I spoke to Fabio and Sash (Chase was unavailable, but does anyone really care?) on Monday, but after posting so much else about Survivor, the interview fell into the cracks. Part of that is that it wasn’t particularly fascinating. We all know how Fabio won – he kicked butt in immunity challenges and was a generally likable dude – and for me, the real question had to go unanswered – how the hell did Chase get so many votes?
Fabio and Sash both seemed like nice guys, and in particular I think Sash didn’t get the best edit this season. Obviously, from both the final tribal council and the final vote you can tell he wasn’t particularly well liked. But he’s a true fan of the game, and I don’t think he was given quite enough credit.
Fabio said after the final tribal council he felt pretty confident. “Yeah, coming out of the last Tribal Council with all the questions that were asked and the overall mood, I really thought that I’d won,” he said. “I actually expected a different vote, maybe 6-3 but when it came down to 4-4, I thought maybe I was wrong and I got scared for a minute!”
Fabio said that the key to his game was playing it cool and knowing when not to panic. “”I would admit that I was on the wrong side of the vote a lot of the time, but I always knew that my name wasn’t being tossed around so I usually felt safe,” he said.
“I did have a game plan going on, but I believe chance and improvisation are a big part of it. Looking around, getting a general sense of people and adapting to your environment, you know. But I do know I’m goofy, I’m only 21, so I think I was really underestimated. Marty certainly wouldn’t have expected to be outwitted by a 21-year-old and neither did anyone else. Eye contact is another part of it. It doesn’t even have to be chats about the game, just have a conversation with people and pick up things you can exploit later. You also have to be careful where and when you talk to people. I wasn’t politicking all the time but people would come up to me and tell me things.”
Fabio said he thought Dan would have been a threat in the finals “because he’s the kind of person who wants to win, even if he doesn’t need the million. I think he would have put together a pretty aggressive speech.” He also said he thinks he would have voted for Chase, and that if the final three had been Holly, Sash and Chase he thinks Chase would have won “by a landslide”. Fabio said Chase “didn’t calculate outcomes very well,” though, and that was a weakness in his game.
Both Fabio and Sash said they’d play Survivor again, and Sash said even though he didn’t receive any votes he was happy with his game. “I don’t regret anything I did in the game,” he said. “If I could go back I’d play the exact same from Day 1 to Day 39.” However, Sash was surprised by the final vote. “I was shocked. When I left Nicaragua I really thought there’d be a good chance of a three-way tie.”
Sash said Kelly and NaOnka had originally been devastating to his game because he’d been planning on taking them to the finals “because it would be an easy million dollars.” He was also disappointed that they quit because “I don’t think NaOnka and Purple Kelly respect the game the way I do.” He said their being on the jury could have hurt him because they might have voted for him, but that as a fan of the show he likes the new rule.
What do you think, were people a little to hard on Sash? Do you buy that Fabio had a strong game plan? (My answers are yes and yes.) And are you glad Survivor: Nicaragua is done so we can move onto Redemption Island?