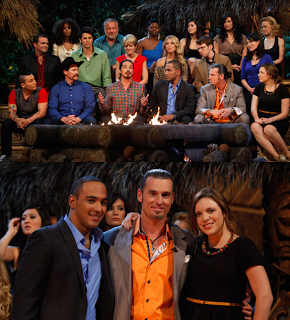 Speaking of Ozzy, is he Orlando Bloom’s long lost Hispanic doppelganger? He is. I’m sure of it. He’d also $100,000 richer because he won the Player of the Season award by a landslide. Sigh. I was hoping for Dawn or Cochran, but Ozzy sure does have a lot of fans out there. The kind of fans who like challenges more than strategy. Probably the kind of fans who didn’t mind that the finale was delayed because of a stupid football game.

*Funny thing to note: During the football game that delayed the show, Denver Broncos quarterback Tim Tebow was finally shut down after going on some crazy winning streak that he attributed to God. And then Brandon lost the duel and Coach lost the game. I guess God was on vacation last night?

When Probst talked to Cochran, he was predictably hard on the poor guy. Probst, why must you be so condescending when you talk to him? Was it the sweatervest? Cochran talked about the reception from fans, which has been positive on the streets but negative on the Internet. “Eeeeeeverybody on the Internet hates you!” Probst said before cutting to commercial. What? Why did he just reaffirm Cochran’s statement that people on the Internet hate him? Why? Poor Cochran. Someone send him the link to my blog, perhaps it will help cheer him up. At least Cochran was funny, and even had a clever answer for the much dreaded “Is Survivor helping you get dates?” question. When on Rob Cesternino’s podcast recently, he warned Cochran that Probst would send this question his way and Cochran said there was no good way to answer it. “No” sounds pathetic. “Yes” sounds also pathetic, and maybe a little creepy, because he’d only be getting girls due to his fleeting fame.

Speaking of Cochran, Jim had some harsh words for him. Give it up, Jim! You sucked at Survivor too! Remember when you kept Cochran and voted out Elyse? I still maintain that even if things had gone Savaii’s way and Jim had made it to the end, he had no shot in hell of winning. He’s too slimy.

The most awkward moments from the reunion show surrounded Brandon and the Hantz family. Good god. If I never see another Hantz, it’ll be too soon. Brandon talked about his personal struggles, saying “I lived a real rough past” and “I grew up in the church” within the same breath. What? Huh? This kid is only 19 and has already been a part of the church, been a part of gangs (or “gangs”?), found God again, got married and had kids and went on Survivor. How long did the gang life thing last? Twenty minutes?

Of course, Russell was in the audience with a sour look on his face. He’s a bully on Twitter and has been talking smack about Brandon all season long. Naturally Probst went over and asked him about Brandon – poor Brandon, who’d already said that the majority of his family wasn’t supportive of him and hadn’t shown up to the reunion show. But did Uncle Russell say “No Brandon, I’m your family and I’m here and I’m proud of you”? No, of course not. He said if Brandon wanted he’d sit down and shut up, or he could critique the game. Before I could finish my prayer that he’d sit down and shut up, Probst demanded the critique. Brandon didn’t even get a say. And then Russell barely critiqued anything! He spent a full minute on how he’s the greatest of all time, and then he added that Brandon literally didn’t do one thing right. I hate this dude so much. I will lead the letter writing campaign if Probst actually goes through with a Russell vs. Brandon season. That would be the worst.

And that was about it. Ozzy tried to fashion himself into a role model by encouraging kids to conquer their fears. Look, I’m not one to bubble wrap kids and made them wear helmets to sneeze, but I also don’t think we should be encouraging kids to like, go swimming and try and stay underwater for longer than they think they can. That’s what drowning is – not going to the surface for a breath.

Dawn had a nice moment where she talked about how people should challenge themselves. Probst took an awkward route to announce that Edna is pregnant. Christine and Stacey confirmed that they’re still friends – Christine is one of a couple people (Cochran, Dawn) that I wouldn’t mind seeing play again. And then we got a preview of season 24 of the show, Survivor: One World – it has a cool new twist, and one that I hope (fingers crossed everyone!) will mean Redemption Island is no more. Both tribes will live on the same beach together while competing. They can choose to share their belongings or try to remain separate. I think this could be cool. What do you guys think?

All in all it was just an OK reunion show, but I think this season of Survivor ended on a good note. It was a little dull overall, but two exciting final episodes and a deserving winner mean it should end up about midway on my rankings. Check that out soon!