Hey guys, I’ll get to my weekly Survivor recap in just a few, but first I need to perform some spoken word poetry to calm the nerves, you know?

Watching Survivor and foldin’ my laundry/why Semhar’s even here is like, such a quandry/sure she’s kinda hot and the guys must like her/but her rhyming skills are lacking, don’t know who invited her/she has cool hair and doesn’t wear much clothes/maybe she’s a model, who really knows/she’s only on the show to try and get famous/but in another couple weeks we’ll forget what her name is.

Oh my gosh you guys, I’m like crazy relaxed now. Thanks for taking the time to let me do that. Let’s get to this recap.

OK, thank god Semhar’s gone, right? I mean, Christine is kind of annoying but at least she wasn’t reciting poems to herself 24/7. Before the challenge, Semhar? Really? Come on. Anyway, before the duel both Semhar and Christine were feeling pretty low about their situations. Semhar was struggling with her abandonment issues, because her tribe had abandoned her JUST LIKE EVERYONE ELSE IN HER LIFE. Except that with these people, who had only just met her, it was less abandonment and more “Hmm, no thanks.” I mean, when I pick up a banana at the grocery store and then put it back down I’m not abandoning it, I’m just giving it a pass.

Christine’s frustrations with being voted off were more focused on one person – Coach. “He thinks he’s King Farouk,” she told Semhar. I feel like Semhar was making a mental note to Google that when she got home in case it was a good comparison for some future poetry. (This man I know is like Farouk the king/he abandoned me like it ain’t no thing/it doesn’t matter that you don’t know him/cause he’s so corrupt I’m gonna overthrow him. -I think I could make a living off this, guys.)

I thought it was interesting that both tribes allowed the returning players to attend the first duel – Coach was accompanied by Stacey and Ozzy by Elyse. They’re really just letting these guys go the Boston Rob route and lead, aren’t they? I’m not sure if I should give credit to Russell’s tribe for having the sense to get a veteran player out, or mock Russell himself for being the only veteran player to not know how to use his experience to his advantage? Oh who are we kidding, the answer is always mock – Russell, you’re the only veteran player who wasn’t able to convince your tribe to keep you around! Lame!

For the duel, Semhar and Christine had to build long poles one piece at a time, without ever dropping a totem balanced on top. Unfortunately for Semhar, her creepy pre-game poem didn’t help her keep steady, and she dropped her totem. Hey, at least now you can have some new material, Semhar! The giving birth stuff wasn’t great. Anyway, Semhar’s outta there – bye! (And a friendly tip? The braids weren’t working for you.)

Before Coach had headed to the duel, though, there was a spot of trouble at Upolu – thanks, of course, to Little Hantz. Oh, Little Hantz. This kid has some really important screws loose. First of all, he returned from Tribal Council and said “I was almost 150 percent sure Mikayla was going home.” Ugh. Little Hantz, I am not a math person, but even I know that you can’t be more than 100% sure of anything. And if you’re “almost” sure, then you would not even be that – you’d be more like 96% sure Mikayla was going home. But I guess this is what happens when you’re too busy hanging out under the bleachers and tattooing “Loco” on your neck with a Bic pen and a lighter during 9th grade math class.

Brandon was having some serious internal struggles with his good and evil sides (I am growing more and more concerned that this guy is going to suffocate Mikayla, and then himself, in the middle of the night) and so he decided to come clean to the tribe and tell them all his true lineage. Three episodes. The kid made it three episodes before he let the cat out of the bag to everyone. Pathetic. No one openly judged Little Hantz because of this, but Stacey said it was all “water up under the bridge”, which I’m hoping was a really clever way of saying “the water is most definitely above, not under, the bridge.”

Later, Mikayla decided to confront Little Hantz and find out what he has against her. Personally, this is something I would have addressed at Tribal Council…you know, with witnesses present. The intimate confrontation was much more uncomfortable, especially since instead of answering her Brandon decided instead to gather the tribe around for a very awkward group meeting, during which he demanded to be kept out of the very drama he himself had created. Sophie (my girl in the office pool) wasn’t buying it. “He inherently in his blood line is a devious jerk,” she said. She also said Brandon probably likens Mikayla to “the whore of Babylon”, which was a much better biblical reference than the one Brandon himself, a born-again Christian, had managed to come up with.

Unfortunately, Sophie isn’t smart enough to suggest that they replace Brandon in their alliance with someone more stable, like Edna or Mikayla or ANYONE ELSE AT ALL. Don’t just say “I hope this doesn’t come back to bite us in the butt”, this is for a million bucks! Take precautions to ensure that it doesn’t!

Let’s take a break from The Hantz Show to check in at Savaii from a brief moment, shall we?  Ozzy decided that he can’t keep the information that he has the Hidden Immunity Idol to himself, because that would be too logical – instead, he must share this news with a trusted confidante. Except this is Survivor, and those don’t exist. So he tells his bro Keith, who immediately goes and tells Whitney. Nice going, Ozzy. Next thing you know this will be like a game of Telephone and someone will be whispering to Cochran that Ozzy is a smitten community child. 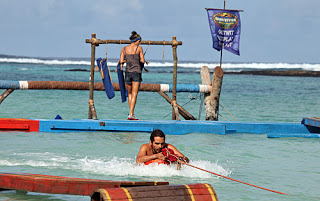 Challenge time! Even though I don’t love that the addition of duels to Survivor means a lot of combined reward/immunity challenges, I did love this challenge. It was pretty complicated (to explain, anyway – lots of steps) but fun to watch.

First, players from each tribe had to run out to a platform in the water with a boogie board to retrieve five items. They were attached to a cord being fed by four other members of the tribe. I think both tribes made a bit of a mistake here – the stronger players should have been feeding the line, not running. Ozzy kept getting stuck because weak players on his tribe like Cochran and “Papa Bear” (still hate that nickname) couldn’t feed him the rope quickly enough. I get why Ozzy, a surfer, stepped up for this part of the challenge, but it just really didn’t work out.

Next, two members of each tribe had to use grappling hooks to collect other items, and then a series of flags had to be put in order to piece together the tribe’s flag. Whitney put in a really good effort to try and catch up for Savaii, but Coach was also good with the grappling hooks and pulled out a win for Upolu.

Survival of the Least Weak

After losing the challenge, Savaii had to decide if Cochran or Papa Bear was the biggest detriment to their tribe. They’d pretty much settled on Papa Bear, but he wasn’t going down without a fight. First he ran into the woods (apparently the first time anyone had seen him run) and tried to find the idol. When that turned out to be a fruitless endeavor, he pulled a Yau Man and tried to fashion one. Or he stuck a rock in his underwear, anyway, hoping the mysterious bulge would be interpreted as a Hidden Immunity Idol. The problem was, he played it too obvious – anyone who’d really found the idol wouldn’t have returned to camp grinning like the Cheshire Cat. Cochran immediately knew he was bluffing.

The tribe seemed to briefly consider that they should play it safe and vote out Cochran (and I think Jim did vote for him?) but generally people weren’t fooled, and Papa Bear was sent packing. It was a pretty obvious elimination, he’d really shown his weakness during the immunity challenge.

So next week Christine and Papa Bear will face off! If I were a betting girl (I’m not – three slot machine pulls and a couple rounds of blackjack at the casino gives me Woody Allen level anxiety) I’d put my chips on Christine. What do you think? What did you think of this week’s episode? Sound off below in the comments!