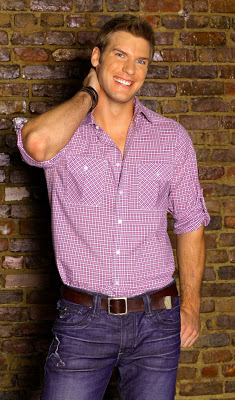 We’re in the home stretch, guys! On Friday night, Sweet Home Alabama‘s Tribble will make the ultimate decision – country girl or city girl? Tristan and Jackie are the two women left in the running, and I know from the blog comments that y’all have some strong opinions about them. So I chatted with Tribble for a today about the girls, the show and what’s in store for us on Friday night.

“You feel like over a season you get to know someone,” Tribble said, and he knows fans of the show “aren’t afraid to show their opinions. I appreciate hearing their opinions, but I also know they didn’t live it and experience it like I did. I couldn’t be happier with the final two girls. But mostly I like that people are getting into the show.”

Since Tribble sent Ashley Ann home, who I think we’d all agree was the show’s villain, a lot of, uh, dislike has been directed towards Jackie. “She’s so sweet, down to earth and real, maybe that wasn’t shown as much. She comes from the city, she’s not a Southern girl, and she catches a lot of heat,” Tribble said. “She’s one of the sweetest people I’ve ever met, is so real and she’s got her career…I’m intrigued by her.”

Other fans have questioned Tribble keeping Tristan around when she just lost her dad – something Tribble said he didn’t know about until their first date. “I felt for her, and it added to our connection but it was not the reason I kept her around by any means. It was the chemistry between us.”

On last Friday’s episode Tribble’s parents came to visit, and they went a lot easier on the girls than Devin’s dad went on the boys last season. “That’s how my parents are, I knew they wouldn’t grill them but just wanted to get to know them,” Tribble said. “Any negative feedback would have been impossible because of how great those four girls are, but if they’d said anything that raised a red flag, I would have listened.”

Now if y’all have been reading my blogs this season, you might know that my favorite girl from the first episode was Cassie – and I think a lot of viewers agreed. So I had to tell Tribble, I was a teensy bit mad at him. “That past elimination with her and Courtney, that was one of the the toughest things,” Tribble said. I almost had a panic attack with all the emotional build up, and it was overwhelming.”

OK, so maybe you can’t stay mad at him. “Cassie’s gorgeous, and so sweet. She’s Southern, or not exactly Southern but like, Midwestern, down-home country, and that was attractive.” But, Tribble said, it really came down to the connection and a gut feeling, and he felt he had more chemistry with Jackie and Tristan.

Yes, Jackie. So I had to ask some more about her – like how some of you guys have pointed out how she’s referred to the show as a “game” that she wants to “win”. “I don’t feel that, and I never gathered that from her – that it was a game or she was only there for game,” Tribble said. “I eliminated the one girl who was chasing fame.”

When Tribble chooses between Tristan and Jackie, it could mean choosing between living in the South or in a place like New York. So was that a big factor? Tribble says it wasn’t.

“The country, if you’re raised right and you’re a gentleman, it’ll stay with you. I love living in the South and everything that embodies, but that’ll be with me no matter what. It was about whether I saw a future with the girl, and the chemistry that decided it.”

And on Friday, we’ll find out what that decision is! Tribble said it was a hard choice to make. “I had two amazing dates with two amazing girls.” Tribble said we’ll get to see him go to New York with Jackie and take a sunset plane ride in Mobile with Tristan. And no, despite my slight protestations, he said Jackie’s dates weren’t more glamorous.

The whole process of the show lasted about six weeks, and Tribble said it was an intense experience.

“When you’re down there, everything moves faster and is amplified. You don’t have a job to worry about, or a cell phone, Internet or TV. Every conversation is about the girls and dates, it almost screws with your mind so you have to keep perspective. I got to know the girl I chose so much better than I normally would. I kind of equate it to dog years, and at the end it felt like breaking up with a girl you’d been dating for almost a year.”

I don’t know about you guys, but I can’t wait to see Friday night’s show! (And, fingers crossed, a new season starring Cassie? Am I right?)