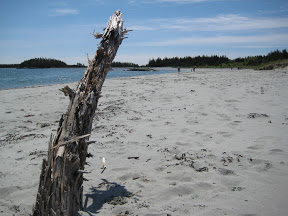 It was a glorious Sunday morning.

It was the morning after a family gathering where we dined on lobster and potato salad. The sun was strong and the wind was weak. The black flies were either sleeping in or the bug spray was really working.

It was the perfect time to take a drive “down the head” – that’s Taylor Head Provincial Park. It’s a gem of a park along the Eastern Shore known for it’s white powdery sand and scenic hiking trails.

It’s also known for it’s cold water. In fact, I can only count on one hand how many times I swam in the water as a kid. One time I was told by a camp counselor that helicopters dropped ice cubes into the water. Why? I never asked. Perhaps my lips were shivering too much to ask. 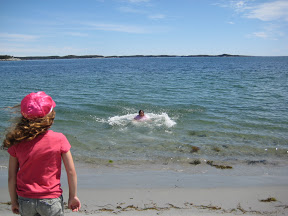 As my father, sister, cousin, and friend where walking along the beach, my sister out of the blue said “I’m going in!” We said in shock and horror “where”, she said “there!”, pointing to the water. Before you could say “I dare you” she was running toward the water and jumping in. Clothes and all. You know that happened next? We proceeded to jump one by one into the water as my daughter looked on.

You know what? The water was nice. Then again, I was fully clothed.