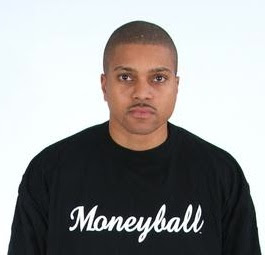 If you’ve been to any of the Halifax Rainmen home games this season, the guy that’s draining all the threes with ease is Desmond “Moneyball” Ferguson.  The guy got the nickname back in the day from his old AAU teammates, Kevin Garnett and Robert “Tractor” Traylor.  Desmond, from Lansing, Michigan, which is also the home of Ervin “Magic” Johnson, played for the NBA’s Portland Trail Blazers as well as other pro basketball leagues around the globe.  He played for the Manchester Millrats last season and was named to the PBL All-Playoff team.   What’s more impressive is that Moneyball also owns his own clothing company named Moneyball Sportswear specializing in athletic apparel.

I got the chance to ask Desmond about his company, the biggest joker on the Rainmen squad and his favourite Michael Jackson tracks.
______

Romy (Haligonia.ca): Judging from your hoops resume, you’ve played all over the world and you’ve even spent some time in the NBA, what’s your opinion of the city of Halifax so far? Is this your first time playing for a Canadian team?

Desmond Ferguson: This is my first time playing in Canada. I played with the Manchester, NH team last year, so we came up here a couple times to play. But this is actually my first time playing for a team in Canada. The city of Halifax has been great thus far. I haven’t been a whole lot of places, but so far, so good. I feel we have the best fans in minor league basketball and that played a part in me becoming a member of the Rainmen this season. 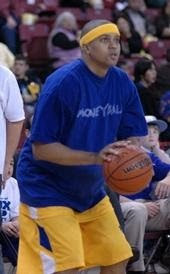 Romy (Haligonia.ca): You’ve had stints in Europe, Asia, and throughout the US, what were some of your more interesting/unique playing experiences?

Desmond Ferguson: Really, they all were. I have been blessed to use basketball as a tool to experience living in different countries, different cultures, and different ways of life. I have stories for days about many of the places that I have been, good and bad, but that would take forever. I value all of those experiences because they help shape the person that I am today.

Romy (Haligonia.ca): The Rainmen have a new look this year with their new uniforms and your company, Moneyball Sportswear, designed the new unis. How did you get involved with running your own sportswear company?

Desmond Ferguson: I never really wanted to work for anyone else. I started off as the neighborhood barber at the age of 12, so I always had ambitions of being an entrepreneur. So, with the downtime that I had my first professional season playing in Holland, I came up with the idea of wanting to own a basketball uniform and apparel company. Many athletes play sports for years, but don’t really prepare for when they can no longer play that sport and then they are stuck in no mans land. I’ve seen it first hand, so I don’t want to fall victim to that. But after brainstorming about the potential business venture I just did my research and seen that I could make it work. I knew that I wanted to be involved with basketball in some shape, form, or fashion, because of my love for the game… and 7 years later, here we are.

Moneyball Sportswear, a small business that is growing year by year. Check out the website when you get a chance.

Desmond Ferguson: Yes. I think Andre has done a good job of getting the right mix of players together to compete at a high level. My goal in coming here is to help get this team to the playoffs and bring a championship to Halifax. So, yes, with the team that we have, I feel that we can get it done. We just have to continue to improve as a team and everything else will take care of itself.

Romy (Haligonia.ca): Who is the biggest jokester on the team?

Romy (Haligonia.ca): Let’s talk some NBA, who was your team as a kid? What current player do you like watching nowadays?

Desmond Ferguson: Well, I’m from Lansing, MI so growing up, I was a little bit torn. I obviously was a Detroit Pistons fan as they went on to win back to back NBA Championships in the late 80’s. But at the same time, there was this guy that is the greatest point guard to ever play the game, that is from Lansing, MI, and that happened to play for the Los Angles Lakers. He goes by the name of Ervin “Magic” Johnson. lol. So, to make a long story short, I was a fan of both teams. I would say the hometown Detroit Pistons had the slight edge though….. As far as the current player that I like watching now, I would have to say Lebron James.

Desmond Ferguson: I think the whole Arenas situation is unfortunate. I wish that it could have been an in-house type of thing that didn’t get out to the media. But sometimes when you make your bed, you have to lay in it. I don’t wish bad on anyone. I hope that he is able to come out in the best situation possible under the current circumstances that he is faced with.

Romy (Haligonia.ca): I read on your blog that you were a big MJ fan (Michael Jackson, that is), let’s hear your fave five MJ tracks.

Desmond Ferguson: My favorite five MJ tracks are (in no particular order):

Romy (Haligonia.ca): What current artists are you into right now?

Desmond Ferguson: I listen mostly to Hip Hop and RnB. Nas is my favorite. The early to mid-90’s era of Hip Hop is what I love. Wu Tang, Biggie, A Tribe Called Quest, Outkast, Dr. Dre and Snoop, etc. On the RnB tip Trey Songz is hot right now. I like Musiq Soulchild, Donnell Jones, John Legend, just to name a few.
_______

To find out more about Moneyball Sportswear, visit MoneyballSportswear.com and you can catch Desmond at the Halifax Rainmen home games.  Thanks again to Desmond for participating in our Q and A.