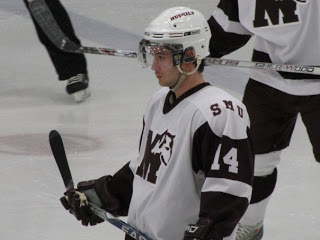 Sullivan and Tigers Rebound on the Rock
After a disappointing home stand last weekend that saw the 2009 AUS Champion Dalhousie Tigers men’s basketball team drop back to back games to Saint Francis Xavier and Cape Breton, John Campbell’s troops swept the rebuilding Memorial Seahawks in St. John’s to get back in the thick of the AUS playoff race.
Although it’s a virtual lock at this point that the X-Men and the Capers will finish 1-2 in the hotly contested conference and receive a first round bye at the championships in Sydney, the Tigers are battling the Saint Mary’s Huskies for third place.
The Huskies were swept at the Tower over the weekend by a high powered Capers team that appears to be getting more dangerous every week. Heading into the final month of the regular season the Huskies are only 2 points ahead of the Tigers in the standings. The teams have a home and home series in February with 8 points up for grabs.
In St.Johns, 5th year senior Andrew Sullivan had his first big weekend of the year in leading the Tigers to back to back wins. Sullivan averaged 18 ppg and hit 7 of 8 three point attempts to break out of a shooting slump that had dated back to November. Simon Farine added 20 points in Sunday’s finale. The Tigers won both games by 20 points.
The wins gave the Tigers a season sweep of the Seahawks. The Tigers will try to extend their winning streak with home games this weekend at the Dalplex vs. UPEI and UNB. Both games will be on ssncanada.ca and ckdu.ca, 88.1 FM in Halifax.
Surging Tigers Steal One at Memorial; Girdwood regains all star form.
Anna Stammburger’s resurgent Dalhousie women’s basketball team got a win in a gym that not many teams walk out of victorious.
Laurie Girdwood scored 18 points and added 10 rebounds for a double-double, leading the Tigers to a 73-69 win on Saturday night. Dalhousie led 61-45 at the end of the third quarter and withstood a feverish 4th quarter rally by the Seahawks for their 5th win of the season, sending MUN to an unheard of second straight home loss. The Seahawks have dominated competition at home throughout Head Coach Doug Partridge’s regime.
Memorial got their revenge on Sunday morning with a hard fought 62-60 win. Girdwood scored 20 points in defeat to cap a weekend performance that put the Dundas, Ontario native back into contention for another AUS all star nomination after struggling in the fall.
The 5th year senior has averaged 17 points and 10 rebounds in the Tiger’s last 3 games and has been the centerpiece of a mid season run that has seen the team win 4 of 6 games so far in 2010. Dalhousie now has 10 points in the standings and is on the cusp of overtaking the last playoff spot from the Acadia Axewomen, trailing Alise Brown’s team by one victory. The Tigers are 4 points behind UNB and play a pivotal 4 point game with the Varsity Reds this weekend at Dalplex. The Tigers also host the last place UPEI Panthers this weekend in another 4 point game on Sunday. Both games will be on ssncanada.ca and ckdu.ca, 88.1 FM in Halifax.
Tigers Win Back to Back Games at Home; Get Blown out by Huskies at the Forum
It was a week of highs and lows for Pete Belliveau’s Dalhousie Tigers. After nail biting victories over the St FX X-Men and the nationally ranked Acadia Axemen at the Dalhousie Memorial Arena, the Tigers received a solid drubbing from their chief rivals and AUS powerhouse Saint Mary’s Huskies.
After holding on to beat the X-Men 5-4 on Wednesday night, the Tigers staged a thrilling comeback on Friday to beat the second place Axemen 4-3 in overtime.
The Tigers were led by newcomer Benjamin Breault, whose highlight goal to tie the game late in the third period may have been the Tiger’s most brilliant individual effort this season.
Breault picked up a loose puck in the neutral zone and exploded past an Axemen defender to the outside before deaking out Christopher Westblom to send the contest to overtime. Fellow newcomer Jordie Berk scored on the powerplay in the extra session to give the Tiger’s their 7th victory of the season, already 3 more than the team garnered last year. (Highlights on http://www.ssncanada.ca/)
The next night at the Forum on Windsor Street, Breault scored early in the first to give the Tigers some hope against the nationally ranked Huskies, only to see SMU score three unanswered goals on the power-play to finish the period. Huskie’s forward Cam Fergus would go on to tally 4 goals in leading Saint Mary’s to a 7-3 victory.
The Huskies were without the services of Mike Danton, the former NHL player and convict who enrolled at Saint Mary’s and is expected to play the rest of the season for Trevor Steinberg’s Huskies as they try to get on even footing with the undefeated UNB Varsity Reds.
Danton was at the Forum and could be seen walking around the concourse with a couple of friends. There is heavy speculation Danton will make his Huskies debut this Wednesday in a pivotal game vs. Acadia.
The Tigers are in 6th place and trying to hold on to their first playoff spot in over five years. Dalhousie has 17 points, 1 ahead of St. Thomas, 1 behind UPEI.
Dalhousie hosts the Tommies this Friday at the DMA , followed by the visiting Moncton Blue Eagles on Saturday. Both games will be on ssncanada.ca.

Notes
There was a battle of two of the nation’s leading scorers this weekend at the Tower. Cape Breton’s 5th year senior Kelsey Hodgson and Saint Mary’s Rookie Justine Colley duelled in a 2 game set which saw the undefeated Capers rout the Huskies. Hodgson had a 33 point game on Sunday while Colley averaged 20 points over the weekend…….The Dalhousie Tiger’s Women’s hockey team are officially in a mid season slide. After finishing the first term with a 7-3 record and knocking on the door of the upper tier of the division, the Tigers have lost 5 of 6 games in 2010. Tiger’s leading scorer Jocelyn Leblanc has been out with mononucleosis and the rest of the team has struggled mightily to score. This past weekend the Tigers were outscored 11-2 on a weekend trip to New Brunswick…….Game to watch this week? St. FX, the number 3 team in Canada, vs. the Huskies at the Tower on Wednesday night. The last time the teams met was the final of the Rod Shoveller when the Huskies beat the X-Men riding the shoulders of tournament MVP Ike Ichegbu. The X-Men are undefeated in conference play while the Huskies are coming off a 102-75 thumping at the hands of the CBU Capers. It’s Konchalski vs. Quackenbush; a battle of dynamic backcourts with two of the nation’s leading scorers in Joey Haywood and Christian Upshaw; and a war of playing styles featuring the full court athleticism of the X-Men and the half court passing of the Huskies. Game time is 8:00. The women’s game should be a good one as well at 6:00…….The end of the month should be the breakthrough weekend the Dal Tiger’s women’s basketball team has been working towards. A 4 pointer against the V-Reds, who are 4 points ahead in the standings, followed by a guaranteed 4 points vs. UPEI. Carly Clarke’s Panthers may be the worst team in the country as the former Dalhousie assistant and Bishops Gaiters all star is in her first year of a massive rebuilding program in Charlottetown…..Like Volleyball? There is a big game Tuesday night at Dalplex, Huskies vs. Tigers. The Huskies are led by all -star Kerri Smit while the Tigers have been rejuvenated by the addition of dynamic Louise Facca. Match time is 7:00 and will be shown on ssncanada.ca.