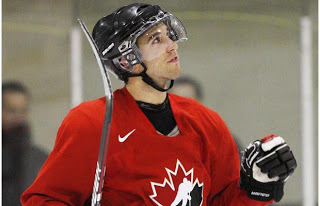 Sports and violence as a rule go hand in hand. It’s only that way because we allow it to be. We say things like “it’s a part of the game” or “well, things got heated and its hockey, it happens”.

I want to make a couple points. One is that hockey is a game. We play because it’s fun to skate and shoot and it builds teamwork and camaraderie. We enjoy the competition and the challenge of winning but also feel good when we gave our all but lost.
From a man who has played hockey at high levels since he was 5 years old and as a man who encountered violence due to hits and fights, what Cormier did was dirty hockey. He suckered an unsuspecting opponent in a game that is supposed to be all those items I previously mentioned but which is unfortunately also a business. Business dictates rules and regulations in competitions such as hockey. These rules are made to make the game more attractive to the fan
so they spend money.
Patrice Cormier’s attitude and society’s hockey expectations have a lot to do with Cormier’s actions. Cormier is sitting on the ice and is thinking “I’m going to give the crowd something to cheer about, I’m going to get that guy back for what he did in the first period and I’m going to be cool and loved by my home town fans and teammates”.
Ask any good hardnosed hockey player about those feelings and thoughts and I guarantee 9 out of 10 will admit having those thoughts. It’s the smart ones that don’t execute it on the ice and calm down. Cormier’s actions are not a part of the game; they are selfish and dangerous and go against everything sport is suppose to be.
The people in power have got to understand this and stand up to simple schoolyard peer pressure and stop allowing it. If they allow it due to pressure then let is pressure them to change the rules to no tolerance and bring back the “for the love of the game” aspect and general respect.
What Cormier did was assault. Something beyond the rules, beyond respect and even beyond typical street fighting codes. Generally a street fight is one on one and is agreed upon by both parties; somewhat like fighting in hockey.
This type of violence is mildly more acceptable by some then the sneak attack that Cormier used. So that being said, if I was in a business meeting with several people, its big money involved, people around the business world are watching, I am trying to land a million dollar deal for my company, it gets heated because both sides want the best deal possible and it gets to the point where its personalities clashing and words are exchanged and I decide I want this deal so bad, I am so angry that I hit the opposition business man and knock him out; I lose my job, I’m going to jail or at best, paying a fine and paying some debt to society.
Sport is a game, something done for fun. It can be hard hitting, intense and exciting all within the rules. Assaults are not within the rules. But because this was done in a modern day game and in an atmosphere that it has been accepted for a 100 years, it makes it acceptable and what little attention it gets, is not enough to change it.
I am amazed that the powers in charge are that naive to right and wrong in this situation. These powers have children, have friends and have morals and I assume they know right from wrong. They know it’s wrong to allow it but do nothing about it. I believe these powers are gutless to say “NO, we won’t tolerate it in our arenas, in our society and you are banned from our league”. Amazing.

I have been involved in violence before, either by choice or not by choice. I have seen the eyes glaring at me wanting to hurt me. Although I thought what that man was about to pursue was wrong, I at least honored his belief. I knew what he was doing was right in his eyes and wrong in mine but I also knew I had to defend myself if provoked.

For the most part, people know the difference between right and wrong. For those who do not, they should be and are punished for their actions. There is one person who should be punished for his actions and not based upon the rules of the game but the rules of society because what he did was beyond the rules of the simple game.
There is also a group that should be held accountable for their reaction to this. This group leading the way needs to step up and make people understand the difference between right and wrong, not only within their league but within our world. People of the world have to stop asking for violence. It’s an endless circle that is only endless because we allow it.

Steve Betts is a regular guest on Haligonia Sports episodes and colour commentator for Dalhousie Tigers hockey on ssncanada.ca.