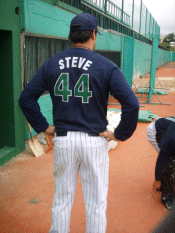 A Haligonian’s Experiences of Playing Baseball in Korea:Excerpts from the blog of Steve Betts

Edited by Bill McLean
“Since Thursday night about a month and a half ago, I have been the first foreigner in Jeju history to play baseball. That means I have been the first to do many things. I am first to play on that field, first to get a hit, first to get an out, first to hit a homerun, a triple blah blah blah. I had to mention those last two hits. Actually I have two HR and two triples but whatever…I am liking the idea of all that too as it sure is something I can tell my friends and kids about when I get older.The Jeju Dragons is a team of real nice guys that have been operating for ten years this summer. They are very similar to our rec hockey teams back home as they have leaders and guys that do most of the work and keep the things running. They are relatively the same age (mid 30’s so I fit in) and are typical Koreans. What that means is they work and drink and play hard. I fit right in. The team is a serious club. Uniforms are tailored and you have to have a uniform to play. I am having problems right now as I don’t have cleats but cross trainers and they won’t let me play without an argument. The field is astro turf and my shoes are fine for it but it’s the way they do things here and I can’t argue with it. There are lot of things I don’t agree with but my job isn’t to argue about tradition it’s to hit bombs and catch balls. I am doing that so far and loving it.”
“…….The leagues they play are tiered. Meaning that they have short seasons and then you are placed in a higher or lower league according to your performance. It’s much the same as football in the U.K.. There is much to tell about the differences in the game, the team atmosphere and the culture. I have had nothing but good experiences other than the shoe issue but it’s early and Koreans are good at changing things in a hurry. I sound negative but it’s more cautious than anything.”

“……..One game I actually had an umpire apologize several times for calling a bad strike. I was put in a hole when he called two strikes that were obviously low as even my team was yelling from the bench. They don’t yell at umpires here. Umpires are given respect and there is no arguing whatsoever with an umpire. Before each at bat or at least on the first at bat for each batter, the batter bows to the catcher and the umpire without his helmet on. Back to the umpires apologizing. He calls these strikes and he knew they were very low so when I was running back onto the field he yells at me real loud so everyone could hear him and he calls me over. He apologizes vehemently about calling such bad strikes on me. He apologized a lot and he made sure everyone knew he was apologizing to me. An inning later I am on second and he apologizes again like he stole my soul. I mean I have heard of umps apologizing but he went out his way to make sure I wasn’t mad at him or was having a bad time because of him. That is what most Koreans are like. If they know they are upsetting you they will correct it as much as they can. I am not sure if that goes for Koreans to Koreans but as a foreigner, it happens.”

“……The first few times at the field were not good experiences. I was not allowed to play the first time I was suppose to as I didn’t have cleats nor a uniform. Both items are required to play in this league. I have cross trainers but they are no good enough for some reason. Its astro turf for crying out loud! As far as a uni goes, for this game I was able to play without one but when they saw my shoes they wouldn’t let me play. So I sat my first day of ball. Not a good feeling.”
“…….Game two as better because I started it off with a bang. I was playing another exhibition game and it was with some players from other teams and our Dragon team. It was more or less a ‘live’ game. I was hitting third ( I think) and was expected to hit something hard or else the giant white guy wasn’t doing his job. The coach comes to me before every at bat, looks at me with a serious look and says “Steben, homerun” and points at me like a probation officer would to his parolee. I just nod and think to myself…wow! No pressure. Hit a homerun every time. No pressure. Yea right.”
“…….I was playing first again and it was a hot day at the field and at first. The players we have are very high and low skilled and so getting a throw at first can be an adventure to say the least. I am tall and semi-mobile so getting balls is easy enough but when it’s coming off turf it’s a bit of a trick. I got the hang of that soon enough but wasn’t expecting so many high throws, so many low throws and so many wild throws. I liked the action but we sure need some infield practice. I could see the heat wave coming off the field as the ball approached it was so hot out! Water was the drink of the day. I could see them laugh when I would catch something high that the normal first baseman cant and I know they are saying to one another “just throw it over there somewhere and he will catch it, he is such a big friggin monkey, he can catch anything”, then they point and laugh. I get it and like it because they know they can trust me to try for anything they can dish out.” 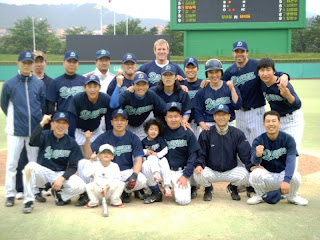 “…..I was told there was a game on a Sunday but got a call Saturday morning at 8 AM telling me we played that afternoon versus a team from Seoul……..I get to the field and it was a very busy. There were photographers and more people in the stands than a regular day. The other team was already hitting and taking infield and looked good. I found out later that some of them played pro and were a farm team of sorts for the Korean pro league. I was right about them probably being better than what we see here in Jeju and I was happy to see it. The stands had lots of kids in them and more semi-sober middle aged men then normal watching both teams get ready.”

“……I was super tired but ready to roll and see what we were up against. In the end I had a good day at the plate and had a good day in the field. I was 2-3 in the game versus some good pitching. It was a young kid with a great Asian wind up and a great off speed pitch. I saw more than one of our players twist themselves into the ground. They were hitting our pitching so it was no surprise we took a whooping. They were beating our pitcher around like a rented mule. They had a four hitter that was my size and was hitting the hell out of the ball. There was a light mood and I was smiling head to toe and admiring this other team. I was actually playing baseball on a paradise island versus a team from Seoul! I almost forgot I was in the game a few times and found myself watching and not knowing what the count was and how many outs there were.”
“…..Baseball wise, the fun part was the other team. They had some sweet fielding middle infielders and some great hitters. Speed wise Koreans are not normally fast and this was true of this team. They basically made their way around the bases with singles and the odd double but nonetheless made their way. I don’t think they stole a base the whole day but seeing their hitting was good enough for me.”
“……..The day was a good one for sure. I was amazed at a few things. I saw some great baseball finally. I had witnessed some real clown shows in the games we have played. The errors are relentless sometimes and make for long games. This day, I saw some great baseball and it made me think of what a great experience it was. I was seeing something that I never ever dreamt I would see. I can look at it and say I am privileged and lucky to see this as it’s truly something of a surreal event for me. The two teams smiling and playing a game we all love to play made me forget I was in Korea. Made me forget I didn’t know how to say “good play” or “good hit”. We didn’t win the game but the game of baseball brought me a little closer to my teammates and more importantly Koreans. I saw no differences between skin, language and any other thing you can think that was and is different on every single day I play.”

“…….The second game was a bit different in a few ways. First of all, I didn’t know there was a second game. I was finishing the second game up, packing my glove my hat and cleats when Robert (named after my father by me) comes to me and says “Seteben, you ok, play again? More game”. I thought &^%$ I am tired and I didn’t want to go through another beating like they put on my team. This game was different for a second thing; it was an All-Star game! They asked myself and players from all sorts of teams to play in this game. I thought well that would be cool as the skill level on our team would be higher and maybe we would give them a run-for-their-money. The third thing that was different and was very exciting for the Koreans was that it was under the lights. They don’t play under the lights in Jeju and there were guys who had never ever saw or played a game under the lights. So this was by all accounts, a big deal game. So I said yes. Hangover and all.”