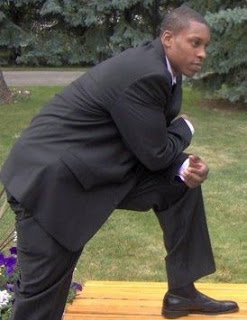 The Halifax Rainmen are lucky to have a Canadian talent like Jevohn Shepherd.  Based out of Toronto, Ontario, Shepherd played with one of the top NCAA Division 1 basketball programs at the University of Michigan which churned out such talents as Chris Webber, Jalen Rose, Jamal Crawford and Roy Tarpley.  Shepherd is one of many talents off of the Rainmen bench and has already showcased his offensive abilities this season when he scored 24 points against the league leaders, the Puerto Rico Capitanes in Puerto Rico.  Shepherd has also represented Canada at the World University Games where he played alongside fellow Rainmen teammate, Garry Gallimore.

I asked Shepherd about his thoughts on Halifax, his Canadian basketball role models and what fashion trend he was guilty of when he was younger.
__________

Romy (Haligonia.ca): This is your first season in the PBL, how does it feel to be one of the few players representing Canada on the Rainmen?

Jevohn Shepherd:  Definitely a blessing to be a part of a great program and having the opportunity to play
professionally as a Canadian because many are not as fortunate to be doing something they love at this stage in their lives.

Romy (Haligonia.ca): What have been your first impressions with the Halifax Rainmen club and the city of Halifax?

Jevohn Shepherd: I am really impressed with how professionally the team is run, definitely comparable to many of the premier university and professional clubs across the world,which is a testament to the work put in by owner Andre Levingston and Jad along with all the other supporting staff for their efforts. As for the city of Halifax the people are great and I love it, it was a little different at first because I’m use to a big city being from Toronto, but for the most part I’m really enjoying the Scotian hospitality.

Romy (Haligonia.ca): You played for the Michigan Wolverines from 2006-09, what was the Michigan experience like? And how fun was it to play in the NCAA tournament?

Jevohn Shepherd:  Playing at the University of Michigan was also a great experience, during this time I learned a whole lot on and off the court. Many memories and relationships were built over the years here, which I am extremely thankful for. The NCAA tournament was something I promised myself I would make before graduating, we came real close my first year (never will forget the feeling watching the selection show and hearing the last final pick and it wasn’t Michigan) but with hard work and perseverance in my last season, we did make it and went on to the second round. Again, I am just thankful to have had that experience as many players who dream about such never have the opportunity.

Romy (Haligonia.ca): Who were some Canadian players that you looked up to when you were a young baller?

Jevohn Shepherd:  Growing up, I looked up to many players because I was always the “young boy” in the gym working out with guys like Denham Brown, Jermaine Anderson (who played with the Rainmen a couple seasons ago), Patrick Tatham and Kaylan Anderson. Many of these guys have become some of my closest friends and continue to guide me with decisions I make. Even now I look up to the younger generation that I’ve been around, just watching them play, you’re still able to learn and add from their game and experiences. Big congrats to Tristan Thompson and Corey Joseph on their McDonalds All American team selection.

Romy (Haligonia.ca): Aside from playing with the Rainmen, have you played with or against any of the other guys on the team?

Jevohn Shepherd:  I’ve played with Garry Gallimore for Canada when we won the bronze medal at the World University Games in Bangkok, Thailand a couple years back.  I also played against Adris once and Deandre Thomas a couple times in university.

Romy (Haligonia.ca): Are there any nicknames for some of the other guys on the team that fans might not know about?

Jevohn Shepherd: Adris CLAIMS his nickname is “too hard too guard”, lol, but other than that we change nicknames for everyone everyday depending on how we are feeling or something you do.

Romy (Haligonia.ca): Flashback to you when you were kid. When you were let’s say, 10-12 years old, who was your favourite music artist at the time, your favourite basketball player/team and a fashion trend of that era that you were guilty of.

Jevohn Shepherd:  Favourite music artist would have to be Biggie Smalls and Jay-Z. My uncle listened to them 24/7 so I was brainwashed early…to be honest, I didn’t really have a favourite team. I hated watching basketball but I loved playing…fashion trends, I am guilty of a couple, tucked my pant legs into my socks but that’s all I’m going to share, I don’t even want to revisit the others myself, I’m embarrassed.
__________

A big thanks goes out to Jevohn for taking the time to chat. Be sure to check him out at the Halifax Rainmen home games and also keep up to date with Jevohn and the Rainmen at rainmenbasketball.ca