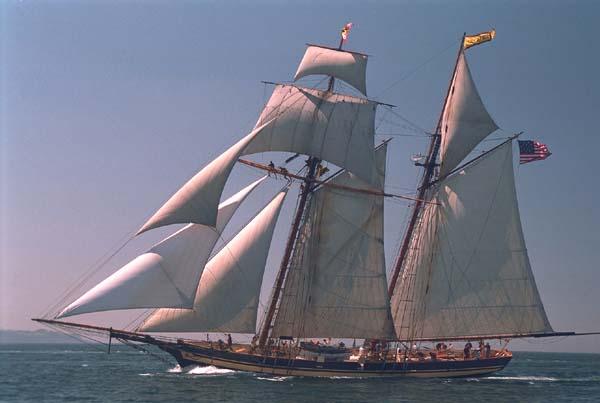 Part two of our dialogue with crew members of The Pride of Baltimore II.  If you missed part one, you can find it here.

Where would you like to sail to in the future?
Answered by Guest Crew (repeat offender) George Rockwood (75 yrs young)

All my life during my more foolish mental flights of fancy, I have imagined a voyage which would include a passage around Cape Horn, 50 degrees South Atlantic to 50 degrees South Pacific, in a square-rigged ship (or barque). This “ideal” (ideally, or, possibly insanely, difficult) voyage, of course, would have to be relatively unconstrained by schedules. It would begin in Europe or North America, in order to include a crossing of the equator, and proceed to the Falkland Islands, just because I would like to visit those South Atlantic Islands outposts. After a week or so there, the ship would depart for the ultimate trip around Cape Horn before arriving in Valparaiso, just as in bygone days. As a concession to the commercially unnecessary nature of this passage, as well to its foolishness, the Cape Horn rounding would be planned to the comparatively less ferocious summer months of January and February.

It may be that Valparaiso is no reasonable tourist destination; I have no idea. If the famed old port would prove a poor one for a ship load of modern folk, we would proceed along to New Zealand, then to Tasmania and, finally, to a termination of my personal idea of a great voyage in Australia.

EUROPA (Dutch barque sailing with passengers over oceans) probably would be the vessel of choice, she being, I think, the only one of the large number of today’s square-riggers who frequent Southern Ocean waters.

One always could join a short-term-charter group on board one of the rugged purpose built modern yachts available near the southern tips of Argentina and Chile, and just view Cape Horn quickly and much more easily from her decks. But how, possibly, could that compare with the experience of a real “wrong way’ rounding in a real ship not near so far removed from those of a century and more ago?

Tell us a bit about what you think about Halifax and your experience at the Tall Ships Festival?
Answered by Deckhand Sarah Herard:

Tall Ship festivals can be long days of work for crew aboard PRIDE OF BALTIMORE II. As thousands of visitors cross the deck during a weekend, we share the history and mission of POB II and in the mean time; always meet some really great, interesting people.

When there is time to step off the ship, my favorite thing to do at a tall ship festival is explore the town or city hosting the event. Locals give good advice if asked about what to check out and because of this I’ve been to some exceptional farmers markets, local coffee ships, museums and bars.

Of course, Tall Ship festivals are always a place to catch up with old friends and shipmates who sail in other vessels, as well as meet new people from all over the world. And as most anyone would agree, a port brimming with tall ships is a magnificent sight.

What do you think draws all these crowds to these magnificent ships?
Answered by Second Mate Mattie Oates:

I think the initial draw comes from the alleged romance and grandeur of “the seafaring life”. Humans recognize, at some level, that the sailing ship is one of the most majestic creations ever cobbled together and they want to draw inspiration from that.

When they arrive, however, they find it’s not so much “wind through your hair” as it is “salt spray in your face, down your trousers, and any other place it may reach”. It is a physically and mentally exhausting job with long hours and no weekends, and yet, they realize we are all still wearing genuine smiles. That’s because we love what we do, REAL “seafaring life” these days, and they go away, not disenchanted, but enriched.

Tall Ships 2009: A Conversation With The Pride Of Baltimore (Part 2)
https://haligonia.ca/tall-ships-2009-a-conversation-with-the-pride-of-baltimore-part-2-3295/