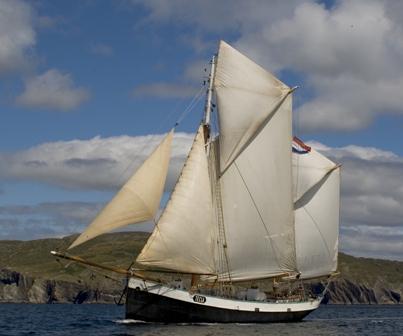 As the Tall Ships Atlantic Challenge fleet raced to Boston it was 120 foot, Gaff Ketch, Tecla of Holland that took the top slot.

Enroute to Boston Tecla, crew member Jet Sluik described the ships’ ‘colourful’ sail into port. “We saw a shark today and a lot of dolphins. We are in the gulf of Maine (and) it is nice to see so many boats around on a beautiful evening like this, with their colourful foresails. There is a little fog coming from land, (but) it promises to be another splendid sunset!”

Although frustrated by the lack of wind on approach, Tecla was successful in her bid to win the Charleston – Boston leg of the race. Sail Boston will host the ships from today (July 8th) to July 13th

For race updates and more stories under the sails – visit www.Tallshipsaces.org or www.tallshipsnovascotia.com.

The international Tall Ships Atlantic Challenge (TSAC) Race kicked off April 30th from Vigo, Spain. The race will cross the Atlantic for Hamilton, Bermuda, setting sail to the remainder of the Atlantic coast ports, first stopping in Charleston, South Carolina, currently the 4th leg is complete while the ships are docked in Boston, Mass., July 8-13, arriving in Halifax July 16 and departing for the final leg of the race July 20th. The race is scheduled to finish in Belfast Ireland from August 13-16th.