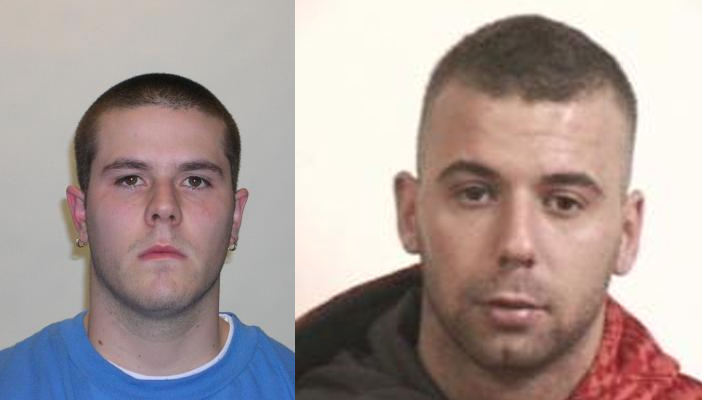 At approximately 10:40 P.M. members of the Halifax Regional Police Quick Response Unit attempted to stop a pickup truck on Macara St near Agricola St. There were 3 males in the vehicle.   he driver of the vehicle attempted to evade police and in doing so drove the pickup truck in to the front of an unmarked police vehicle. Numerous police units were on scene quickly. Two males were taken in to custody from the pickup truck and the third male was arrested after a short foot pursuit. Two of the males arrested in this incident are the two wanted men listed below from the media release dated September 11, 2013 (Brandon Mombourquette & Andrew Hudder) At this time all 3 males are in police custody and the investigation is continuing. The specific charges to be laid against these parties will be determined at a later date. No one was injured during the incident.

Police Request Public’s Assistance in Locating Two Wanted Men
Investigators with the HRP/RCMP Integrated General Investigation Section are asking for the public’s help in locating two wanted men believed to be travelling together.
On May 26, 2009, Halifax Regional Police conducted a traffic stop on Sheradon Place in Halifax and arrested 28-year-old Brandon Joseph Mombourquette after a loaded handgun was located in the vehicle. Mombourquette was charged with seven weapon-related offences in relation to this investigation. On March 1, 2013, Mombourquette failed to attend court for this matter and an Atlantic Region-wide warrant was issued for his arrest. He is described as a white man, 6’1”, 165 lbs., with brown hair and brown eyes.
On November 3, 2012, Halifax Regional Police responded to several shots fired in the area of Robie Street and McCulley Street. A 48-year-old taxi driver was driving north on Robie Street with a male passenger when his vehicle was shot at from another vehicle. On November 15, 2012, a Canada-wide arrest warrant was issued for 26-year-old Andrew Jason Hudder in relation to this investigation.  He has been charged with attempted murder (two counts), assault with a weapon (two counts) and nine weapons related offences. He is described as a white man, 6’2”, 165 lbs., with brown hair and brown eyes.
Hudder and Mombourquette are believed to be travelling together throughout Atlantic Canada at this time.  They are considered armed and dangerous and members of the public should not approach them or try to take matters into their own hands. Anyone with information on the whereabouts of these wanted men is asked to contact Halifax Regional Police at 490-5020 or their local police department. Anonymous tips can be sent to Crime Stoppers by calling toll-free 1-800-222-TIPS (8477), submitting a secure web tip at www.crimestoppers.ns.ca or texting a tip – Tip 202 + your message to 274637.