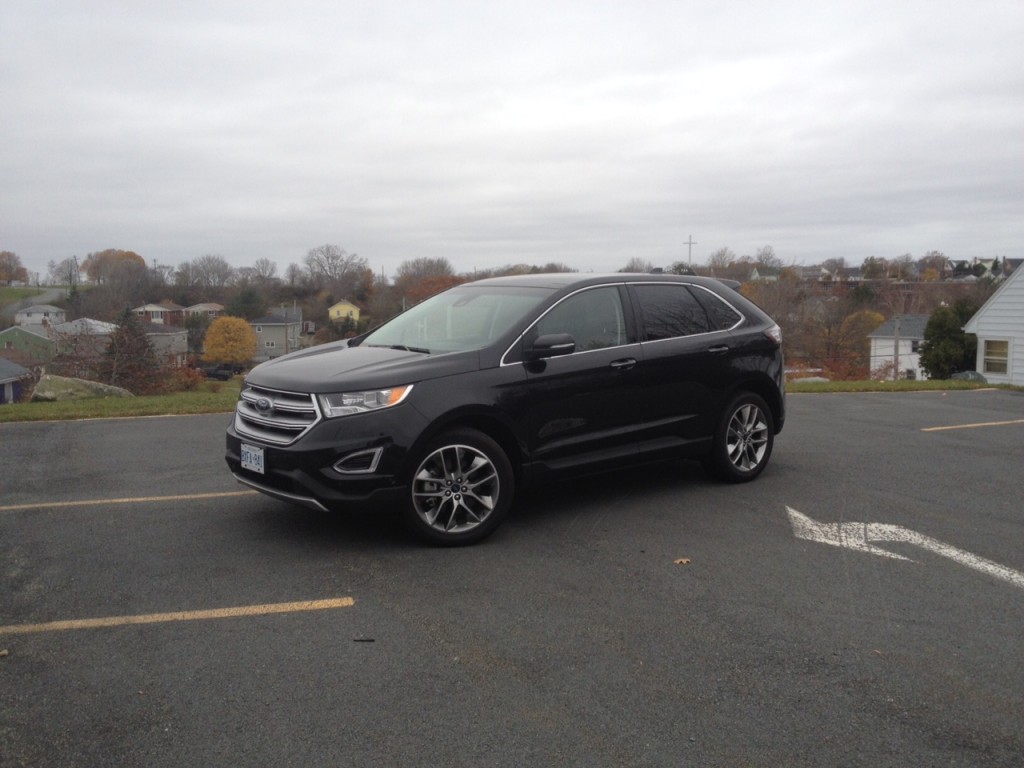 As little as twenty years ago, if you wanted a crossover from Ford, well you couldn’t really get one. That’s not because of poor product planning on Ford’s part it’s because crossovers didn’t exist back then, believe it or not.

In 2000 Ford started the idea with the original Escape, which also gave them room to make the Explorer bigger. Throughout the years it became apparent that the size and price gap between the too was getting a little too big. As it turns out, that was a good problem to have because it allowed them to develop the Edge, a crossover meant to showcase Ford’s new styling direction at the time (2006) all while offering a product to consumers who thought the Escape was too small and the Explorer was too big.

The end result was a sales success story. Now into its second generation, the ball game seems to have changed a little, however. Now your options for finding a crossover of this size with just two rows is starting to dwindle. That’s because the smaller crossovers like the Escape are also starting to get bigger and bigger.

So even though the Edge is a relatively new player to the car world, it’s even existence is already being called into question. Does the new Edge have what it takes to keep itself alive? 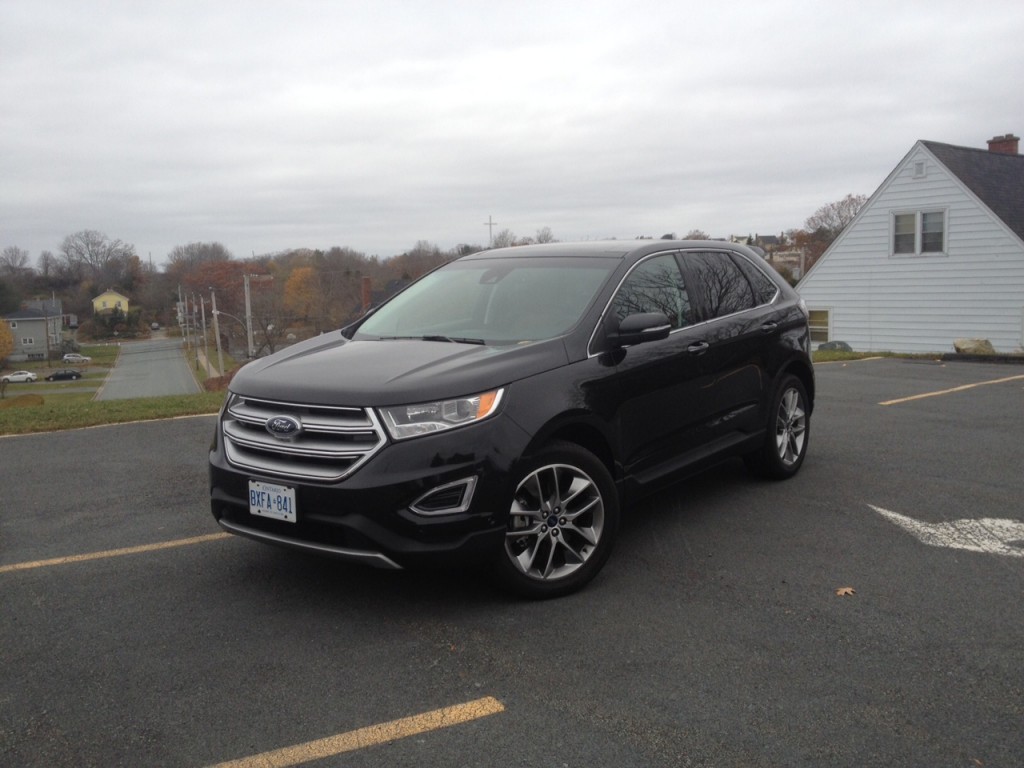 The second generation Edge is a much more handsome vehicle than what it was when it was first introduced. As mentioned, the Edge showcased Ford’s new styling direction and while it wasn’t unattractive by any means, it also didn’t really end up aging all that well. But this new generation incorporates Ford’s new global styling direction which should ensure a bit more longevity in its design. But a new front grille with reworked headlights, a more sculpted side profile and Ford Fusion-esque tail lights help the Edge through its styling evolution. Speaking of those tail lights, they are all LED, however one thing that I don’t understand is the turn signals. If you get a lower trim you get all red LED turn signals. But if you opt for the higher trim levels, you get LED amber turn signals. I’m not sure why Ford went through the bother of doing that, but I really wish they would just use amber turn signals across the line. You need only read my rant on why amber turn signals seem to be in decline to find out why. In addition to getting amber turn signals, the Titanium trim also nets HID headlights and 20-inch wheels for visual upgrades. 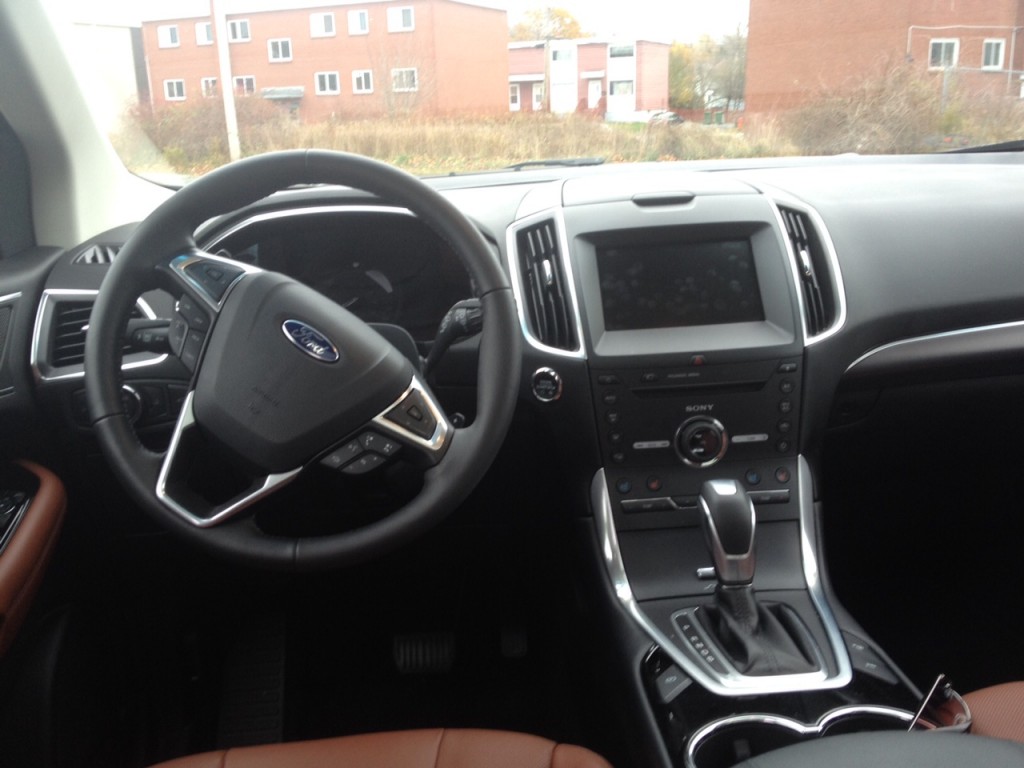 Inside you’ll find a nicely designed cabin but unfortunately the infotainment unit still sports Ford’s infamous MyFord Touch system. I won’t go into much detail on it since all you need to do is a simple Google search to find out why everyone hates them, but I will say that this particular version didn’t seem to be as irritating. I don’t know if it’s because I’ve just finally gotten used to it over the years or if Ford actually made a few tweaks in its final hurrah. If you are interested in buying an Edge, you would be well advised to wait for the 2016 model year because that’s when Ford will include the new version of MyFord Touch, Sync 3, which promises to be better in almost every way. 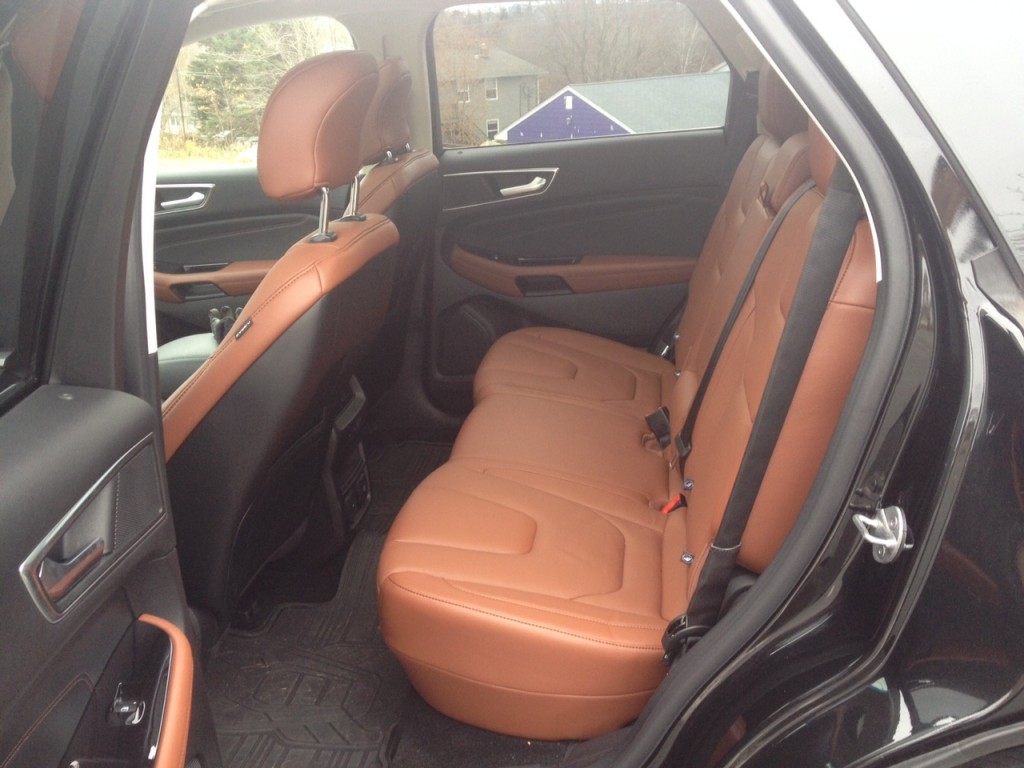 Ford is one of the few companies that listens to its customers feedback. As a result, the centre stack now has tangible buttons. Yes, that’s right, now more touching random spots on the dash hoping it will respond (which it rarely did), so kudos to Ford for giving us our buttons back. The only downside is that they are all on the small side so operating them with a gloved had could be tricky. 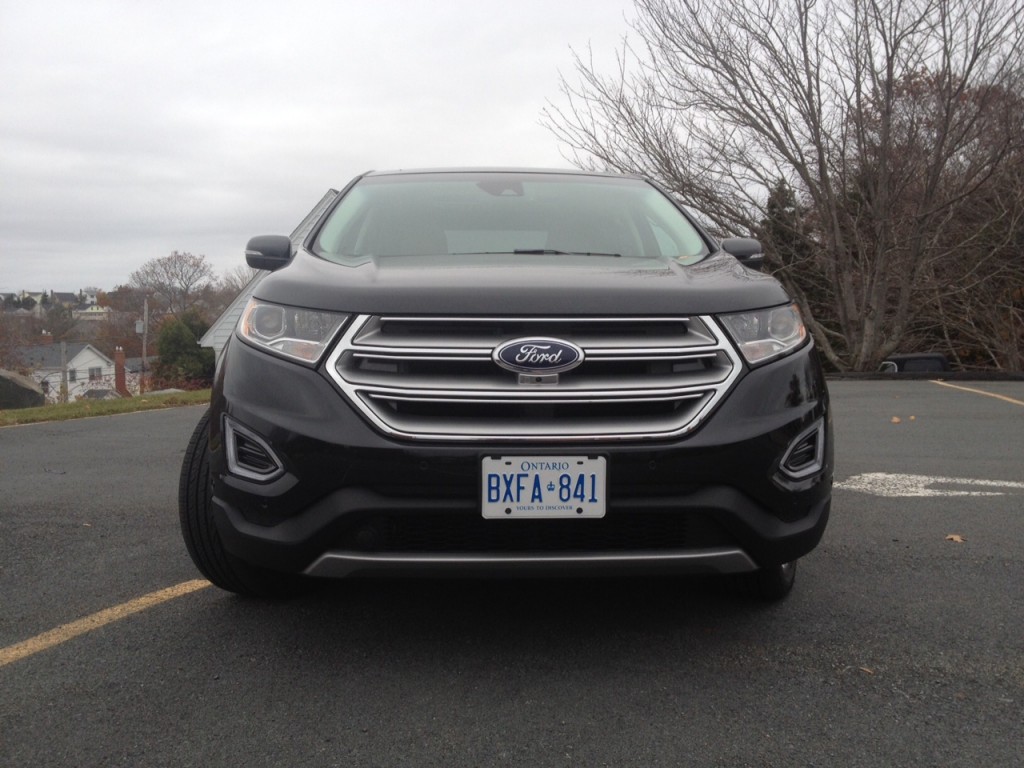 Seat comfort isn’t bad but it did take me a while to find the perfect driving position. This could partly be because the seats don’t offer enough thigh support, or it could be because the wheel seems to be forever tilted at an angle as if you’re diving a bus, but once you find the sweet spot, they do the trick – especially the cooled seats which come on rather quickly. Rear seat leg room is actually very good. After finally getting the driver’s seat right for me, I sat behind myself and still had a good 5-6 inches of leg and knee room. The rear seats are also a good place to be because they recline as well. You’ll also notice rear seat passengers get inflatable seat belts so when it comes to the Edge, you probably won’t actually want to call shotgun. The Edge itself is a wide vehicle which means the poor sap relegated to the middle seat likely won’t have too many issues. 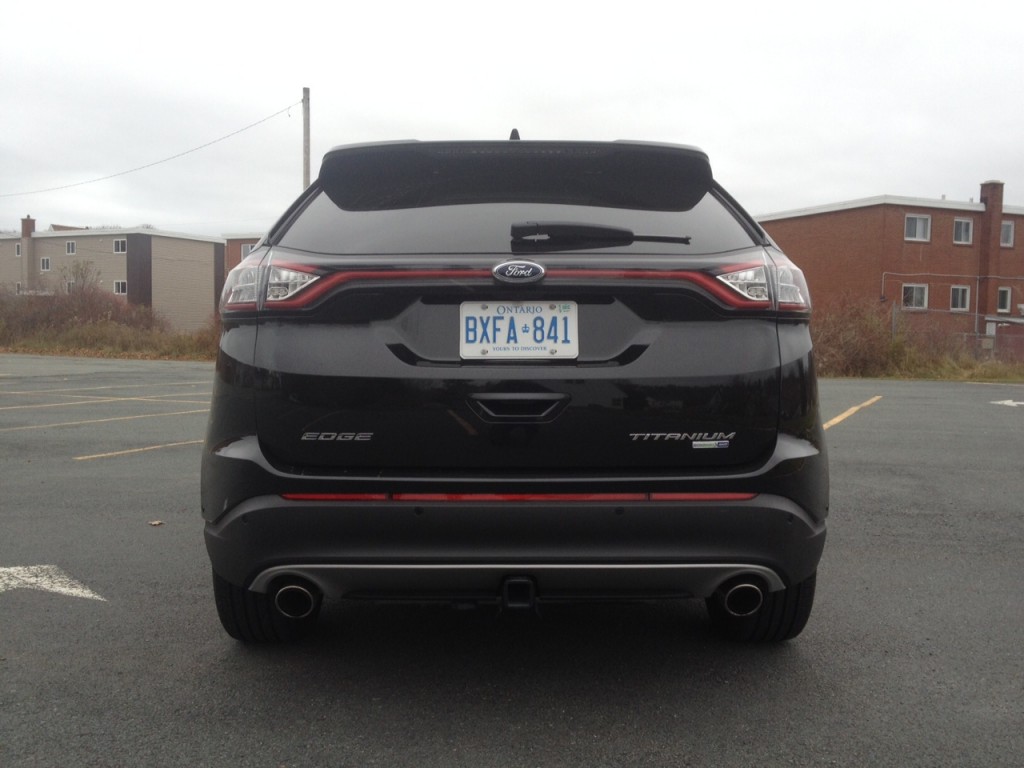 As big as compact crossovers have gotten over the years, they still can’t match the Edge’s cargo capacity. Thanks to the lack of a third row, the Edge can hold probably double the amount of a CR-V. There’s also no risk of straining your back or shoulder from opening the tailgate because it is of course fully automatic. You can also open it hands-free by making a kicking motion underneath the rear of the vehicle. It probably works four out of five times which isn’t bad, but I still think kicking underneath your own car looks a bit maniacal. 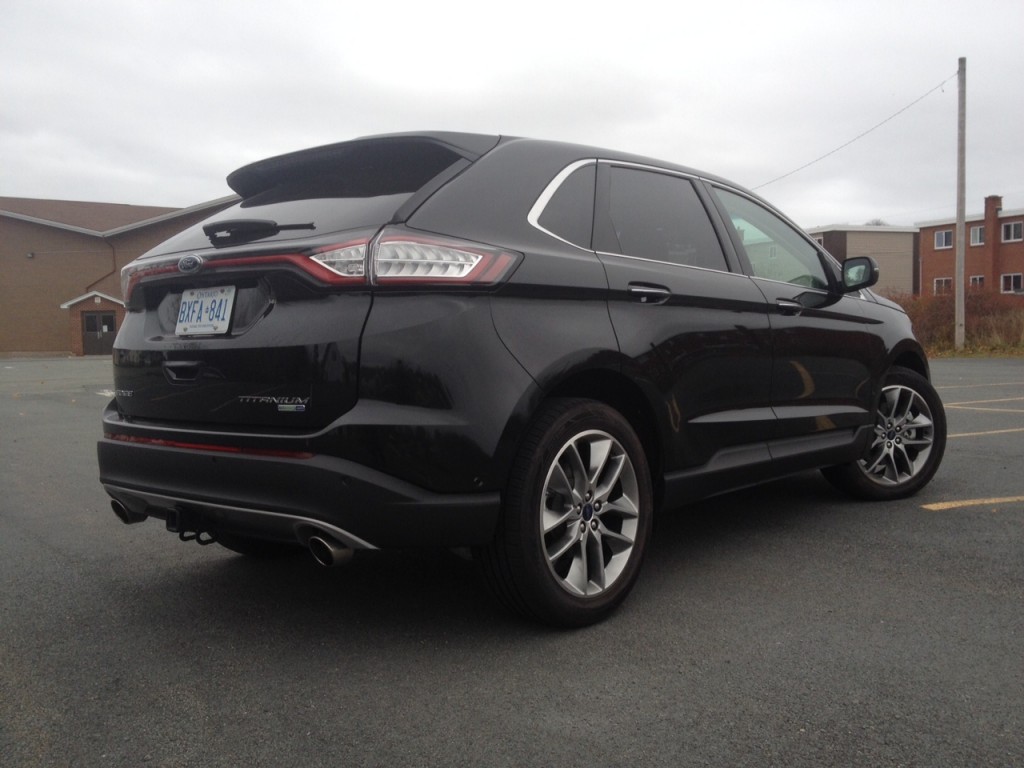 Ford offers three engine choices and my tester was fitted with the smallest – the 2.0 litre EcoBoost (that’s Ford speak for turbocharged) 4-cylinder engine which is good for 245 horsepower and 275 pound feet of torque. This is now the base engine, previously you had to pay extra for it. The end result as a vehicle with more than adequate power. I never felt myself really wanting for more, but if for some reason you do, Ford also offers a naturally aspirated V6 along with a turbocharged V6. But to be honest, Ford really does have a knack for getting a lot, and crucially, useful power out of smaller displacements. Engine noise to the cabin is slightly intrusive, but the engine itself really is a gem. With that being said, the 3.5 litre V6 found in the Nissan Murano is actually quicker despite being relegated to a CVT. But both engines have great low-end torque, I’d call it a draw. 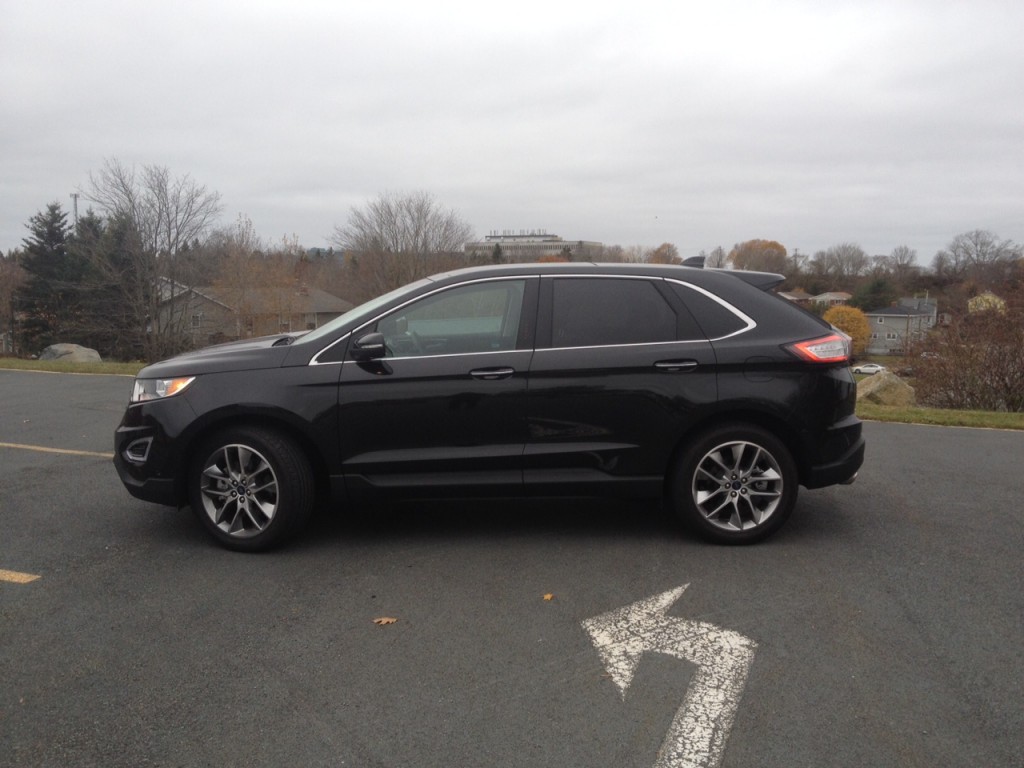 Out and about the Edge surprises with its handling abilities. That’s likely due to its aforementioned wide stance but my Titanium tester had optional wide 20-inch rims as well but you can also tell the suspension has been tuned for greater handling abilities. This didn’t necessarily impede on ride comfort though as both seemed to exist in tandem quite nicely. Sure there is some noticeable body roll at times, but we also have to remember that we’re not driving a BMW M car. As far as crossovers go, the handling is impressive. 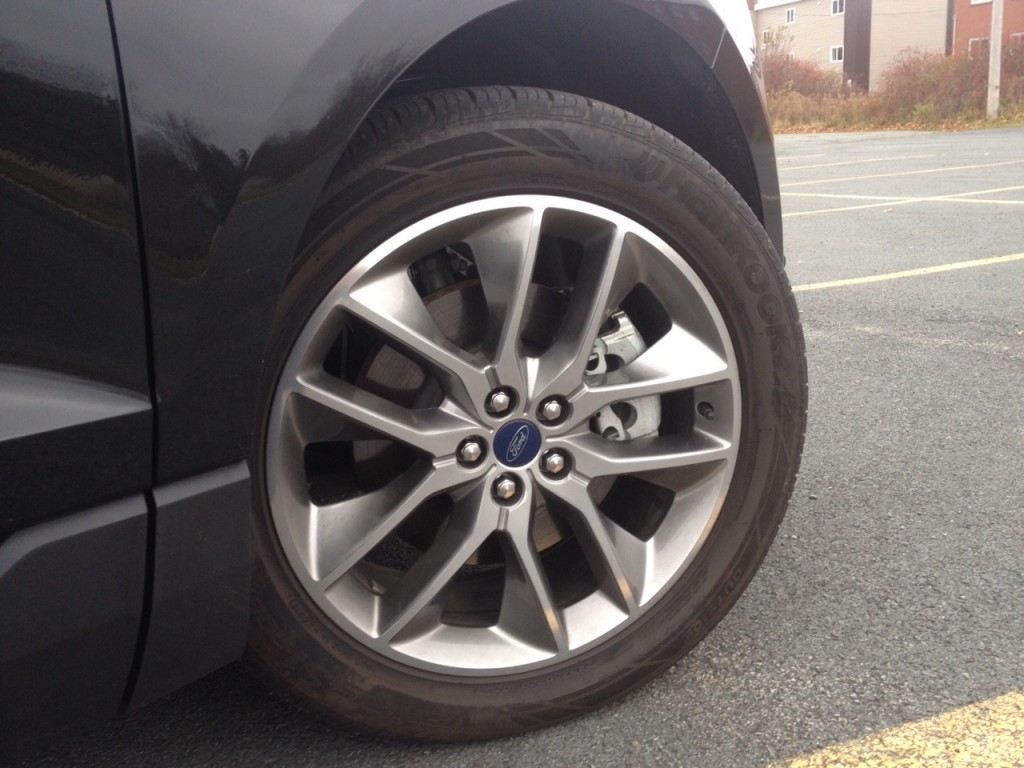 Now, the Edge with the 2.0 litre EcoBoost and AWD is rated at 11.8 L/100 kms city and 8.4 L/100 kms out on the highway. My real world result of mostly city driving came in at a rather disappointing 13.9 L/100 kms. I’m not sure where the Eco in EcoBoost comes in, but it certainly doesn’t appear to be with city driving. And the only aggressive driving I did was the test the capabilities of the engine and handling, otherwise it was driven quite normally. 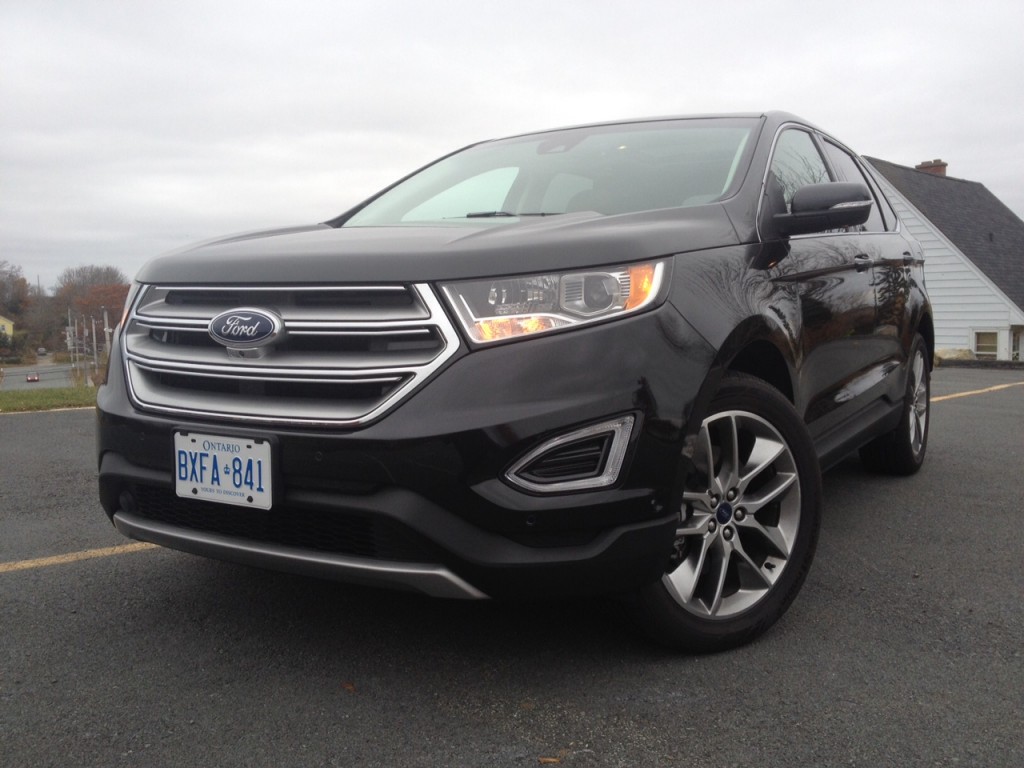 But despite that, the Edge does still make a business case for itself in terms of ride, quality, handling, cargo capacity and that engine (not counting the poor fuel economy score). I recently drove the Nissan Murano, which is probably the Edge’s closest competitor and at the time I remember really liking it and thinking it was probably best in class. Now I’m not so sure. The Murano probably has the edge (excuse the pun) in terms of interior fit and feel and low end torque, but the Edge has better handling and is perhaps a bit more pleasing to the eye. At the end of the day, these two are still proving that there is still very much  place for two-row mid-size crossovers.