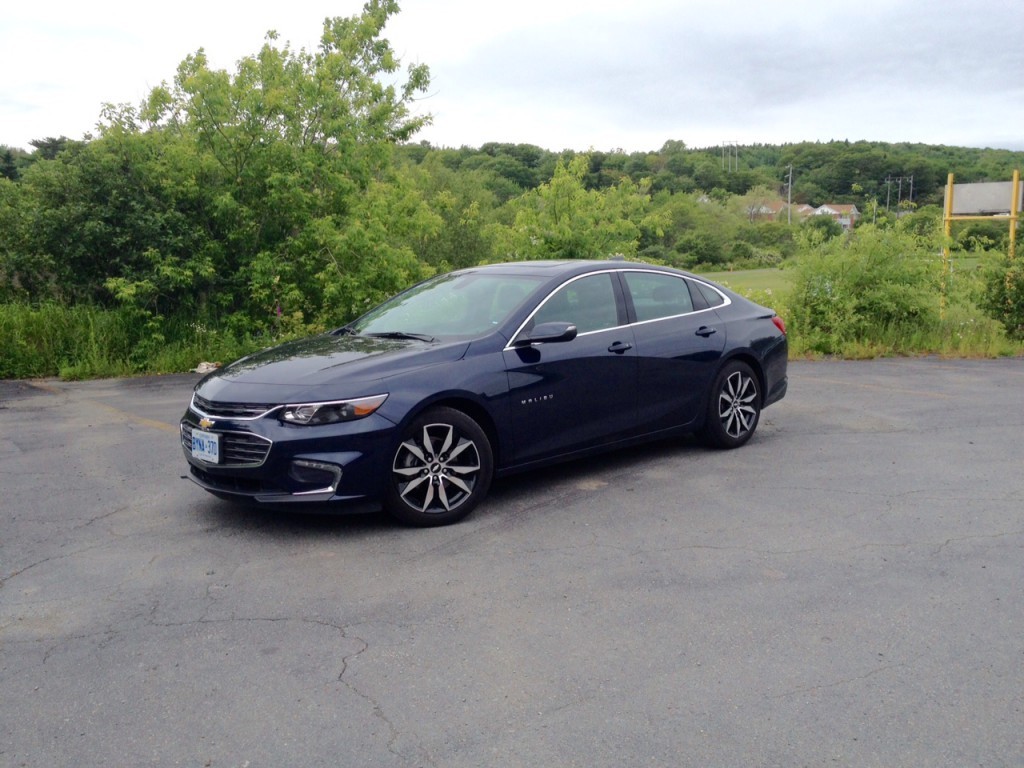 The teenage driver in your life probably considers this their most hated car. And GM is hoping you’ll buy one because of it.

Teenage drivers wouldn’t necessarily be contrary to this particular car because the Malibu nameplate hasn’t been cool since the 60’s. Nor would they be put off because it’s a family sedan as opposed to a 400 horsepower coupe. They’ll be put off by it because GM went out of their way to add technology that, ironically enough, most teenagers are going to hate.

In fact, GM has gone out of their way to add a lot to the 2016 Malibu in an effort to keep you out of Toyota and Honda dealerships when it comes time to replace the family ride.

I’ll get to why teenage drivers are going to loathe this car in a moment, but first, let’s take a look at all the other reasons why GM thinks you should consider this long-lasting nameplate. 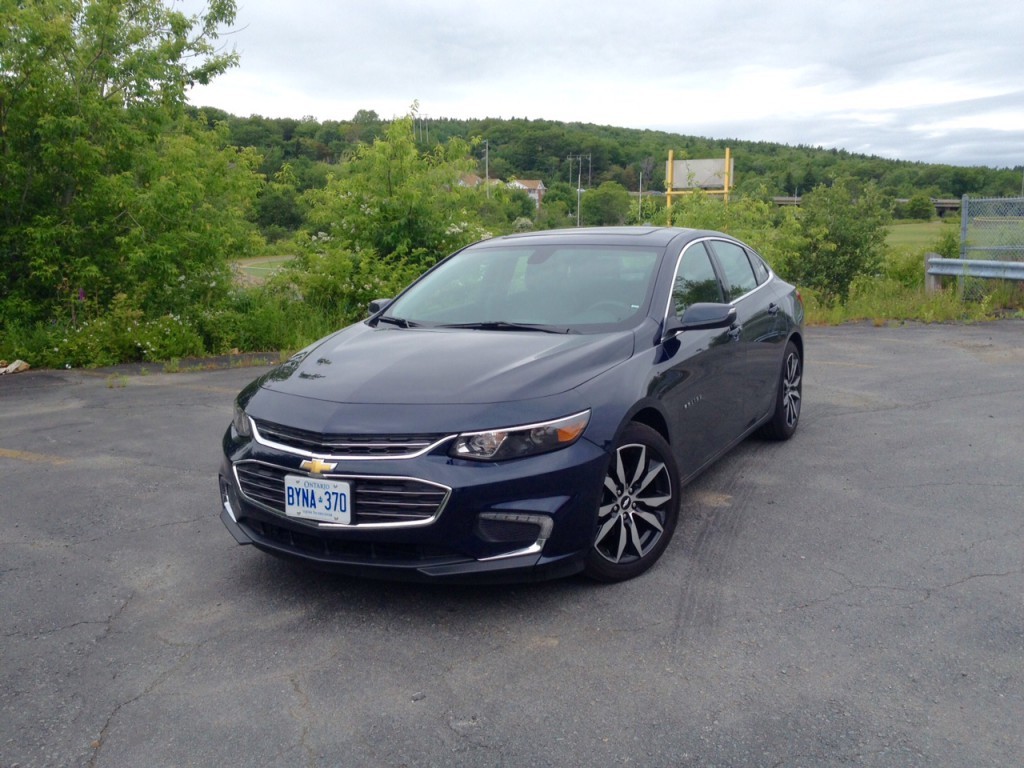 First, the styling. If GM’s television ads are to be believed, every day folks could and would mistake the new Malibu for an Audi if you remove the Chevy bowtie from the grille. As someone who knows better, I don’t know what they’re on about. I see very little Audi in this design.

But that’s not to say it isn’t an eye catcher. During my week with the new Malibu, I did notice it was turning heads more often than not – something rarely achieved with any modern Malibu.  It could be the front end, which was described as “aggressive” by a colleague – perhaps overly so. In my opinion, the front end design is a little too robotic, but to each their own. The eye-catching optional 18-inch wheels could also be a factor, or maybe it’s the rather sleek, coupe-like rear deck lid matched with attractive looking tail lights (though I’m disappointed that GM predictably opted out of using amber turn signals).

As far as Malibu designs go, this is a win and it is just the latest in the mid-size segment to come out with sleek four-door coupe-like styling. While I’m one to gravitate a bit more to conservatism, it’s safe to say GM can chalk the exterior styling up to a win. In terms of the interior, it’s a bit more debatable. The updated interior is a nice change from the long-in-the-tooth interior of the last Malibu. It’s a clean design that is sure to offend no one; however it’s not really a design that stands out either. This is either a good thing or a bad thing depending on your tastes.  The conservativeness of the design makes for easy to use logically laid out buttons, however I found the screen to be angled a little too far upwards making it difficult to read at times. GM also really needs to stop with putting the manual shift mode on top of the gearshift. They may be betting that most of you won’t use it anyway (and they’re right, you won’t) but for the few of us that still like to change gears manually; it really is a silly spot for it.

In addition, there are noticeable hard plastics here and there which take away from the overall feel of the interior. The good news is these cheap feeling plastics are not located in places that you would frequently be in contact with, which exception of the turn indicator stalk which feels particularly flimsy like it could snap off at any moment. Also, the fuel gauge never showed being full, despite filling the tank. It may just need some recalibration, but it’s still odd in a brand new car. 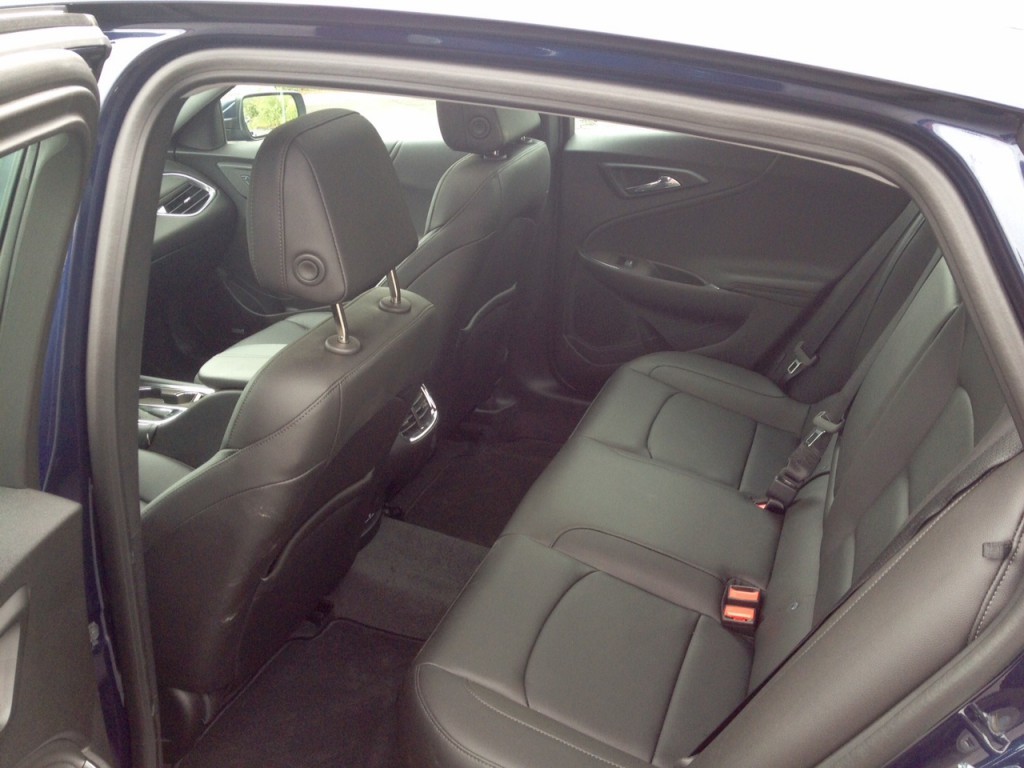 Where the Malibu’s interior really shines seat room, specifically in the back seat. It is quite spacious and the sloping roofline doesn’t impede much in terms of head room. There’s plenty of room up front too but I found the seats to be a tad uncomfortable and there is notably a lack of side bolstering.

Getting back to that tech I brought up before that will turn off your teen driver though. The Malibu can be programed to do certain things such limit how fast the car can go. Don’t want your kid going over 110 kph? The Malibu will deliver a warning each time your set speed was exceeded. Want to ensure your teen plus their passengers are buckled up? The radio won’t turn on unless everyone is wearing their seatbelts. It also can limit how far the volume can increase and it automatically enables safety measures such as Stability Control, Traction Control, Forward Collision Braking, and Front Pedestrian Braking.  The Malibu can even deliver a report card to you after each trip letting you know just how your teen was acting while behind the wheel. 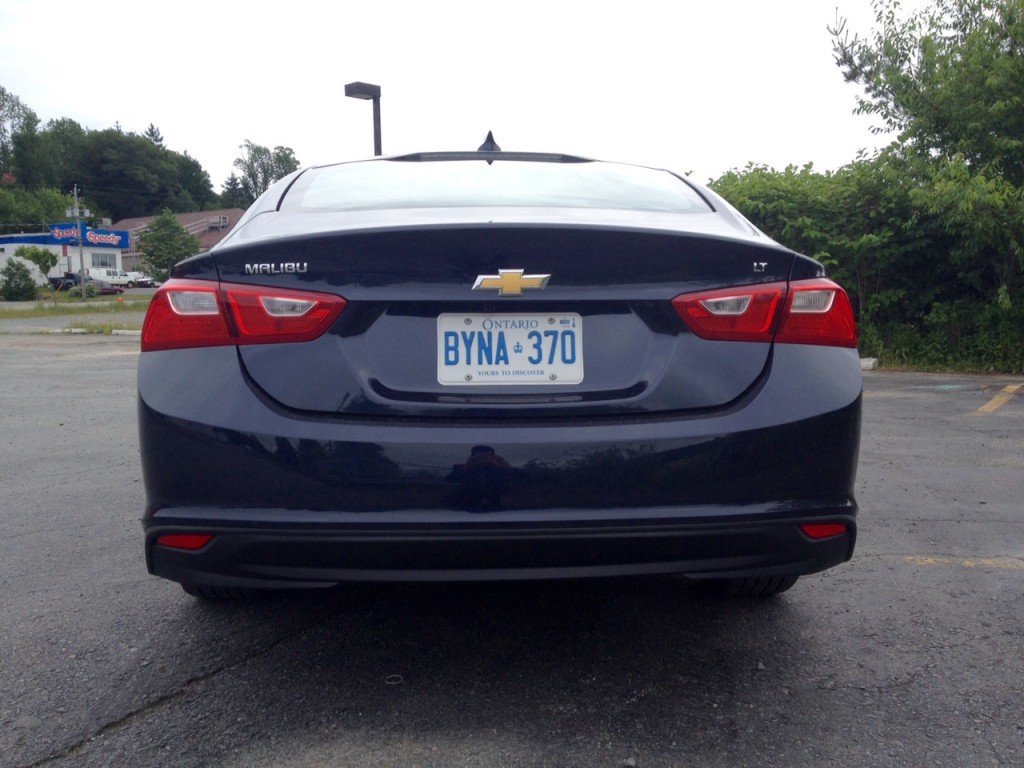 My tester came equipped with the 1.5 litre, as most leaving dealer lots will. Of course, it isn’t the most powerful engine offered in the segment and it feels it at times too, but there weren’t too many times when I found myself completely frustrated with any lack of power. Torque boost comes in at lower RPM’s to help get it off the line. The six-speed automatic isn’t noticeably calibrated for fuel efficiency, in fact there seemed to be times when it would hesitate to upshift. This is good to help keep the Malibu motivated though it must be said that engine noise becomes buzzy and intrusive at higher RPMs. 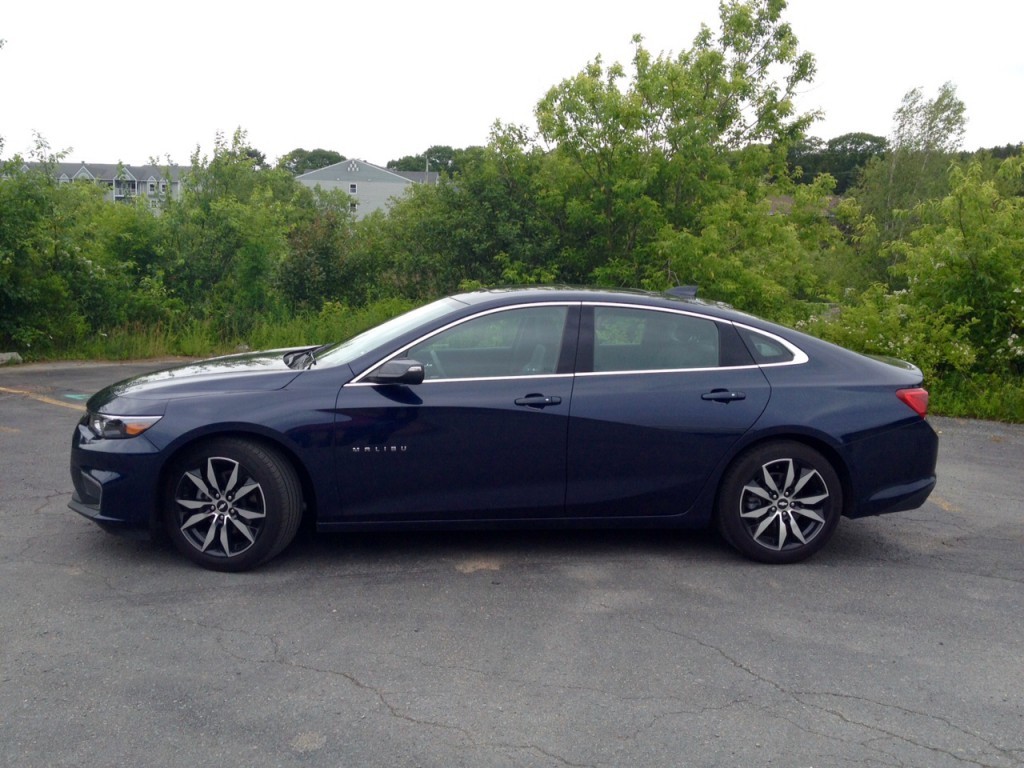 The Malibu’s ride is great on the highway providing smooth and quiet cruising. The suspension isn’t too stiff meaning it soaked up most bumps in the road with ease.

Chuck it into a corner and you must be surprised. The balance of the steering feedback is great and it keeps wobbliness to a minimum, maintaining a relatively planted feel. The new Malibu has grown in size a fair amount but it doesn’t necessarily feel like you’re flogging a big car into the bends. This, matched with some of the best brake pedal feel I’ve experienced in a long-time, earns the Malibu an ace it never really could lay claim to. The engineers did a good job with this one. 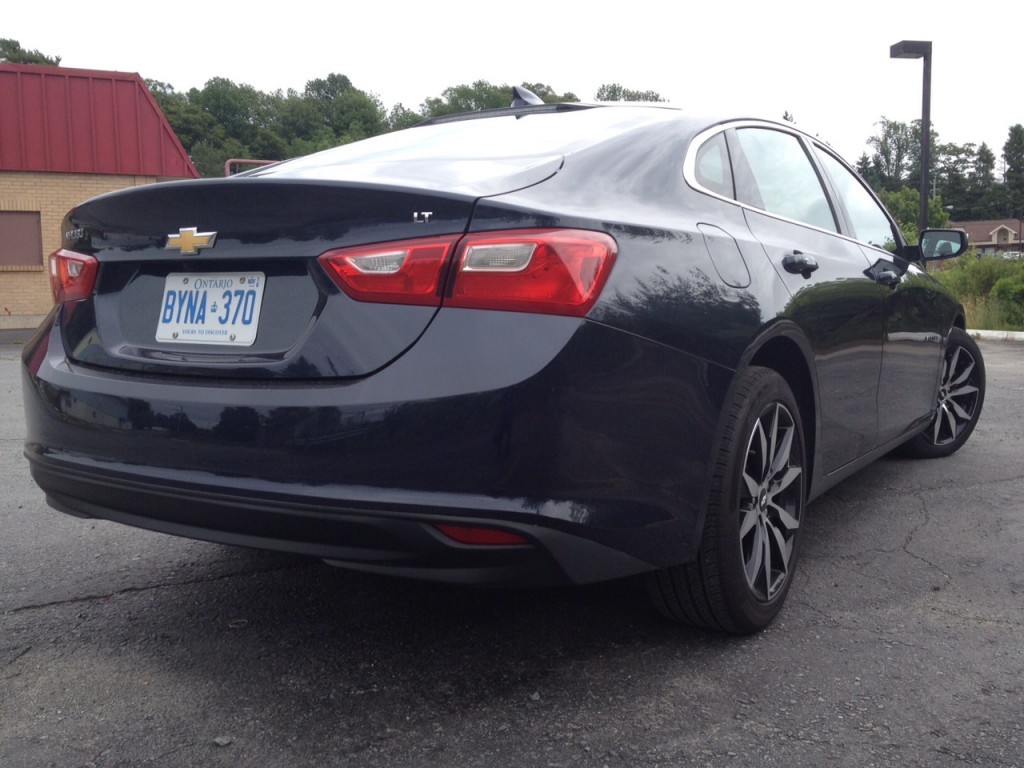 GM is hoping that a weight reduction and smaller engines will help boost the Malibu’s efficiency. Officially, those numbers clock in at 8.7 L/ 100 kms city and 6.3 L/100 kms highway. My mostly city driving delivered 9.1 L/ 100 kms. Not bad for a mid-size, but I was still expecting a bit better. 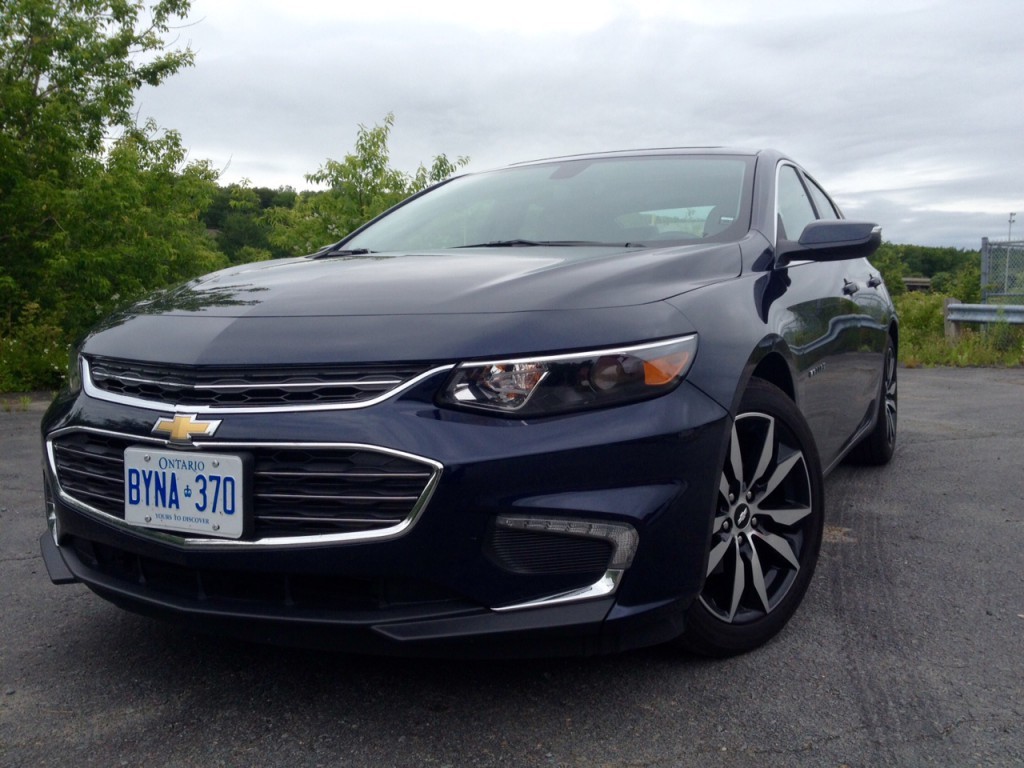 In a way, it’s a bit of a shame that most teenagers will end up hating the new Malibu because it’s the only new ‘Bu in recent memory that likely won’t make your spawn feel embarrassed to be seen in. The improved looks and overall drive of the Malibu are sure to be appealing on some level.  But if you are a helicopter parent, or you just plain don’t trust your kids (in which case, a larger discussion may be in order to be honest), then this is the mid-size sedan for you to take a strong look at. The fact that it surprises in both the ride and handling department is just an added reason to take a look. There are better handling cars with nicer interiors, but the new Malibu makes the strongest case for itself than it has for a long time.