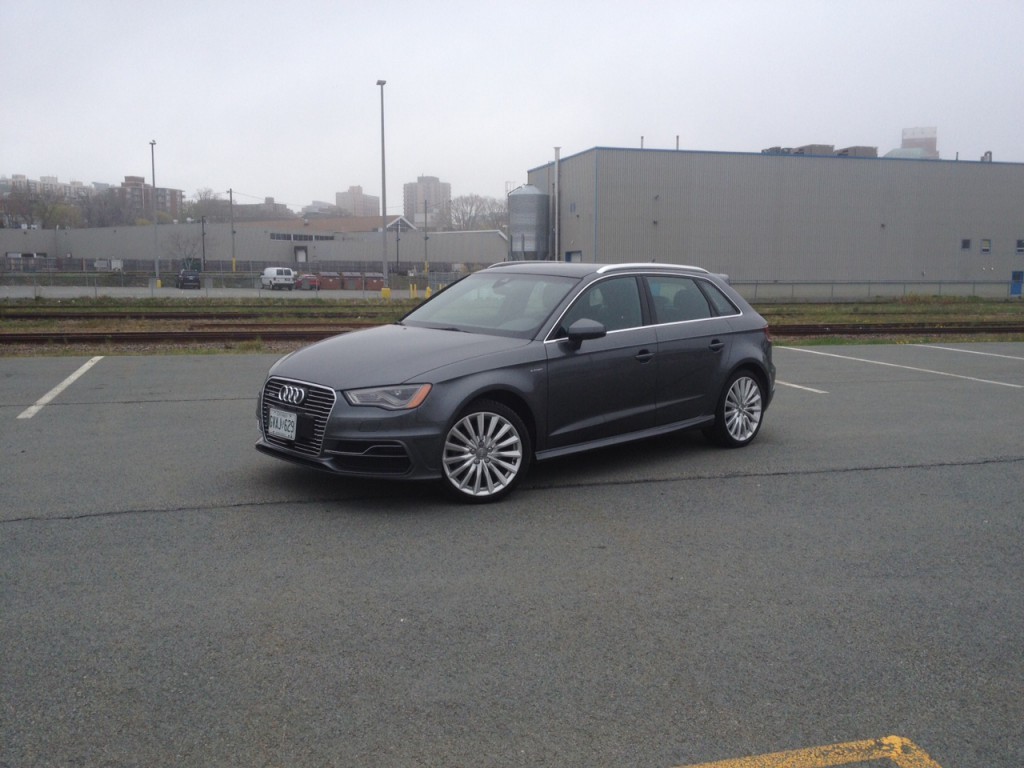 Car names are an interesting thing. I mean, just think of how difficult it is to name a human being. The name needs to be perfect, ideally liked by both parents and is well suited to a personality that you still haven’t gotten to know yet.

That’s why picking a name for a car can often be scrutinized, and for good reason.

Sometimes, however, a name can have unintentional meanings. Audi is no stranger to this sort of thing as they unintentionally used the term ‘green police’ in an old super bowl ad.

And now here we have the A3 E-tron; Audi’s foray into the plug-in hybrid market. While ‘E-tron’ sounds cool enough to be the name of the hero android in a sci-fi movie, as it turns out, it isn’t so cool as it relates to French slag. E-tron, in French slang, is a derogatory word for feces.

No matter, Audi is probably willing to bet that not a lot of people will notice that, especially considering the level of efficiency it promises. And indeed, out of the gate I will say I am impressed.

But is it good enough to wear the Audi badge; a brand that has worked very hard to be mentioned amongst the likes of rivals Mercedes-Benz and BMW. I drove one for a week to find out. 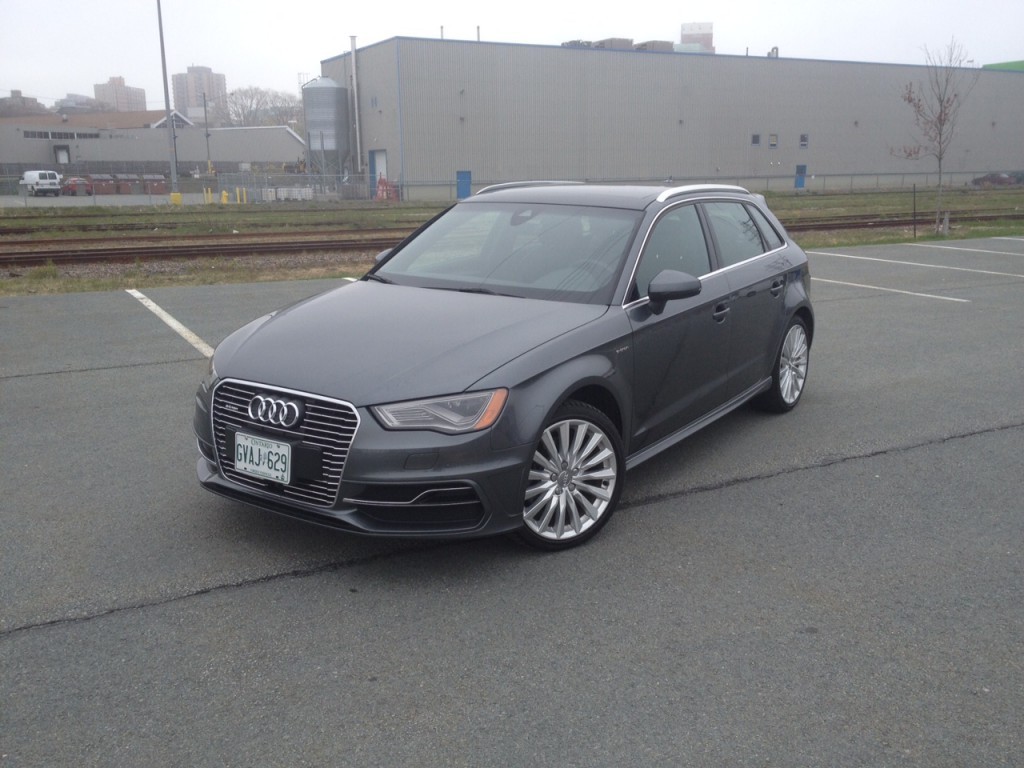 When Audi redesigned the A3, it introduced a sedan version all while taking away the hatchback for the North American market. Us hatchback lovers remained unimpressed, but Audi did throw us a bone by bringing the E-tron version exclusively in hatchback form. And as far as hatches go, it looks great. It’s classy and inoffensive and tows the Audi corporate styling line to a tee. I wish we had more wheel options to choose from, and I’m not big on the chrome roof rails, but otherwise I doubt many will find any qualms with the styling.

If it weren’t for E-tron badging, you likely would have no idea it was a plug-in hybrid. The port for the plug in is cleverly hidden behind the Audi badge at the front of the car, even if, when releasing the latch to get to the charge port, it feels a bit flimsy. However, it is a good spot for it not only because it is quite discreet, but also great for pulling into charge stations without having to stretch the cord. 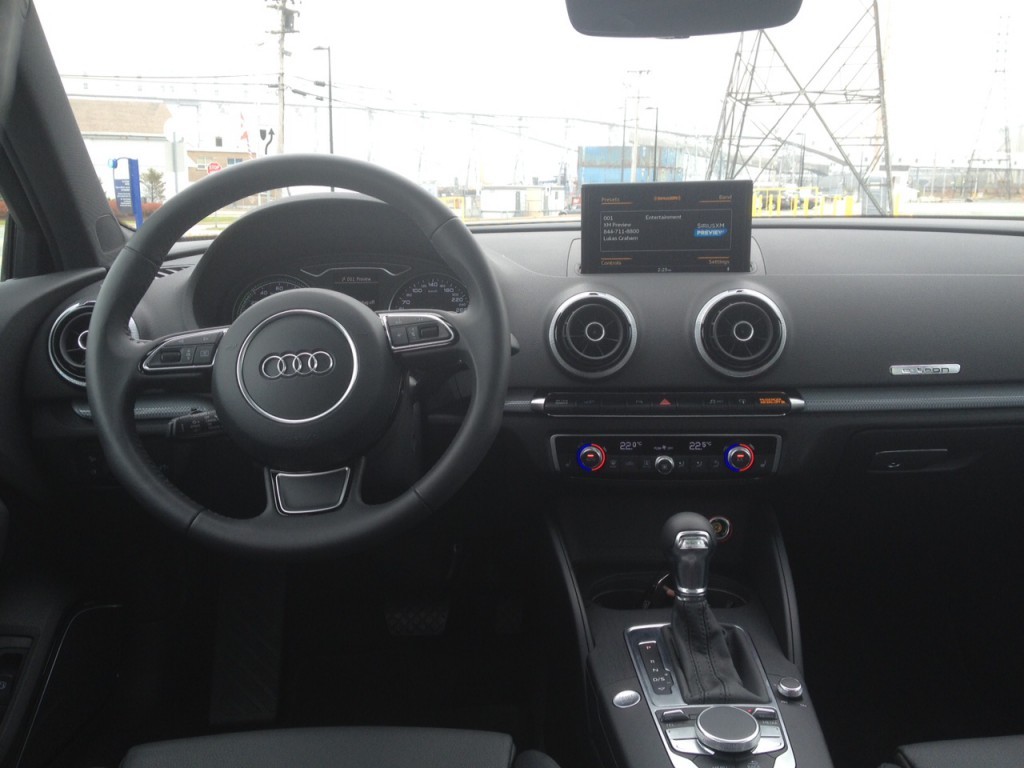 Inside is classy as well, though some may find the design a bit drab at first. It isn’t until you hit the push start button when the infotainment screen rises out from the dash providing a bit of light. Being an Audi interior though, even though it isn’t as premium feeling as its more expensive brothers, it still will not disappoint most.

What may be a bit of a disappointment though is interior space. There really isn’t much of it. While the A3 is based on the Golf, interior room is noticeably less. This includes head and knee room in the back as well as the cargo area. 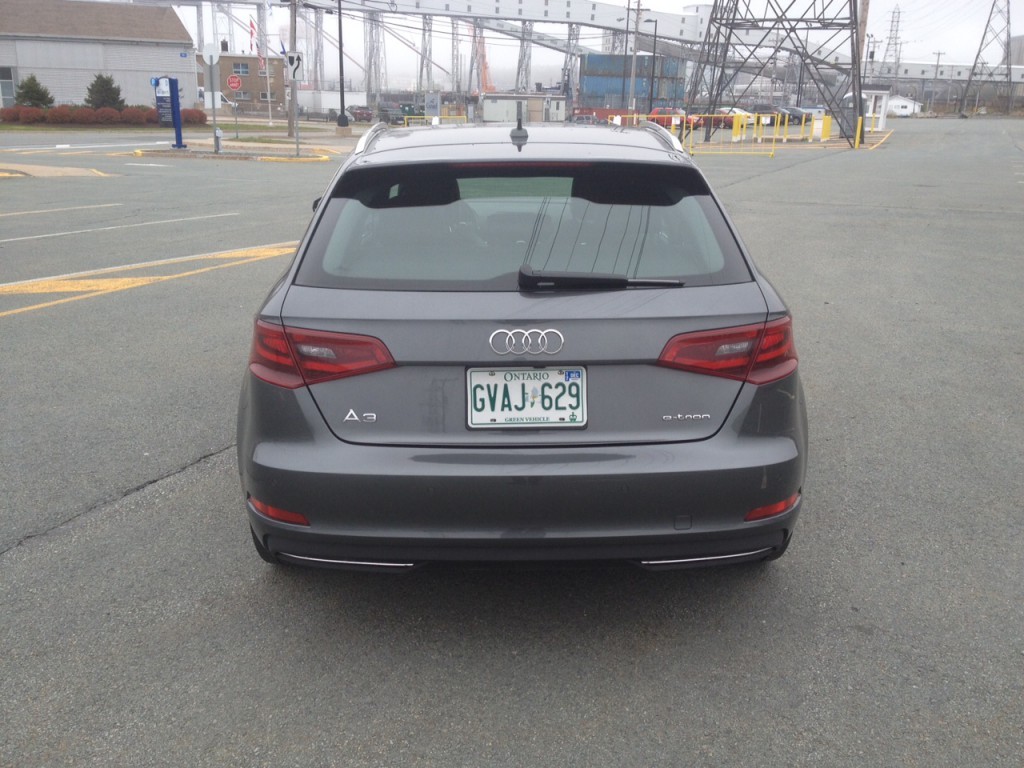 Left up the bonnet and you’ll find a 1.4 litre turbocharged 4-cylinder which produces 150 horsepower and 184 pound feet of torque. The battery is a 8.8 kWh Li-Ion which helps bring total power to 204 horses and 258 pound feet of torque, all mated to Volkswagen’s famous six-speed DSG automatic.

The end result is a rather heavy car that is still able to dart off the line and keep power up to the mid-range. Of course, when you do this, you drain the battery a lot quicker, but it feels relatively zippy around town and does well when merging onto the highway 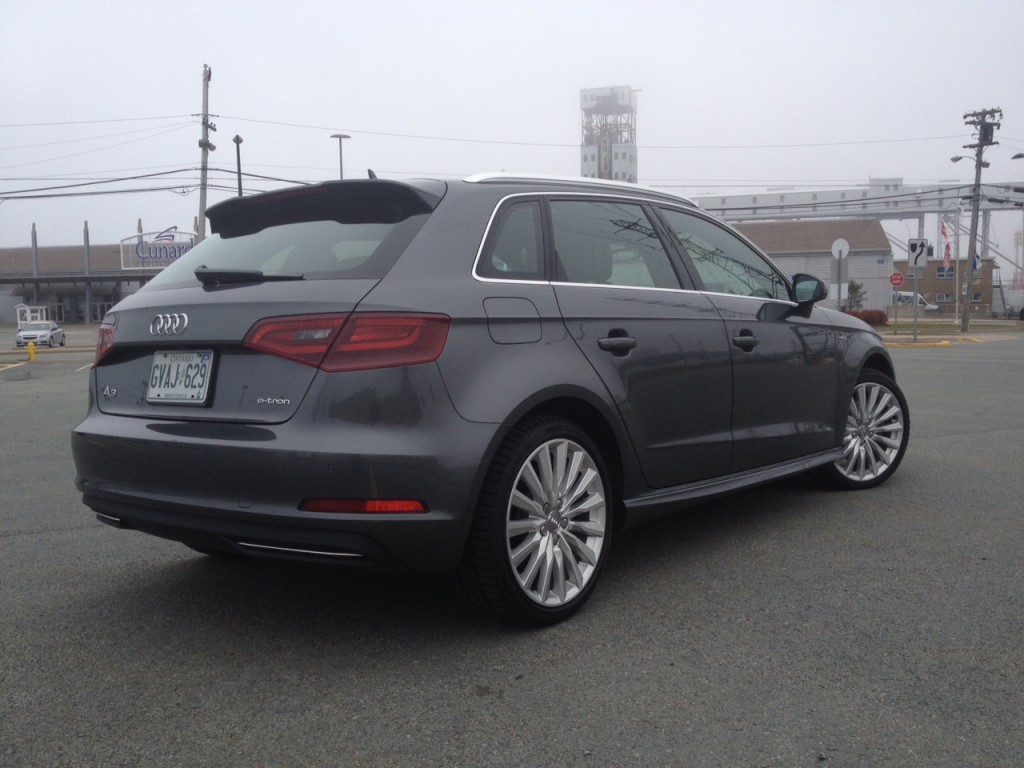 As far as hybrids go, this is one of the most dynamic I’ve driven in a long time. Keep in mind though, most hybrids can’t lay claim to superb handling abilities so this praise is relative. But, as mentioned, power off the line is good and the transition between gas and battery power isn’t noticeable in the slightest.

As is the case with the Chevy Volt, the E-tron can charge up the battery pack when it’s depleted simply by driving the car. While this helps is a neat idea in theory, I found in practice that it used up a tremendous amount of gas which sort of defeats the purpose of buying such a vehicle in the first place. If you were going to buy an E-tron, I would plan ahead to just have the battery charged from an outlet and use the generator only on rare occasions. 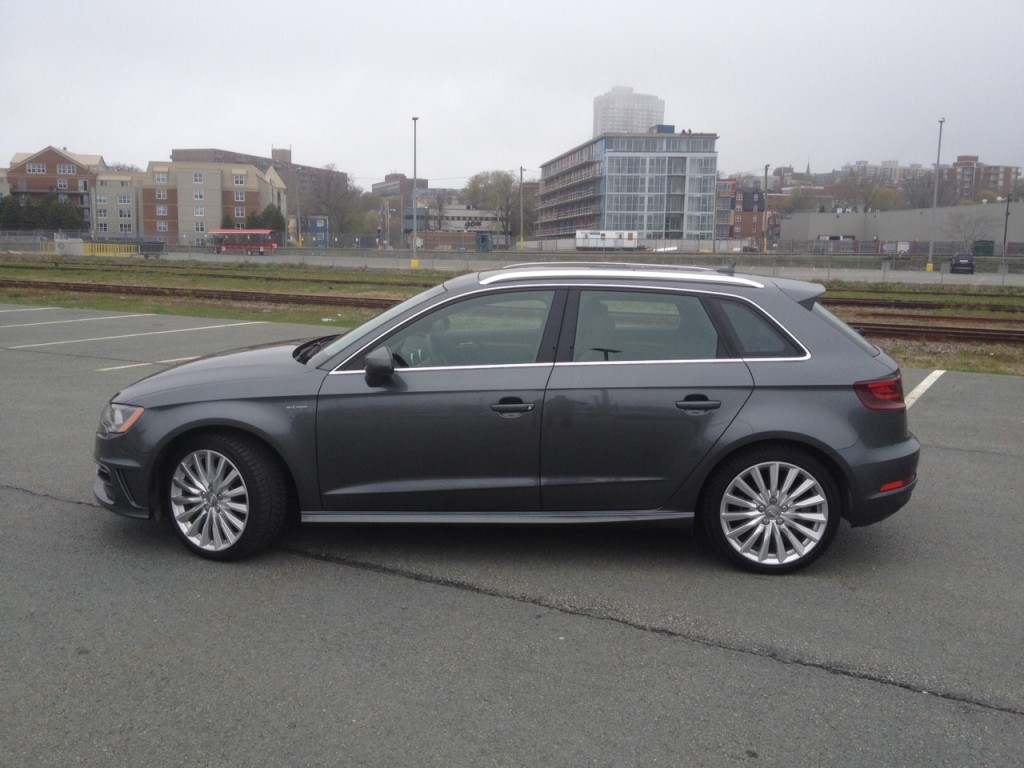 When the battery is fully charged you can get about 26 kms of juice (depending how your drive it of course), which for most would mean a gas-free trip to their destination, but likely not for the way back.

But while the E-tron is set up in a similar manner to a Volt, they are in completely different leagues when it comes to refinement and this is coming from someone who is generally impressed by the Volt. The technology feels more seamless in the E-tron, almost like a grown up version of the Volt.

As far as Audis go, however, it misses the mark. The big reason why has to do with the battery which adds weight. And you can feel it. Tossing the E-tron into a corner, again, is decent as far as hybrids go, but Audis aren’t meant to feel so wobbly and nose heavy in the bends. 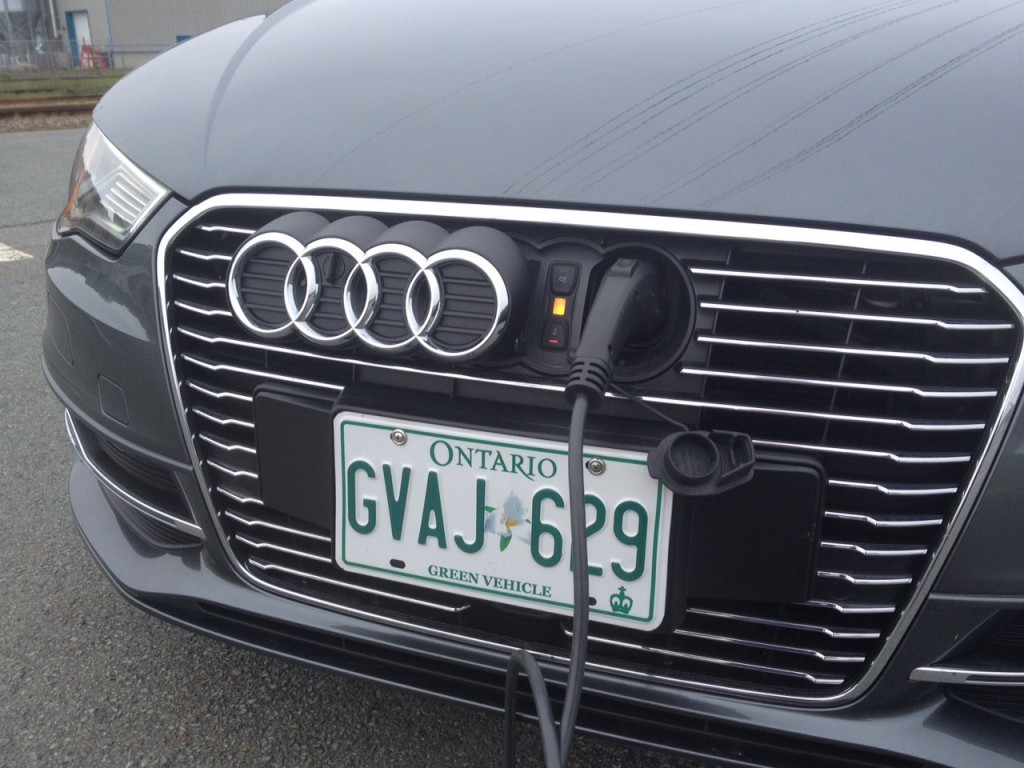 Officially, the E-tron gets a 6.4 L/100 kms city rating and a 5.7 L/100 kms highway rating. In the real world I was able to handily beat those ratings with 5.3 L/100 kms in combined driving. I also frequently switched through the modes as well as drove it a little hard at times to measure its performance credentials. Bottom line is, it’s likely you will consistently beat the official ratings, which is good if fuel efficiency is your number one concern. 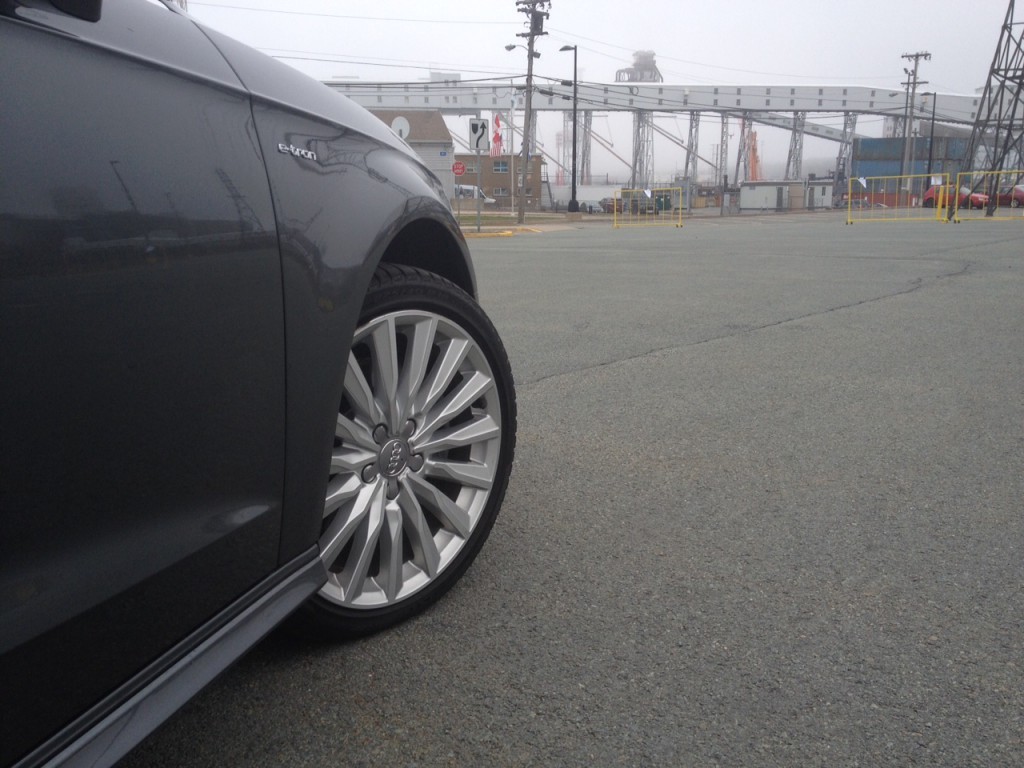 The A3 E-tron is a bit like sea water shrimp; delicious, satisfying and obviously better than cold water shrimp (aka other hybrids). But it’s no prawn just regular Audis are. Bottom line is, if efficiency matters to you, you likely won’t be disappointed with the E-tron, despite its unfortunate name. But if you’re looking for typical German balance and handling to go along with it, you may find yourself a bit disappointed from time to time. However, it is encouraging to see the Germans play more of a significant role in terms of efficiency. Typically the market has been left to the Japanese and even the American brands, but as far as plug-in hybrids go, the Germans once again show they excel in terms of innovation. 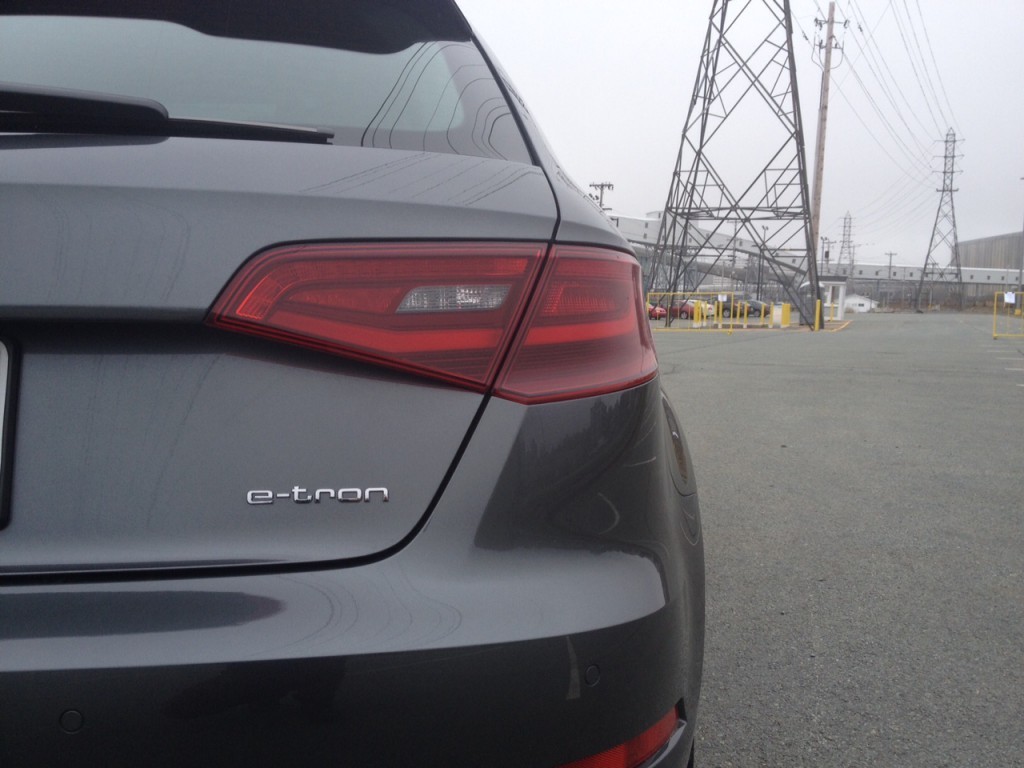