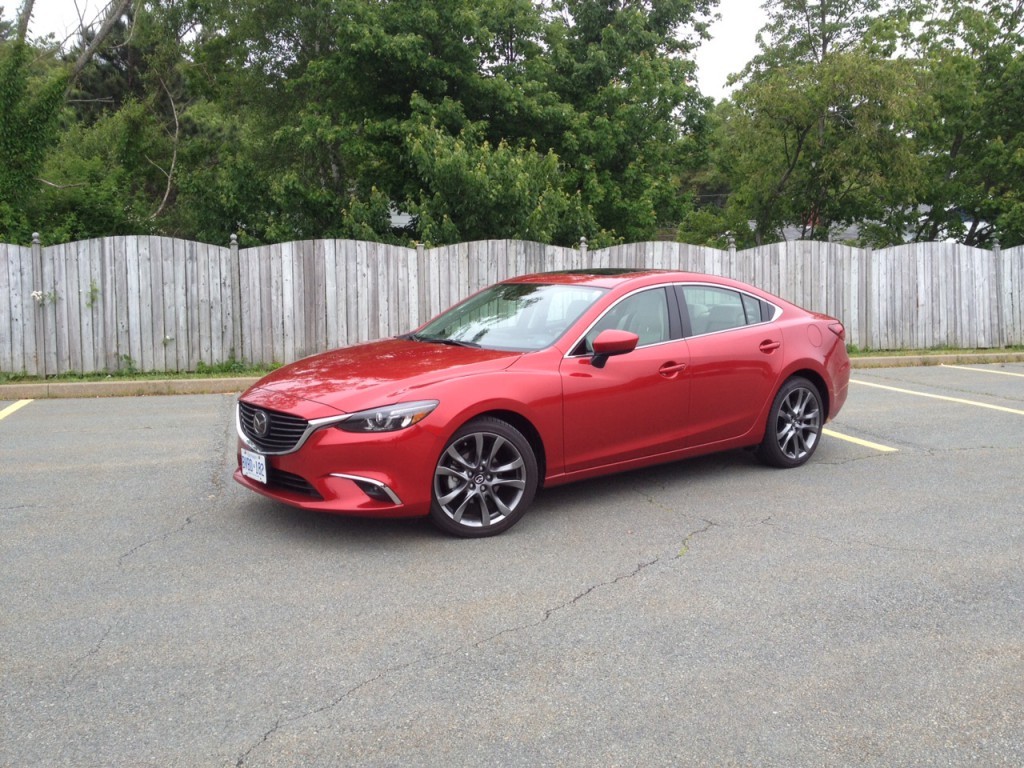 The Mazda6 is a fantastic car, but you won’t buy it.

It has consistently won praise from those of us who rightly or wrongly claim to be experts on cars. More often than not, if you find a recent Mazda6 review, the author will be gushing on and on about it. But you still won’t buy it.

It has consistently won several awards including Canadian Car of the Year in 2014. But you won’t buy it.

Why won’t you buy it then? Well, as someone who would, it’s difficult to theorize. The only thing I can come up with is that the auto industry is one of the few industries today that is completely driven by people who don’t care about driving. Those of us who care about driving and cars in general, ironically, have very little effect on the market because we are in the minority.

Most people want something that gets them from point A to point B with little fuss while using little gas. In other words, the majority of people’s tastes are boring when it comes to cars.

Now, that’s not to say that boring cars are bad. Take the Corolla. I recommend it to most people are ask my advice. They then say “so it would be the one you would buy then”?

“F**k no!” I always reply. Then I watch them try to decipher my seemingly non-sensical reasoning. I then explain that the Corolla is a great car for someone like them, but not for those of us who care about driving.

And all you have to do is look at the sales numbers of mid-size sedans – a segment that is decreasing overall, to be fair – to see that cars that are favourites of us so call experts don’t sell.

The Toyota Camry sold close to 17,000 units last year in Canada. The much beloved among automotive journalists Mazda6 sold just over 2,700. It kind of makes us wonder why we bother at all.

So, I can go on with this already predictably favourable review, but in the end it likely won’t make any difference. You still won’t buy it. But at least take it into consideration, because Mazda6 has made some improvements that might tickle your fancy. 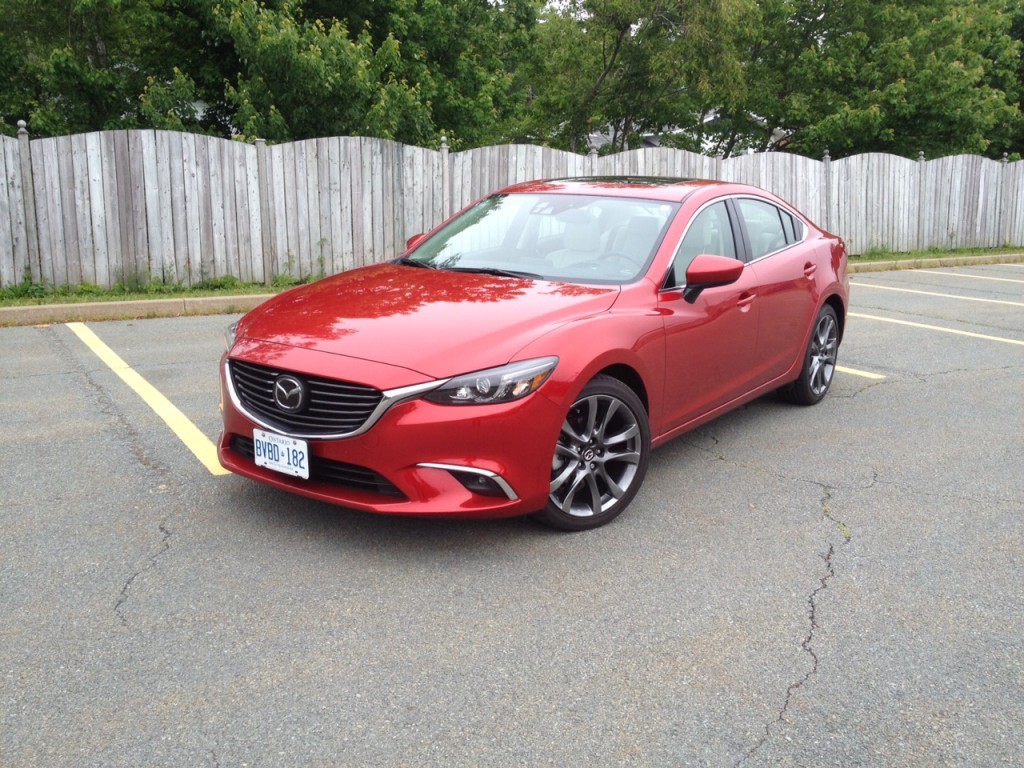 A lot of those improvements come in the form of exterior styling tweaks such as re-worked headlights, and enhanced grille and new wheel options for the GT trim. Few people will be able to criticize the 6’s lines, though I will admit there’s something just a bit off with the rear end treatment.

Still, the 6 does get a lot of stares, especially when painted red. One elderly man, who may or may not have been all there, asked “when did Ferrari start making four door cars?”

While supercar-like looks is a fairly big stretch, there’s no doubting the 6’s beauty, however Mazda designers should be weary of the sudden swoopy four-door coupe craze currently infiltrating the likes of competitors such as the Chevrolet Malibu, Ford Fusion and Chrysler 200 (though the latter is going to be discontinued). 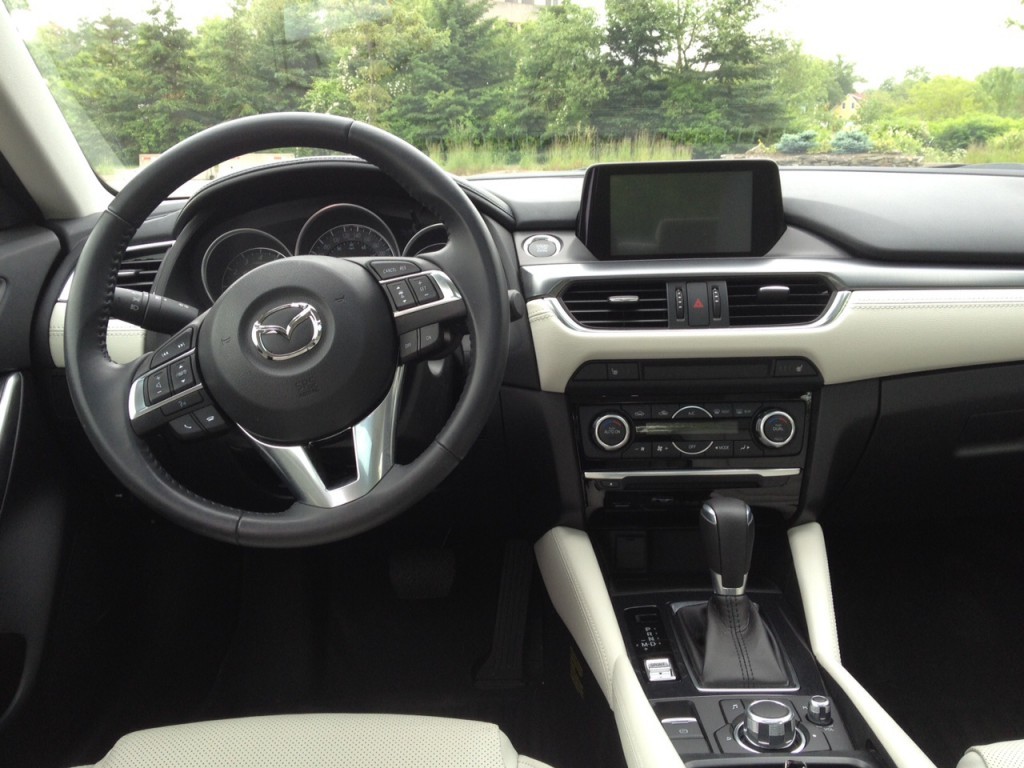 There are notable changes to the interior as well most notably with the infotainment unit. Not only does it blend into the dash better than even some Mercedes-Benz models, but it is quicker and more intuitive.  It’s controlled by a toggle switch and buttons down between the two seats, which initially takes some getting used to, but it does keep you for reaching. 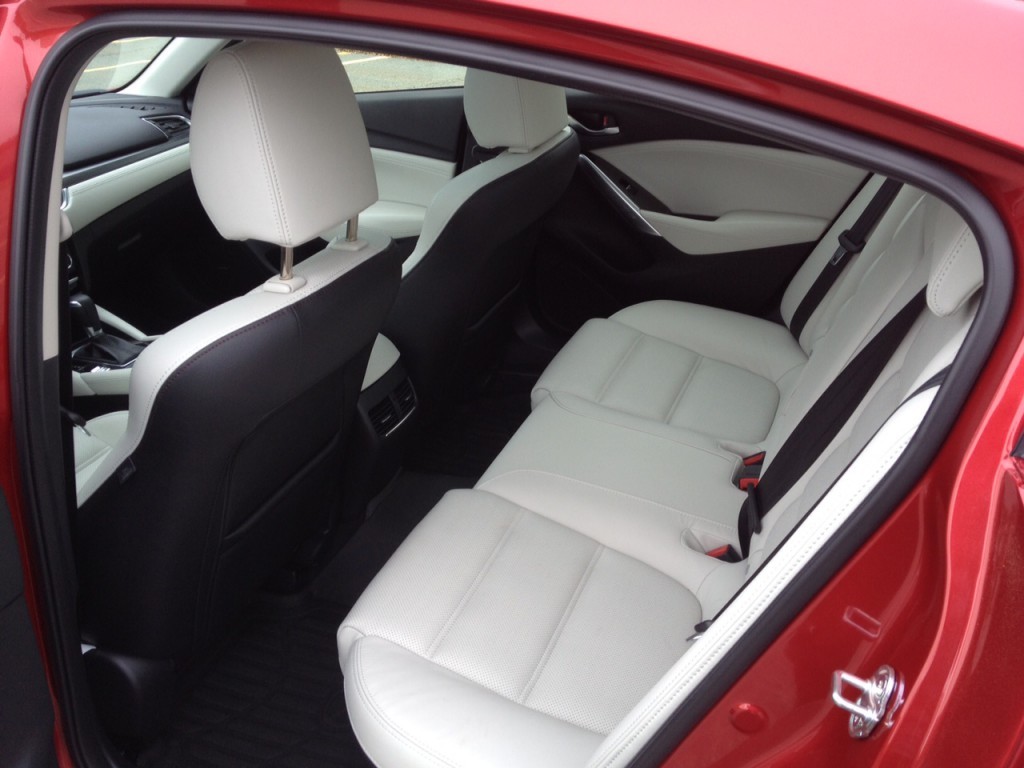 The design of the interior itself rivals those from premium or even luxury brands. Everything is simple yet elegant and fit and finish is spot on. The only thing that continues to feel a bit out of place is the strange head-up display which is projected on a rather cheap and flimsy looking squared off piece of plastic which rises from above the instrument cluster. It was an interesting idea, Mazda, but a true head-up display makes much more sense.

While not the most spacious cabin in the segment, it certainly will still do the trick for most, though entry to the back seat can be a bit difficult thanks to the sloping roofline. Rear trunk space is good, but again bested by some rivals. The rear seats do fold for added capacity. 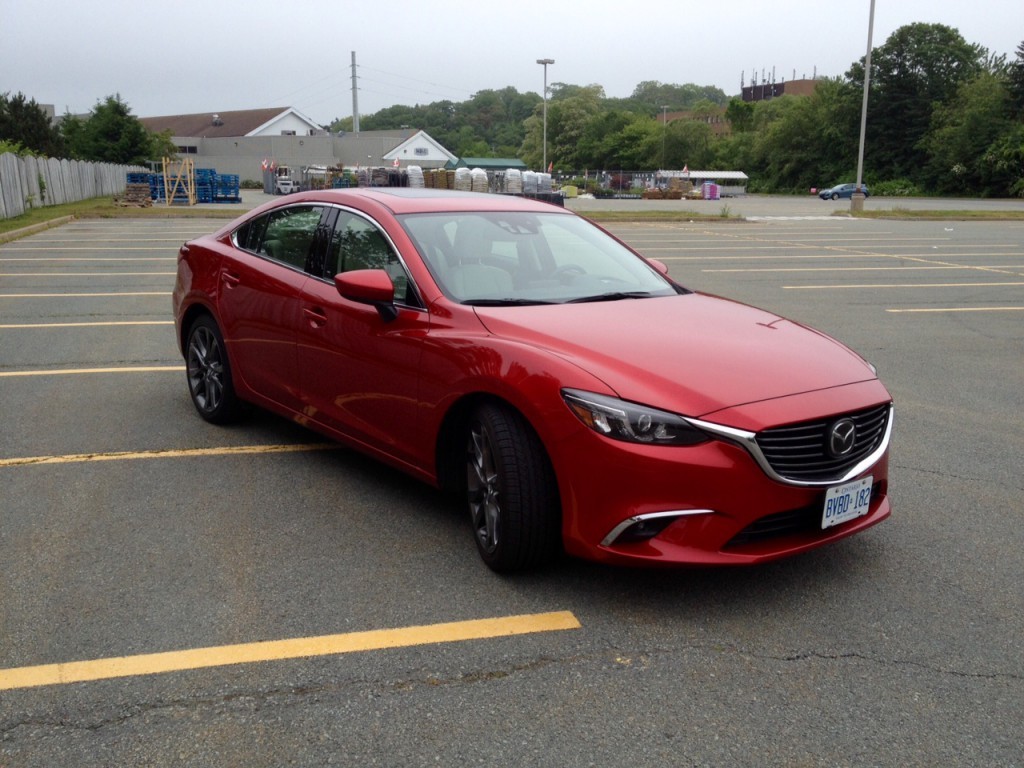 You can have any engine you’d like in the Mazda6, as long as it’s the 2.5 litre naturally aspirated SkyActiv 4 cylinder. It produces 184 horsepower and 184 pound feet of torque. Even though you get no choice with the engine, you surprisingly (in a good way) get your choice of a six-speed automatic or a six-speed manual regardless of the trim level. 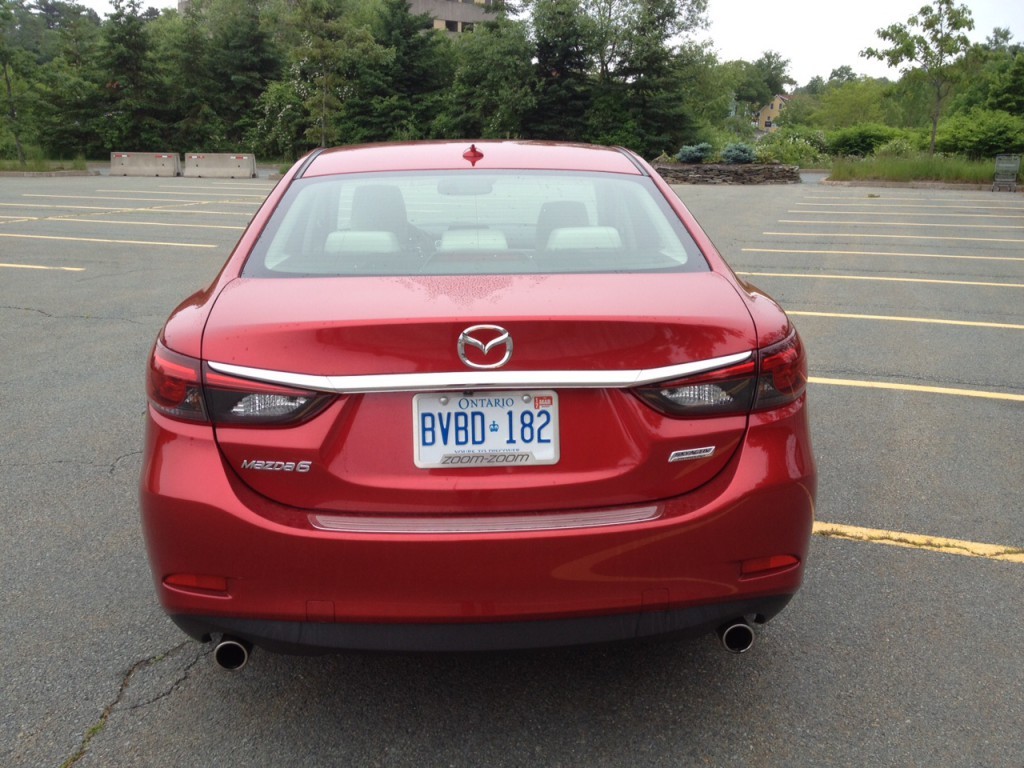 The engine itself is decent and would be adequate for most, though you’re likely to get much more out of it if you opt for the six-speed manual as the automatic tends to upshift quicker than I would prefer in the name of fuel efficiency. While it’s true you can shift the gears yourself through the gear shifter or paddle shifters, let’s face it, you can’t beat the true control of a manual. But if you don’t want a manual for some insane reason, you can still hit a little switch to get more out of the engine. The sport button opens things up and suddenly it feels even more like a Mazda than before. It hangs on to revs longer and is generally more responsive. 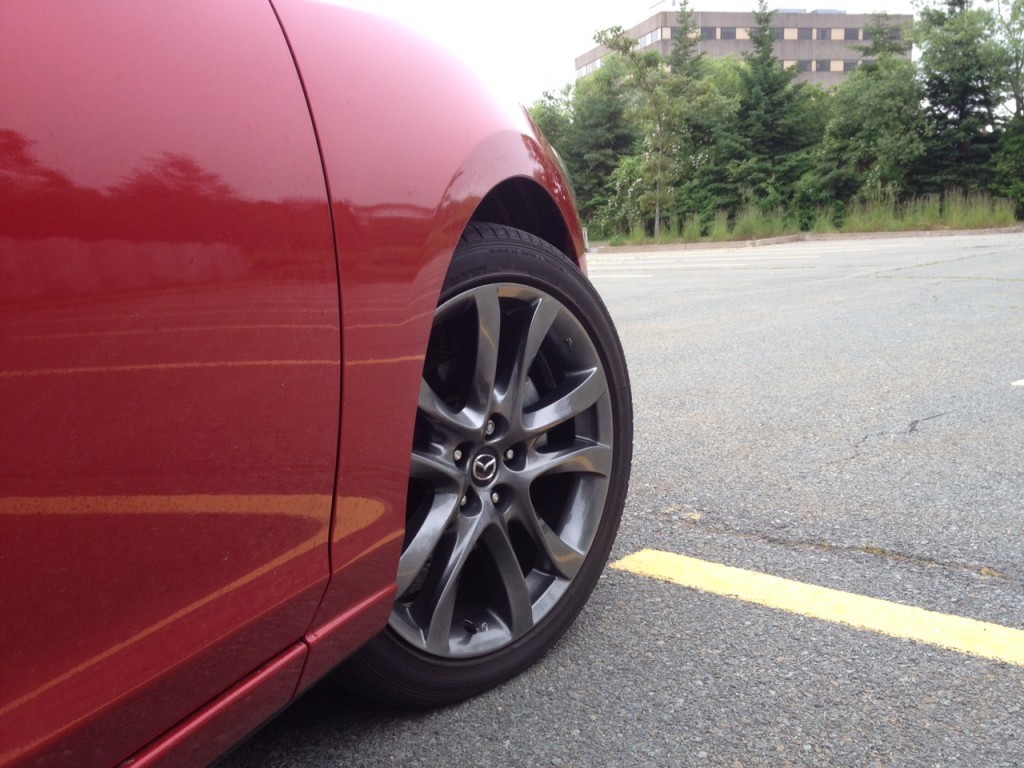 This is particularly where the 6 tends to show its forte. Despite the large nature of mid-size sedans, the 6 is able to not only keep its composure in the corners, but till put a smile on your face while doing it. It also certainly helps that the 6 has near perfect steering feedback which eggs you on to push it harder.

I can already hear your counterargument, normal human. You’re going to say “handling and sporty drives don’t appeal to me because I don’t drive aggressively and I hate people who do”. Well, you don’t necessarily need to drive aggressively in order to appreciate the wonderful balance in the corners. Even taking a regular corner at normal speed can be somewhat satisfying. 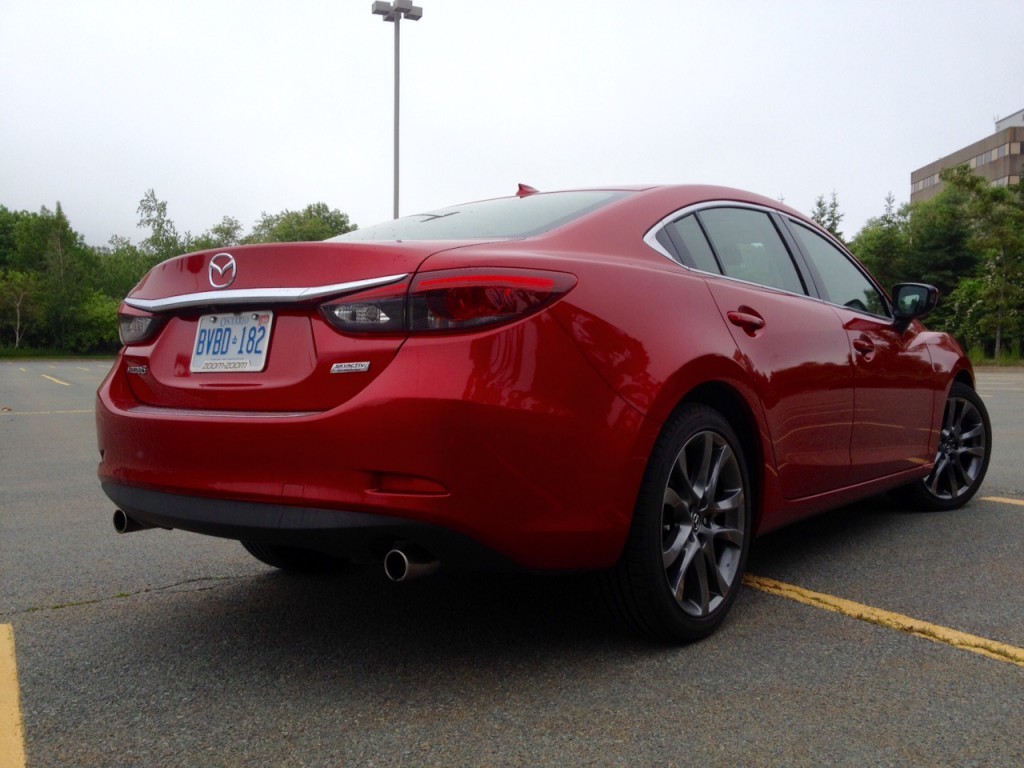 Plus, having great handling is something all cars should have regardless of your driving style. When you have a car that is capable with taking a corner with little fuss, it means you would be more likely to keep control of it during an emergency manoeuvre such is someone almost side swipes you on the highway or if Bambi doesn’t look both ways before darting out in the street.

And speaking of the highway, that solid feel exudes both confidence and comfort. Those 19-inch wheels don’t impede much in terms of road noise or harshness either. 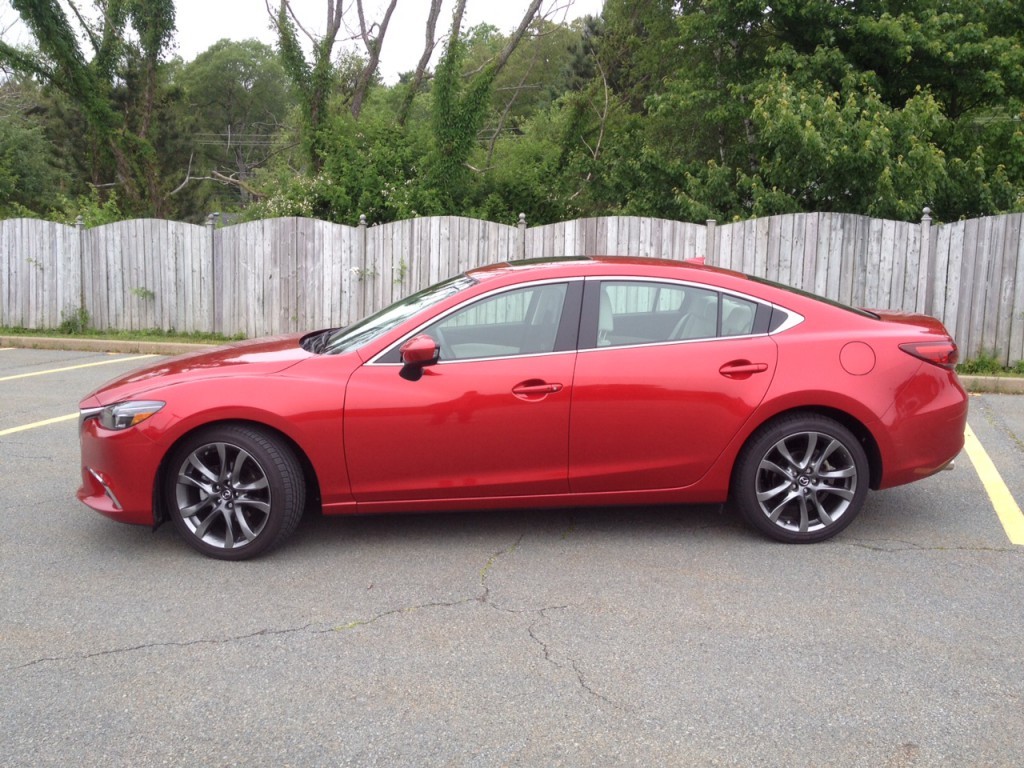 The 6, when optioned with an automatic transmission such as my tester, is rated at 8.8 L/100 kms city and 6.1 L/100 kms highway. I drove a week in mostly city driving and returned the exact city rating; 8.8 L/100 kms. While it would often be ideal to beat that rating, the fact that I drove spiritedly more often than not means that it still did fairly decently on gas. 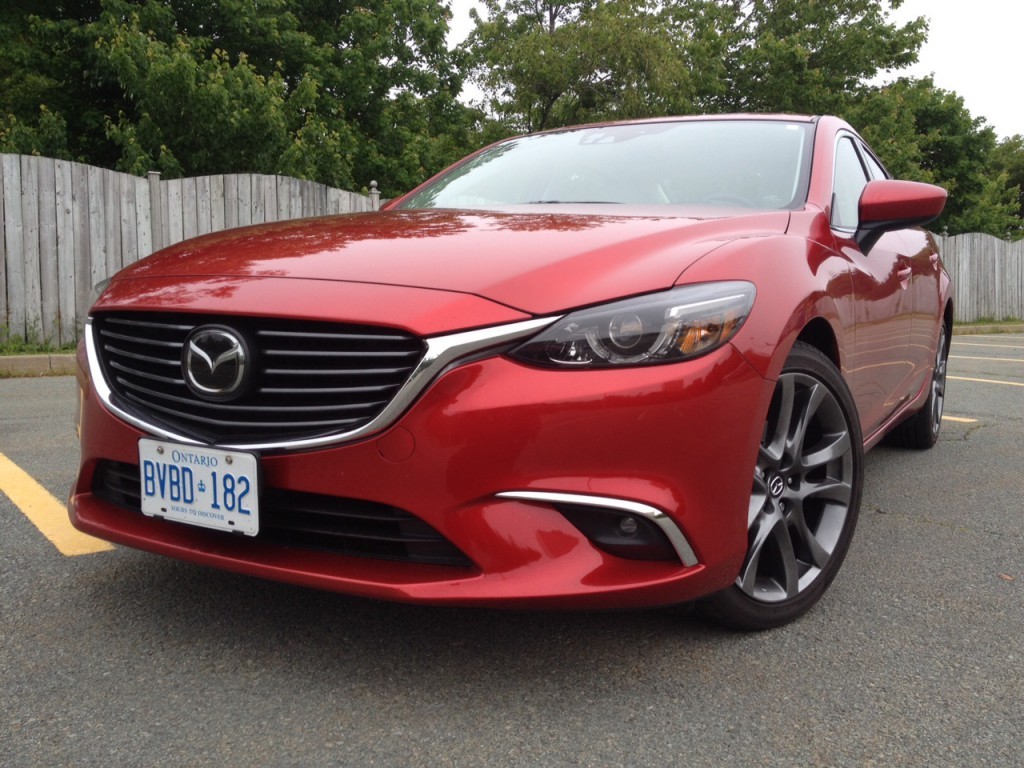 So there you have it. One of the best cars you’ll never buy. But having thought about it a bit more, you normal people might have an interesting argument on your side. You see, the 6 as tested rang in at over $37,000. That is pricey, but not completely out of line with what its competition’s top trim mid-size go for. The problem is, a lot of the competition offer a V6 at this price point. And if they don’t, then they at least offer a turbocharged 4-cylunder to get the power you’d expect at this price. But as mentioned, Mazda is a one trick pony in terms of engine choice. While this may not be enough to scratch it off your list completely, it is definitely something to keep in mind.

Then again, you don’t listen to anything I say as an auto reviewer anyway so what do I know? All I know is, this is a great car.