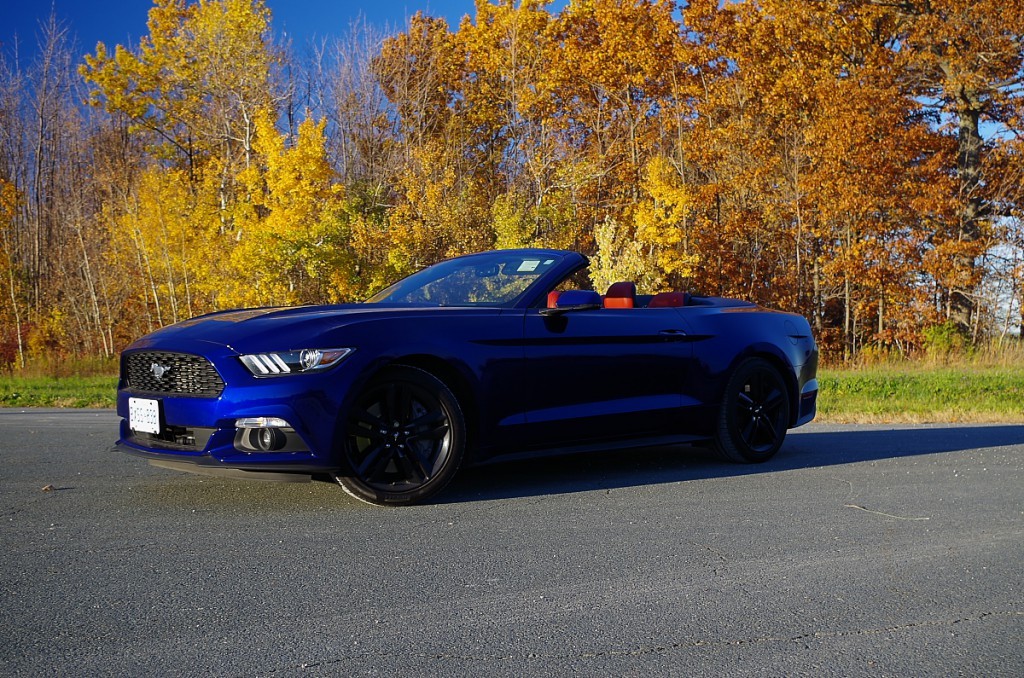 A few months back when I was making arrangements to test a few vehicles I was asked if I would like some seat time in a Mustang convertible. The only answer to that is absolutely! When I received confirmation for the booking I was at once excited and very worried. The date for pickup was the 7th of November. Umm this may be a problem! As November drew closer the temperature seemed to be holding. Fortunately the forecast for that week was still double digits for a day or two.

The Mustang I was supplied was the 2016 Ecoboost 2.3L convertible. Let’s be clear here the 2.3L’s are not dispersed across 8 or even 6 cylinders, no just 4. This raises a few concerns chiefly can an American muscle car be powered by a 4 cylinder? What about the noise, torque, burnouts??? 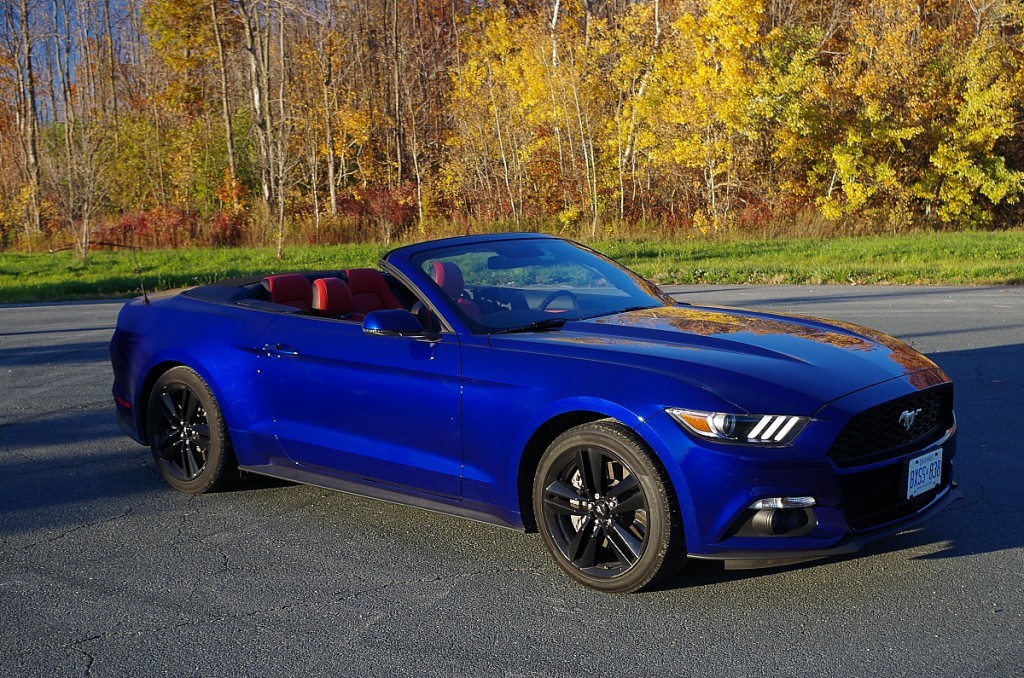 Back in the early 2000’s the big three thought it would be great to give into a bit of nostalgia. Right from day one Ford was trying to capture the classic forms that made past Mustangs great; but it seemed like the designers were focused too much on classic looks and not enough on developing a modern interpretation. I know a few owners of the 5th generation (2005- 2014) and they love them, proof that beauty is in the eye of the beholder. The latest model has achieved the perfect balance of classic and modern lines. This is the best modern expression of the classic American muscle car yet. The Ecoboost Convertible seen, here finished in Deep Impact Blue, is nearly indistinguishable from the GT. Those in the know will pick up on a few differences but to the general populace it looks every bit as exciting as the GT. The new less retro design to my eye makes this generation the best looking yet. 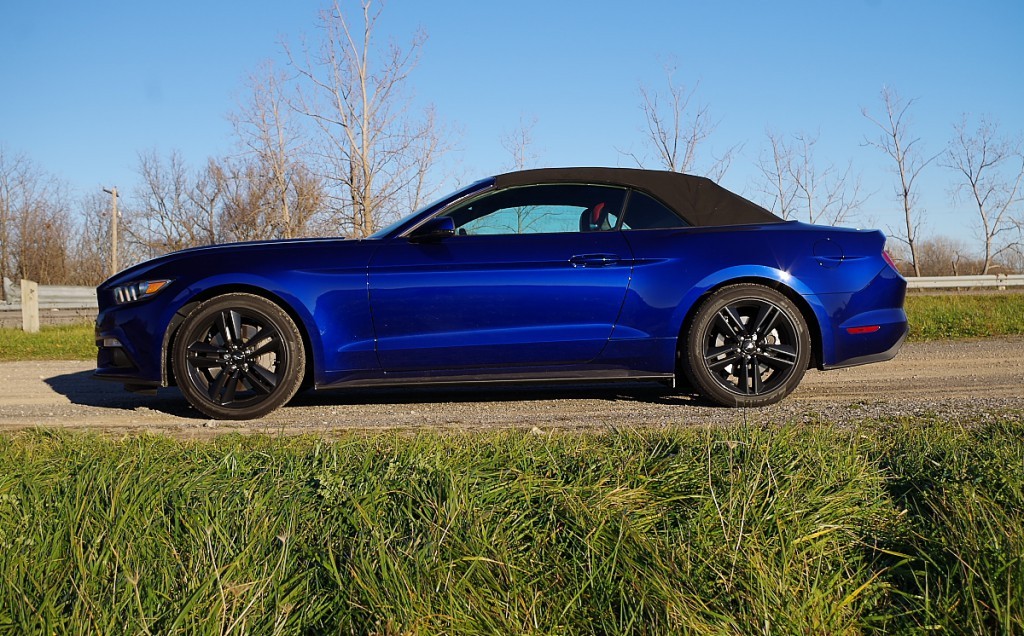 The cloth convertible top drops silently in about 8 seconds and raises just as quickly. It is simple to use as well, just twist a handle then press a button. You must be parked or at least not moving to do this. Once down there are two plastic covers that pop under the trim molding to prevent debris from accumulating in the mechanism. They also add a finishing touch the clean lines when you go topless. Black rims and broad 255/40R19 tires provide evidence of this ponies sporting potential and build on the muscle car image adding a more powerful look. 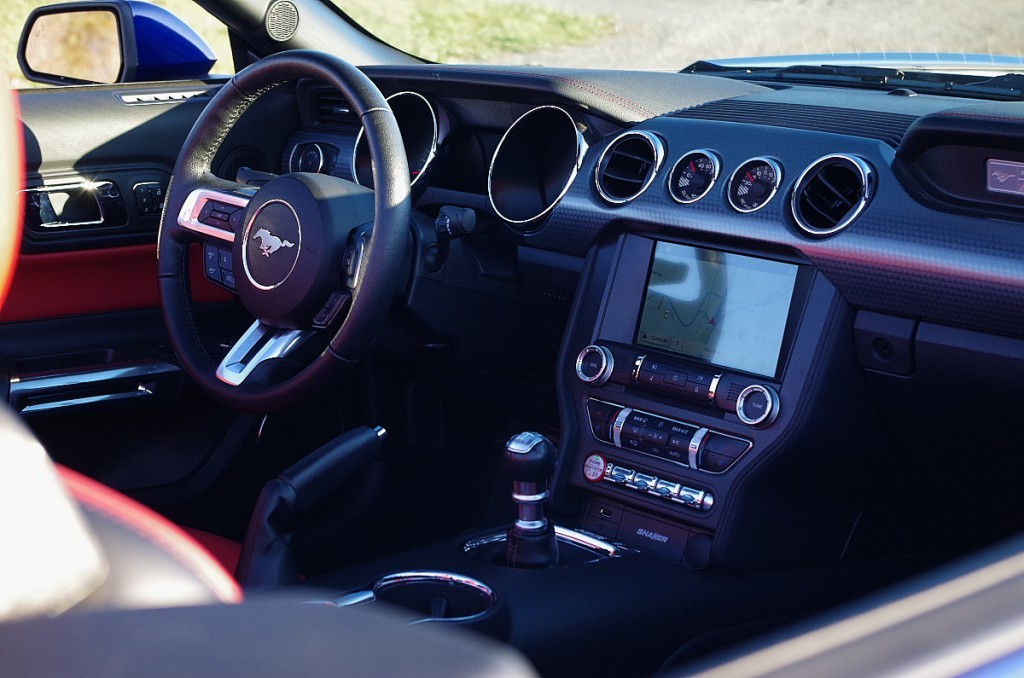 With the top down you cannot help but admire the attractive interior and red leather seating. The red is a deep almost burgundy which compliments the dark blue paint job nicely. There are two rear seat belts but in no way will I say this car will seat 4 or even 3 for that matter. There wasn’t enough space to slide my hand between the passenger seat back and rear seat cushion. Just think of the back as more of a padded shelf. As with the exterior the inside uses a blend of modern technology with classic looks. The controls for the hazard lights, traction control, steering mode and driving mode are old school rocker switches that look and feel fantastic. Above them there are buttons and knobs for the HVAC and entertainment system. None are strictly necessary but all are appreciated as the SYNC3 system will control all of these functions; I just prefer the old ways.

One thing that never went unnoticed at night when I hit unlock on the key-fob was the mustang (horse) projected from the bottom of the side mirrors onto the ground. The light is totally extraneous but it does add to the wow factor. 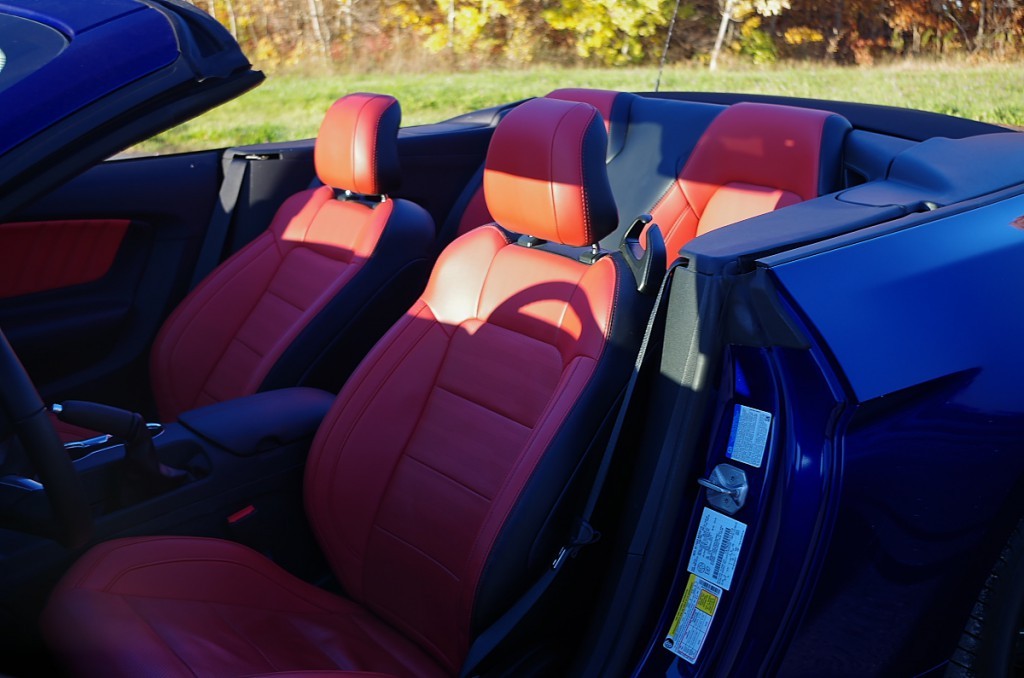 Sitting in the driver’s seat I noticed that the tach and speedometer are not quite angled right. No matter how high I lifted my seat I could not see the bottom portion of the gauges which happens to be where the fuel gauge resides. Other than that minor quibble the stang spoils you. Oh, and as an added bonus for choosing the Ecoboost you get extra gauges in the centre of the dash for oil and turbo boost pressures.

The seats are all day comfortable but will keep firmly in place if the road gets twisty. Everything you are meant to touch is finished in quality materials, with bare plastics making an appearance in the lower extremities. Overall a great package that is as easy to live with as it is pleasing to look at. 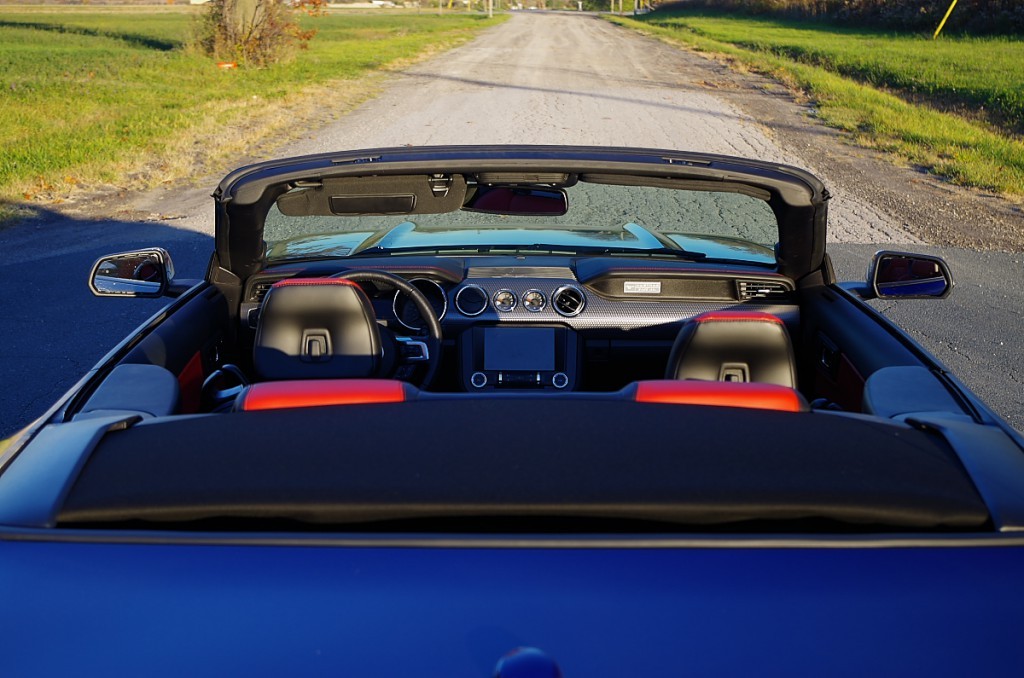 Here’s the rub. Ford has positioned the Ecoboost above the V6 in both price and performance; however, this puts it in direct competition with the V6 Camaro that delivers 335 hp and 284 lb-ft of torque not to mention a great sound track. The Ecoboost makes very good power from a 4 cylinder at 310 hp and 320 lb-ft. but lacks the soulful sounds of larger engines. From the outside it barely makes any noise at all, which makes it a nice relaxing cruiser but fails to elicit any sense that you are in fact driving a Mustang. Inside all you get is a low groan and vibration that occasionally gets louder. What the Ecoboost does do well is deliver more than enough mid-range torque. Peak torque comes on early at 2,500 rpm; much sooner than in the V6 Camaro. This means you do not need to drop gears to pass or accelerate for an on-ramp. I still did of course, but that was just in hopes of breaking the rear tires free. 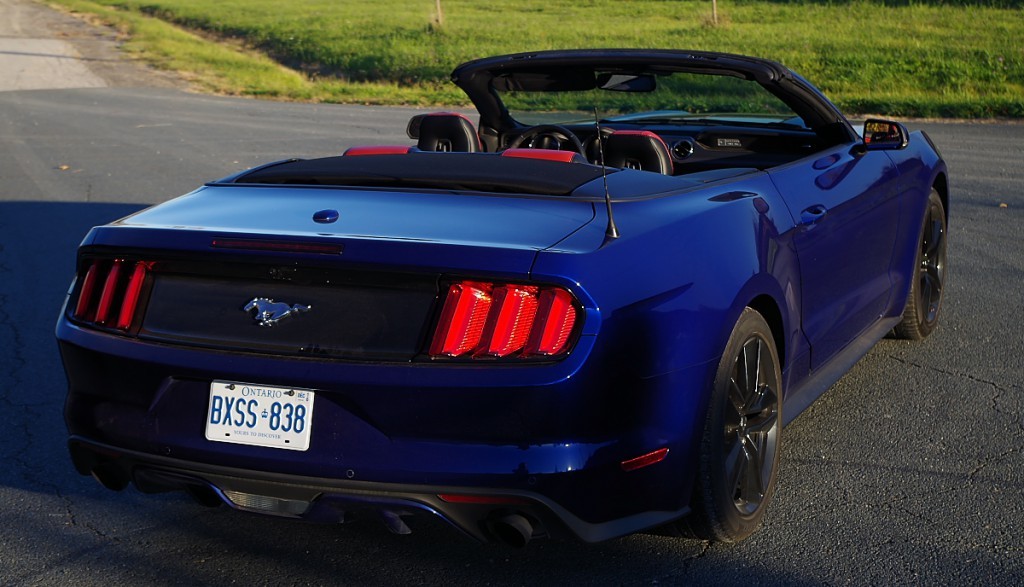 One rainy night on my way home with the traction control set in the wet/snow setting I stomped on the throttle in 2nd gear to see how much the computers had restricted things. Turns out not enough; keep in mind that I was driving on an on-ramp that is arrow straight when the rear end let go and started to come around on me, great fun, just unexpected. This got me wondering whether a 4 cylinder could do doughnuts from a standstill on dry pavement. This is a muscle car after all and that sort of behaviour is required. The short answer is almost, in Track mode. I achieved a 180 degree rotation before the computers stepped in and ruined things.

The back roads were the perfect place to test the handling and grip provided by the meaty Pirelli P-Zeros. Even with the top lopped off the Mustang felt rigid and stuck to the road like a bug to a windshield. The quicker I drove the better the car behaved. I know for a fact that I was nowhere close to the limits of this cars abilities, not once did the tires complain no matter what I put them through.

The suspension is well balanced providing crisp handling and comfort even on rough roads. My tester came with a 6-speed manual that featured short throws, a mechanical feel but a slightly heavier clutch than I expected. Despite the shame of having to explain to everyone that this was not a GT V8 but a lowly inline 4 with a turbo, the Ecoboost will accelerate briskly enough to put a smile on some of the toughest of critics. 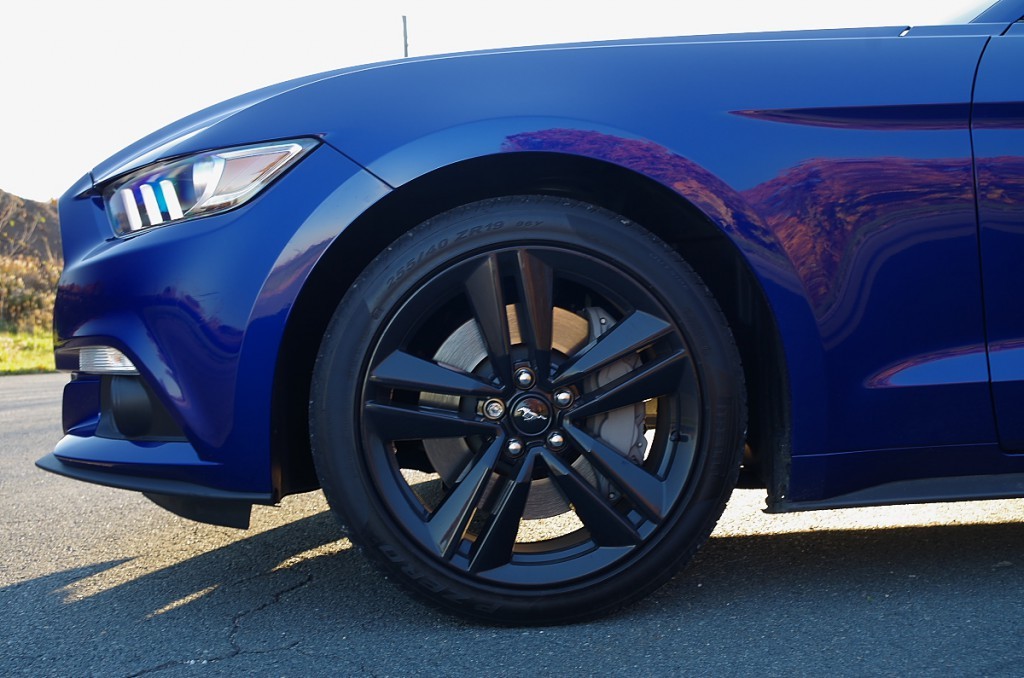 Over my week I achieved an average of 10.4 L/100km of premium fuel consumption. Given that I was heavy on the throttle and drove on many hilly roads this is not bad at all. According to the Natural Resources Canada research the 2016 Ecoboost Mustang Convertible will use 11.6 city and 8.0 highway with a combined usage of 10.0 L/100kms. This is where the smaller engine pays off. Compared the V8 convertible the 4 cylinder will save you $558 if you drive in a socially responsible manner. This cost is based on the assumption of driving 20,000km annually and a fuel price of $1.o9/L for premium fuel. The reality is likely far more frightening to penny pinchers. Driving the GT V8 in a “fun” way will result in severely worse consumption as it should. 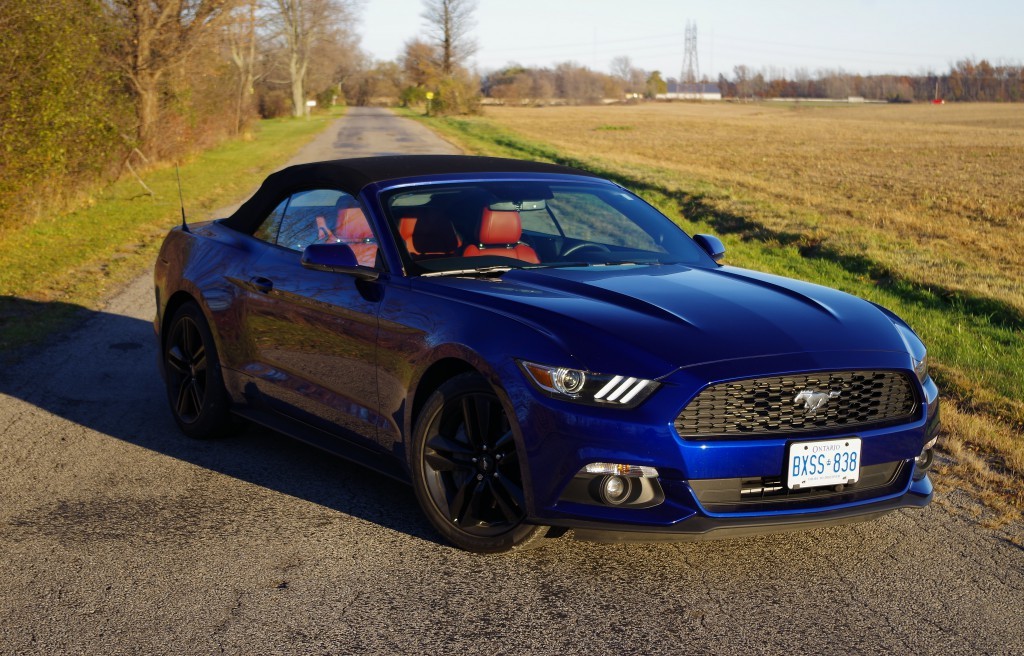 I like how this car hints at the way things were without reminding us why we left them behind. It strikes the perfect balance between retro form and modern technological advancement. The Ecoboost makes a good argument for the validity of a 4 cylinder muscle car, which is comforting because the V8 as we know will soon be extinct. While it fails to deliver the sensational soundtrack of it big brother it still has all the right moves and could easily keep us entertained for years.