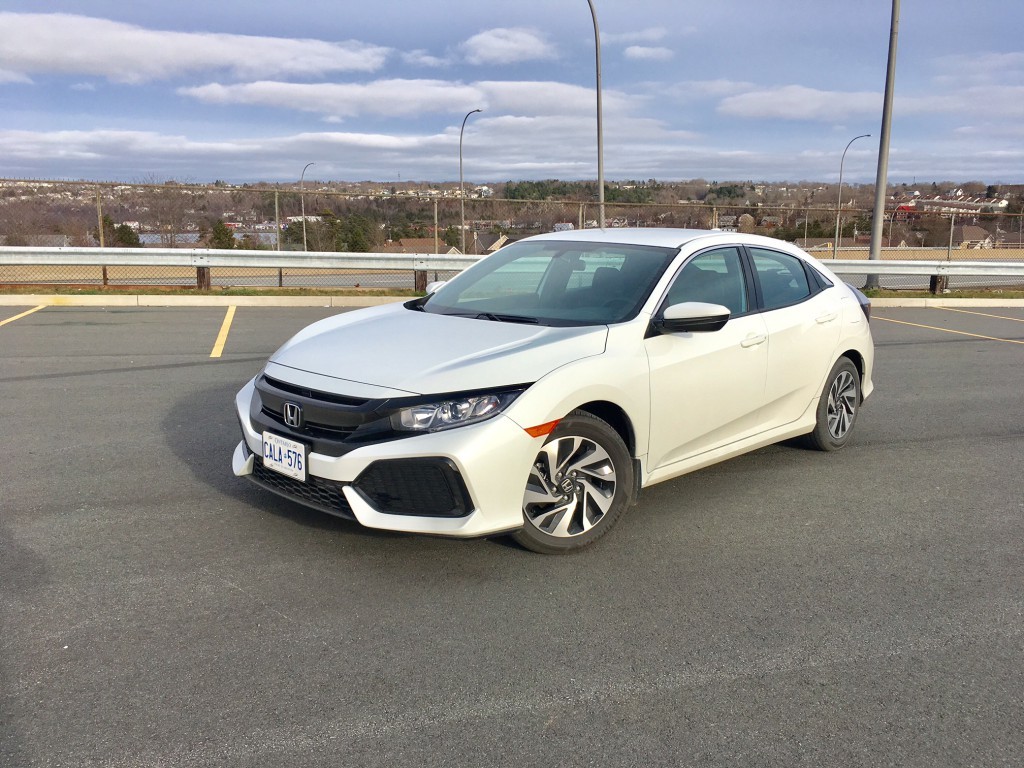 The Honda Civic has long been a Canadian favourite and go to. It consistently is at or near the top of compact segment sales which is why you can’t leave your house without seeing one, or ten.

In many ways, this makes a lot of sense. The Civic has always had brand recognition on its side along with decent driving dynamics, good fuel economy, a decent quality interior and high resale to boot.

But in other ways, this doesn’t really make much sense at all.

Unlike Americans who prefer SUV’s and CUV’s, we Canadians love our hatchbacks. As such, most of the Civic’s direct competitors offer a hatched version of their compact sedan. Mazda has the 3 sport, Subaru has the Impreza five-door, Toyota has the Corolla iM, Ford has the five-door Focus and the list goes on.

The Civic? Not so much. The only other body style available for decades is the coupe. Honda may have made the argument that they maintained a top sales spot without a hatch, but now they may be realizing how many more sales they could have with one in the lineup.

So, the Civic hatchback (in five- door configuration) has returned after a 38 year hiatus. Seriously, it’s been that long. 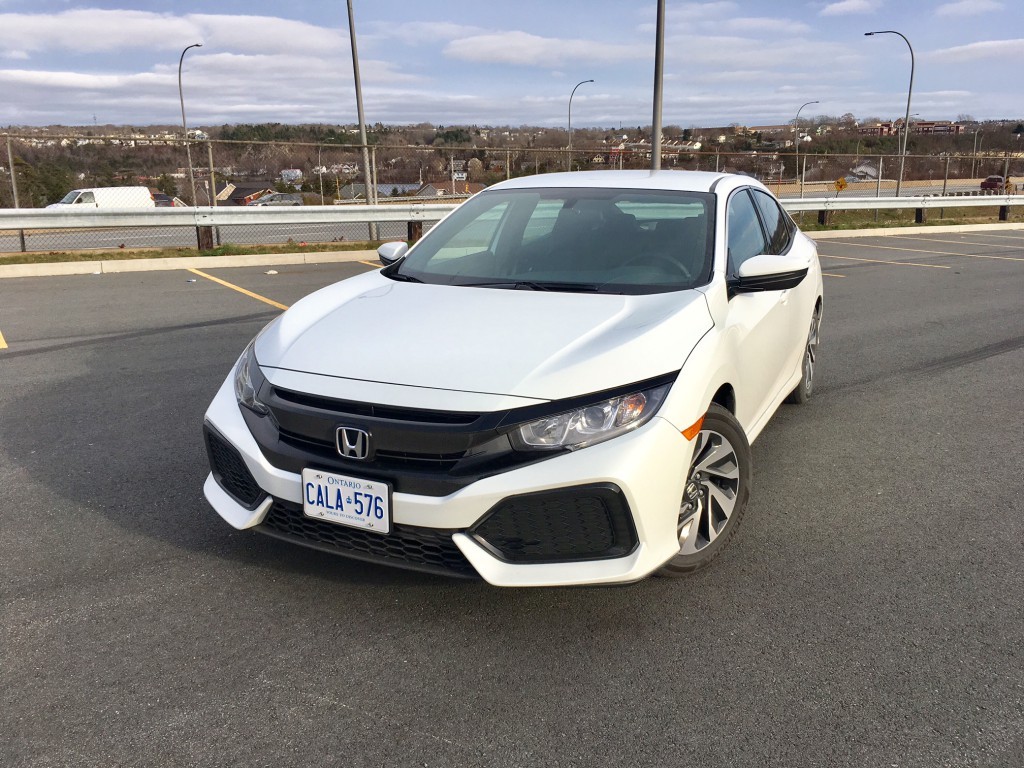 The latest generation Civic has taken a much needed risk in the styling department and the end result is a car that is a bit polarizing. Personally, I am a fan of the sedan’s styling and am an even bigger fan of the coupe’s styling. The hatchback does a decent job of encompassing the same design language, but in my opinion, the execution isn’t as clean.

Up front, the hatchback differentiates itself from its non-hatched brothers with black trim for the grille and a restyled bumper. The base model LX gets alloy wheels.  In the rear, the hatch gets a similar tail light treatment to the sedan, but also includes a turbo decal along with a black spoiler. The rear gets a more aggressive bumper design as well. My not so scientific poll had people split on the rear end design. It’s certainly different, and I like that, but again, I feel the execution could be a bit stronger. 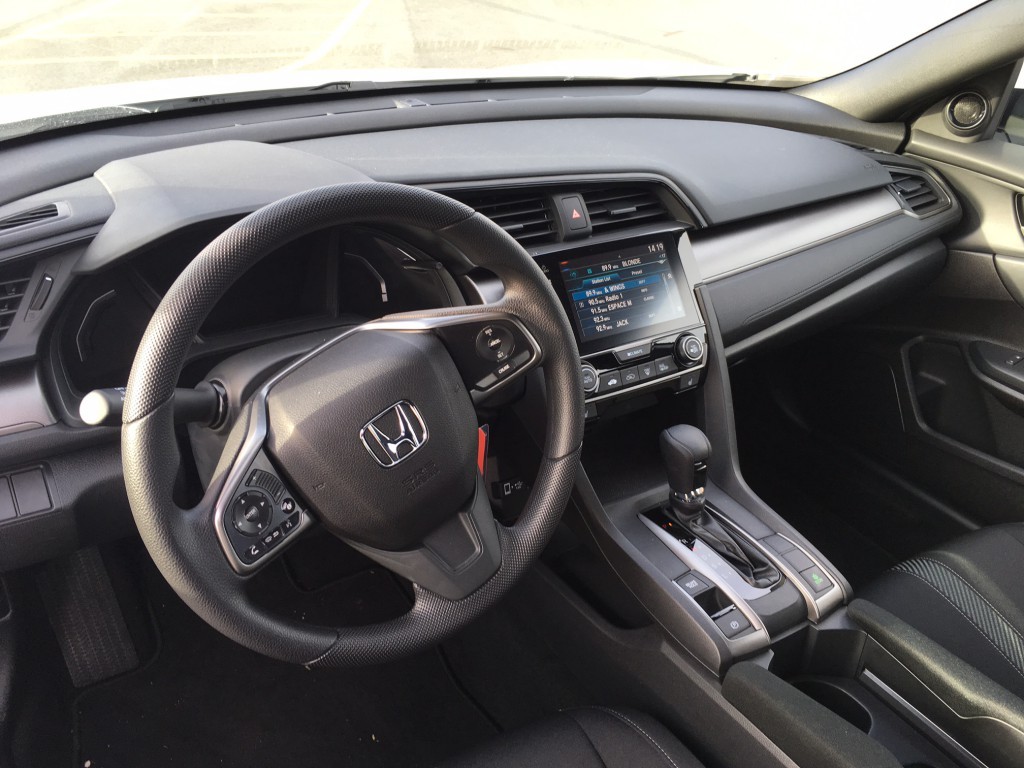 There is little to no changes with the interior design from the sedan and that is very much a good thing. The new design is clean, logical and of decent quality. Everything is pretty much where you’d expect it to be, with the exception of the volume knob, which Honda has stupidly decided to get rid of. I cannot express to you how annoying not having a volume knob is. Yes, you can adjust the volume more easily from the steering wheel, but that does nothing for your passenger if they are so inclined to adjust the volume. I am pleased to see the return of the volume knob of the all-new CRV, so hopefully it will be making its comeback in other models as well.

The infotainment system is clear to read, but cumbersome to use. It doesn’t always respond to commands and its set up isn’t as user friendly as some of its competition (think Chrysler’s U-Connect).

Most would be pleased with head, leg and knee room in both rows and the seats, while a tad on the firm side are decently supportive. The heated seats (which are pleasantly standard on the base model) heat up very quickly, which is good, but almost to a point of being scorching. Honestly, I shouldn’t have to choose between having a warm rear and maintaining an average sperm count. Do yourself a favour and just keep them on the first setting. 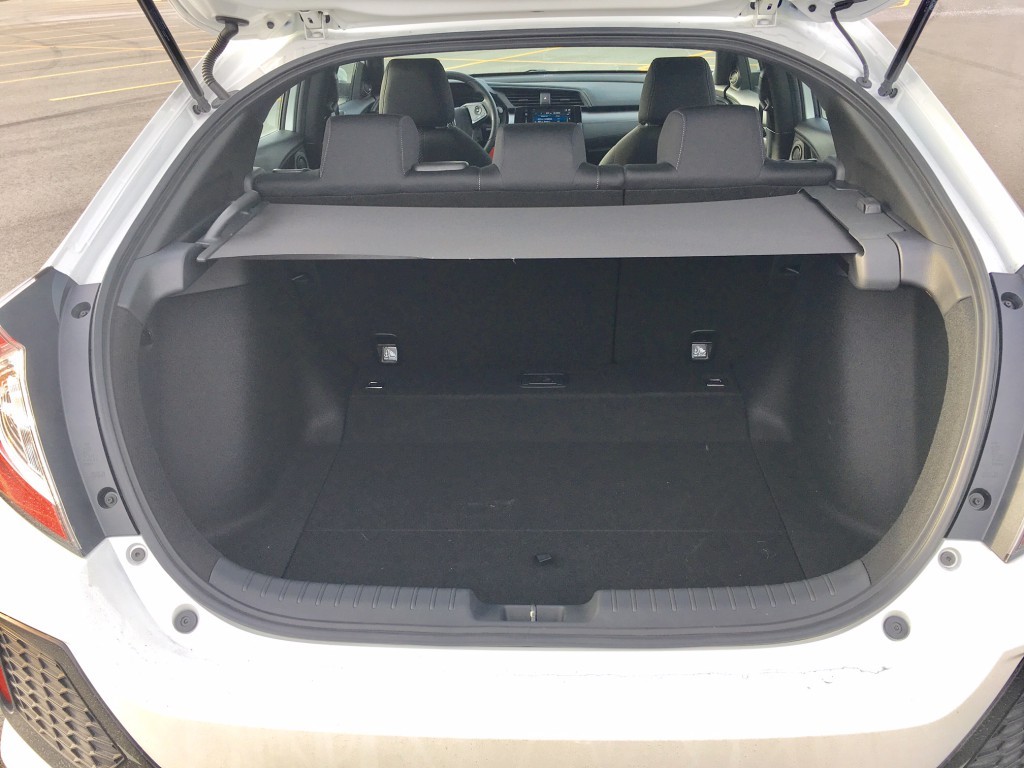 In the hatch, you’ll find one of the cleverest privacy covers in recent memory. The cover rolls from side to side, spanning the width of the cargo area. It’s also removable and is way more compact than traditional privacy covers. This allows you to keep it in the vehicle if you don’t need it, or you can keep it in your garage without taking up a lot of space. Kudos to Honda for this neat feature.

Cargo room is, as you’d expect, bigger than the sedan by a little less than 11 cubic feet with the rear seats up. With the seats down, that number grows to just over 46 cubic feet. I didn’t get much opportunity to stuff the hatch with loads of cargo, but for the most part, this amount of space would be adequate for most. 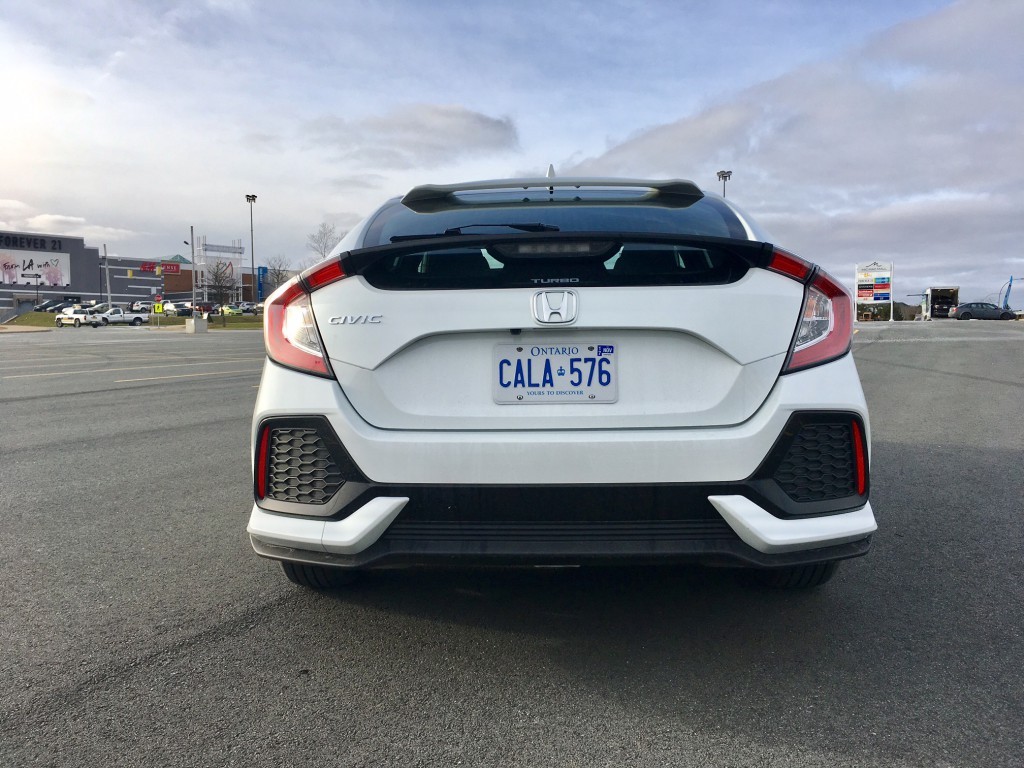 Unlike the sedan and the coupe, there is only one engine available for the hatch and it’s the 1.5 litre turbocharged 4-cylinder. However, the amount of power this unit produces depends solely on which tuned version of the same engine you opt for. Complicating things further is the fact that the transmission fitted changes power figures. So, in base LX, which has the lesser of the turbo’s,  and you elect the six-speed manual transmission, you’ll be getting 174 horsepower and 167 pound feet of torque. If you get the CVT, the horsepower stays the same but the torque drops to 162 pound feet.

Now, if you opt for the mid-trim Sport or the top trim Sport Touring, that 1.5 litre, which is tuned differently, will get you 180 horses regardless of the transmission. If you get the six-speed, you’ll get 177 pound feet of torque. With the CVT that number drops to 162. 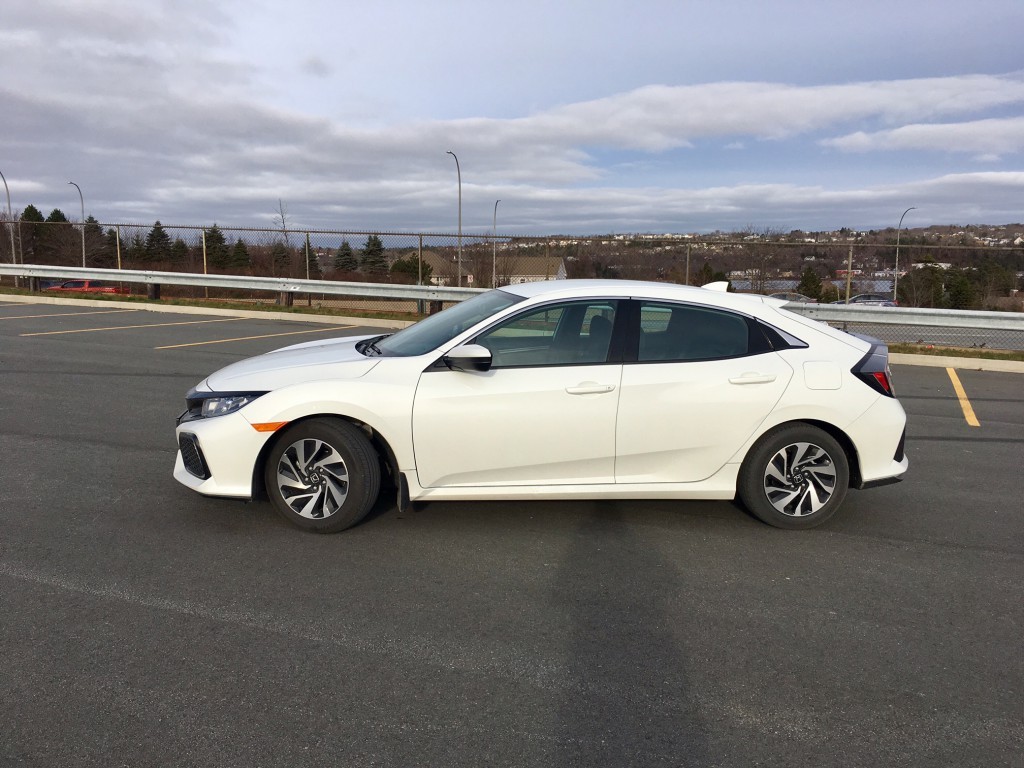 My tester was equipped with the CVT, which is the least powerful of the lot, but aside from wanting a bit more low end grunt, this engine performed well. CVT’s are geared for fuel efficiency – not performance – but of all the CVT’s around, Honda’s is among the best. It would have been nice to have paddle shifter or a way to shift those simulated gears manually, since does quite well, as I found out from driving the coupe, but it still performs decently.

I’d be very eager to see how this engine performs with more power and a manual transmission. 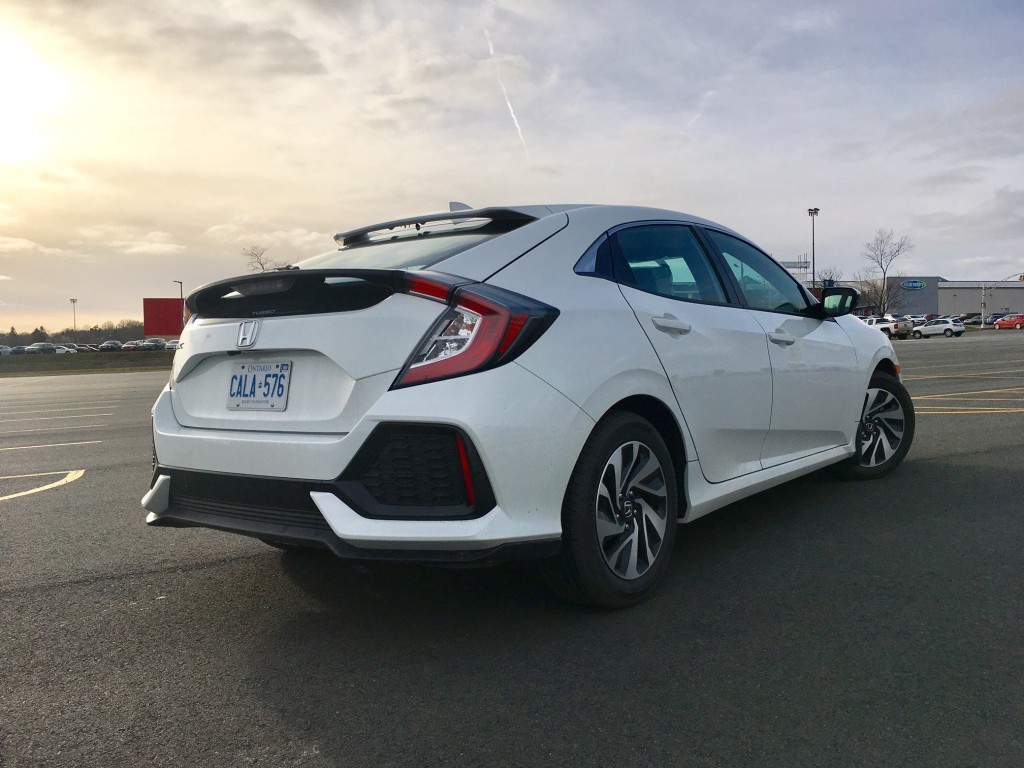 Gear heads love the idea of a ‘hot hatch’ which is basically a hatchback tuned for performance. The Civic hatch does not fall into this category, but that isn’t necessarily a bad thing. Bumpy roads don’t tend to shake the suspension much making for a relatively smooth ride.

That’s not to suggest that it isn’t engaging or that it is like driving a Buick. This car is game for some fun in the bends whenever you are. It feels relatively composed and only gets a bit out of sorts if you push it like you stole it and only then does a slight sensation of under steer becomes apparent. In general, you can toss it around with confidence. For those of you who actually want  a hatchback that you can drive around like you stole it with peace of mind, hang tight because the Civic Type-R is on its way. But for normal folk, this new hatch is more than adequate for performance.

On the highway, it feels low and planted. On higher trim models, you’ll get safety aids like blind spot monitoring and lane keep assist.

Around town the Civic is fairly maneuverable with decent visibility, except in the rear. The crossbar which splits the rear window is impeding, and the blind spots from the C-pillar are huge. Thankfully, a back-up camera is standard which definitely eases some of the stress of reversing into or out of a parking spot. 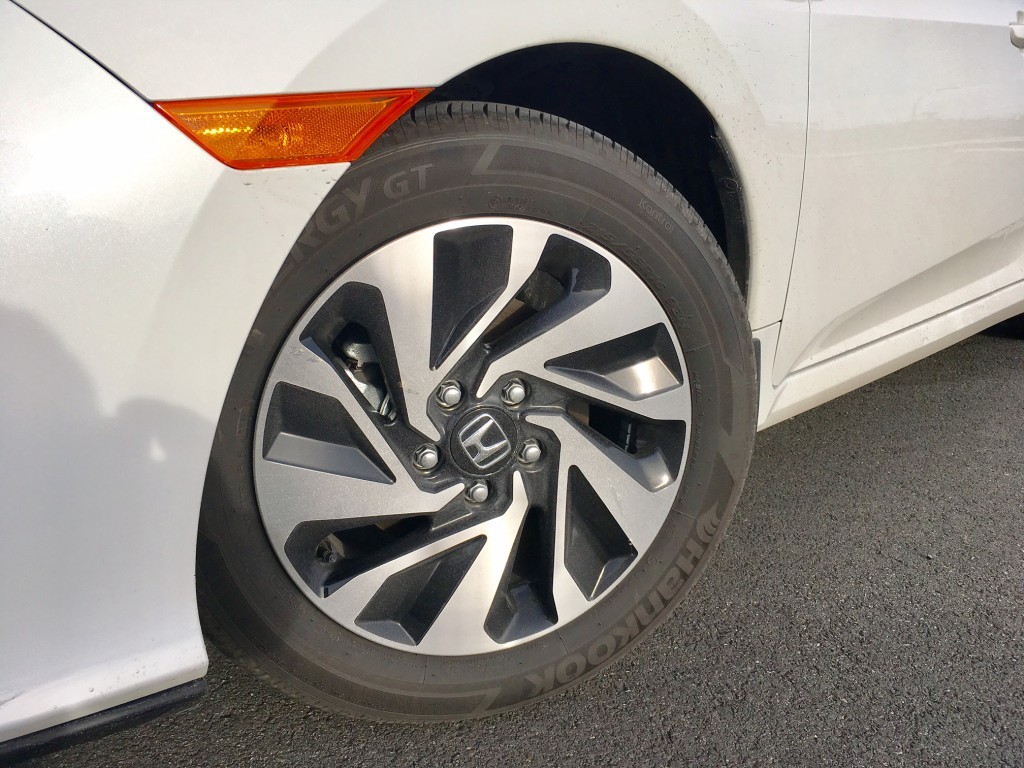 Since the engine/power ratings for the new Civic hatch are complicated, that means the official fuel consumption ratings are too. So, here we go:

Sport Touring with CVT: same as Sport with CVT

Clear as mud? As mentioned, my tester was the LX CVT and I returned 7.4 L/100 kms of mixed driving. Certainly not bad, especially considering the colder temperatures we’ve been having lately, but I should also mention that 85% of my driving was in ‘Econ’ mode. So if you prefer to have more zip from your hatch, expect your fuel consumption figures to dip as a result. 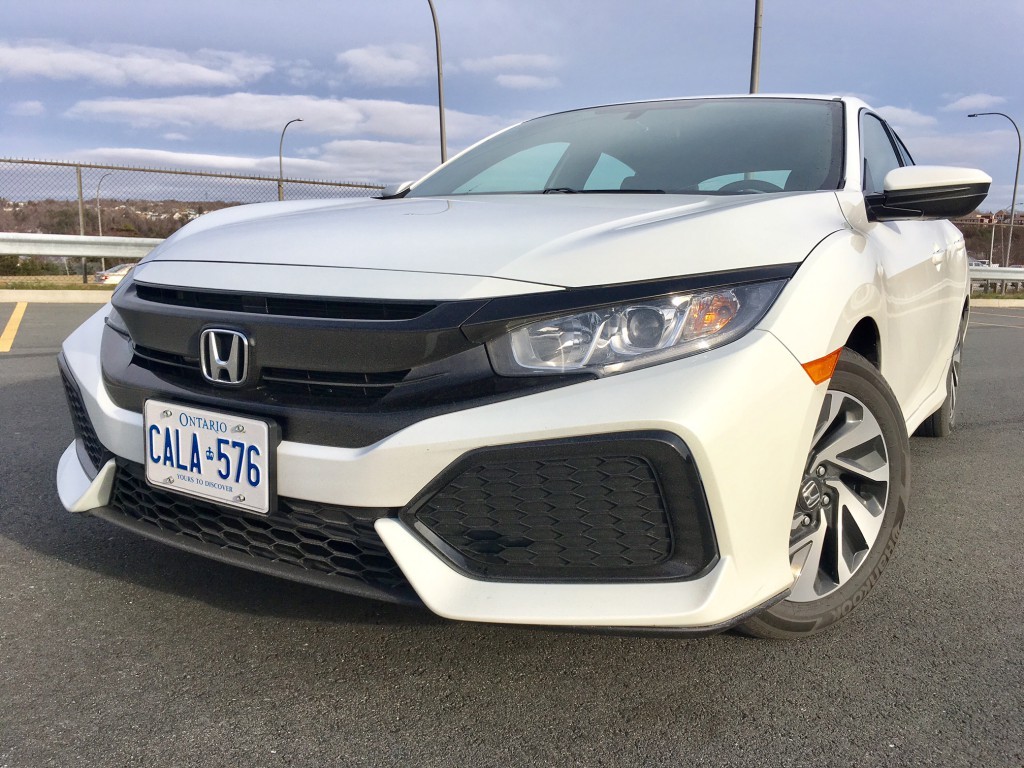 But the bottom line is it’s clear that Honda shouldn’t regret reintroducing the five-door version of the Civic four decades later. It does everything the newly redesigned Civic does and, in some instances, does it better. So, is it safe to say we’ll be seeing as many hatchback Civics on the roads as sedans?

The biggest issue with this new hatch is its price point. A base version of the Civic sedan starts at $16,390 excluding taxes and fees. The base version of the hatch is a whopping five grand more. Now, Honda will readily admit that they want to market the hatchback as the more premium of the three body styles, and considering you get a different and arguably better engine as standard along with niceties such as alloy wheels and heated seats, they may very well be justified. However, the issue may be that people genuinely just want a decent reliable ride which gets them from point A to point B with little fuss – exactly what the base Civic is. Those who want a hatchback version of that, are left paying for things they might not need or want. The base model is well equipped, but you’re paying for it.

Only time will tell whether this formula will work for Honda, but for now, let’s all just rejoice in the fact that if you want a hatchback from Honda, you aren’t relegated to just the Fit anymore. And overall, the new hatch does the job decently well.