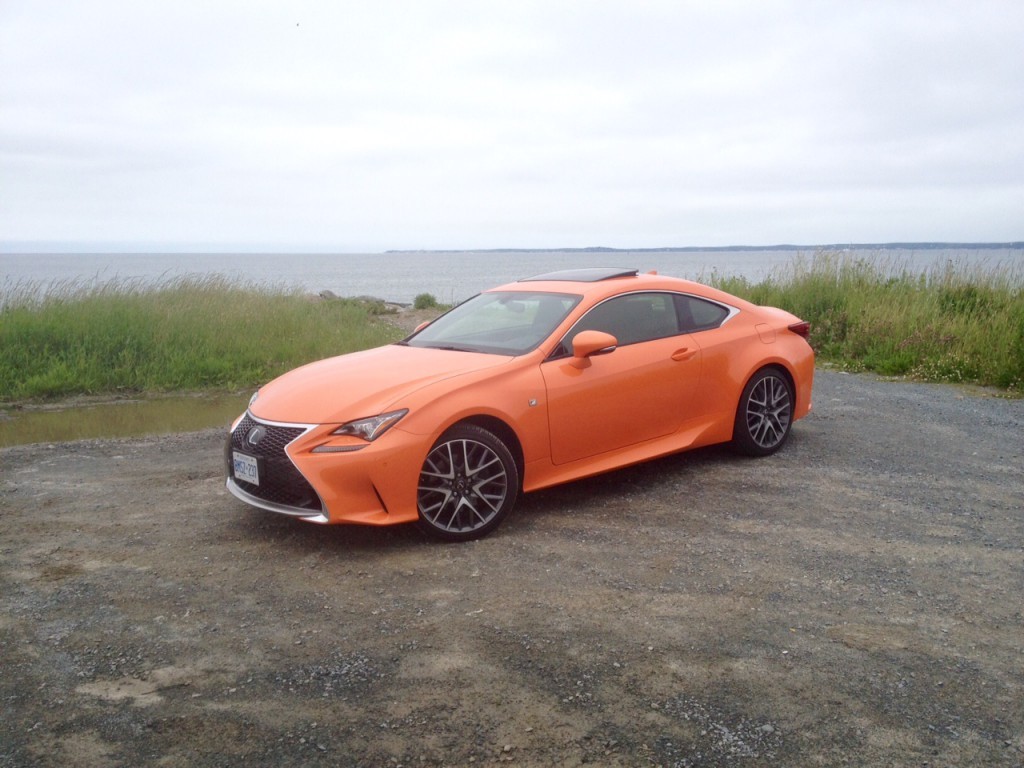 I’m not one who typically enjoys a whole lot of attention. That may partially explain my taste in car designs; more restrained perhaps even conservative styling. It’s hard to explain, but designs from BMW, Audi and the like are still eye-catching without being too shouty about it. I like that. I like designs that feel grown up.

So you can only imagine my apprehension when I found out that I’d be spending a week in the RC 350 F-Sport. Without having ever driven one, my dismay was more the result of being seen in something that has blatantly gone out of its way to say, “LOOK AT ME!”

Lexus, once a part of the restrained styling crew, likely grew tired of its designs constantly being referred to as boring. Even though they were conservative in nature, they didn’t necessarily grab the same attention that the German brands would, despite following a similar styling formula.

So in came the spindle grille, which became the corporate face of all Lexus product. The polarizing design seemed to be something Lexus enjoyed. Never before were so many people talking about a design from Lexus. In other words, there’s no such thing as bad press.

Possibly the easiest product to experiment with design is with a coupe. Coupes are inherently meant to be a bit showy, so when Lexus decided to enter the segment, they showed little to no restraint with the design as well.

The uneasiness I was experiencing at the thought of driving a flashy car was extraordinarily heightened when it finally arrived to my driveway.

It’s orange. Orange. Not some sort of sparkly metallic grey, not white that’s whiter than white. No, orange. 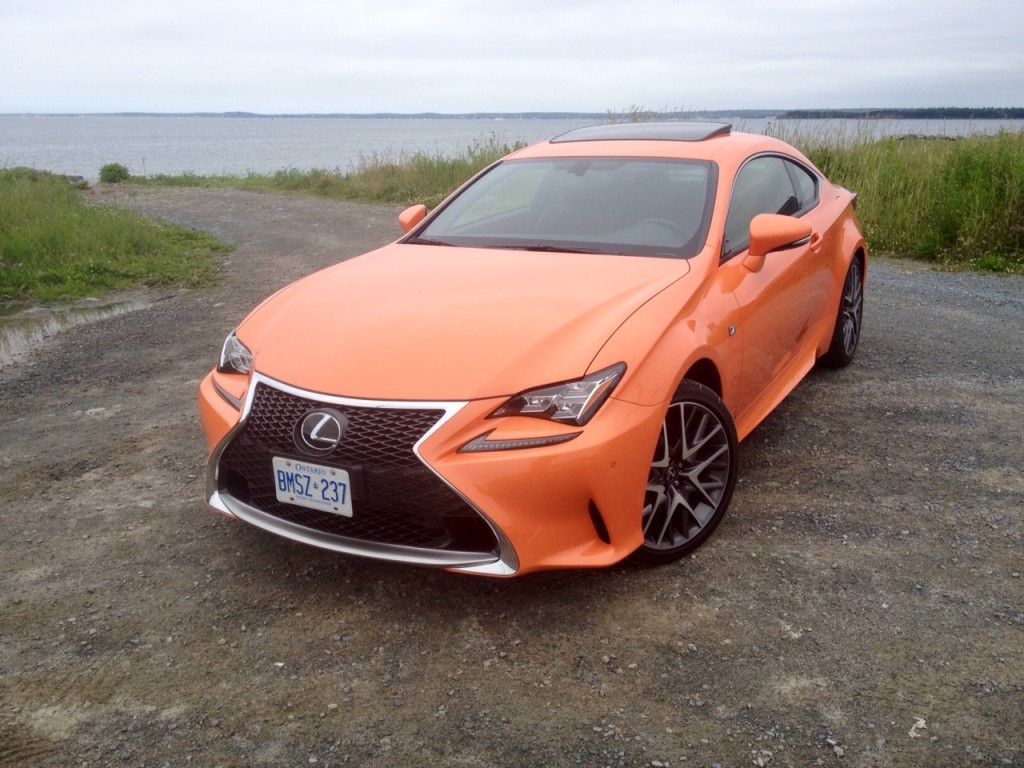 Actually, if we want to be a bit more specific, the colour is technically called ‘Solar Flare’. I think they could have called it creamsicle and no one would have objected. Aside from just plain being an eye-catching colour, it stands out a lot more than normal because of Lexus’ paint process. There are actually five coats of creamsicle on the car and, in person, it’s actually noticeable. Lexus is one of the few – if not the only car manufacturer – to use five coats.

As you can already guess, the overall styling isn’t 100 per cent my cup of tea, however, it certainly cannot be mistaken for anything else on the road. If anything, Lexus did a good job of blending corporate styling cues while making it completely distinct. There are air vents up front that are actually functional and fake ones in the back. The sharp tail and headlight designs further help with its uniqueness, while the intricately designed 19-inch wheels ensure   that you take extra care when parking next to a curb. 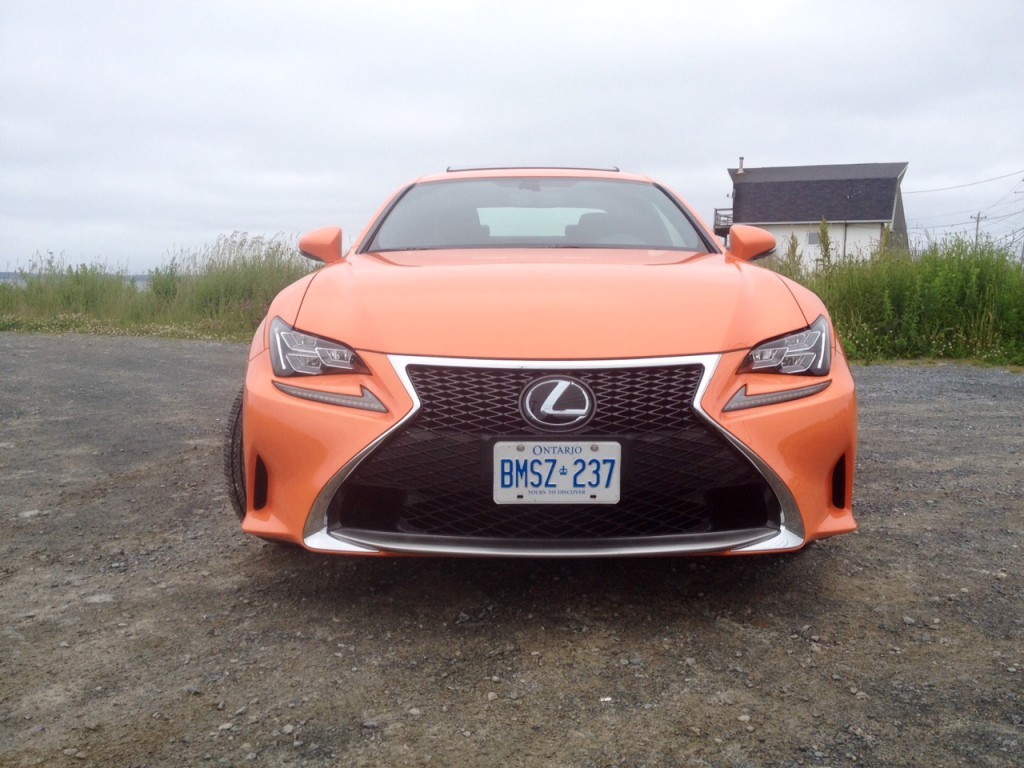 And that’s usually where I preferred to have it. It’s been a very long time since I had a press car that was the subject of so many snapchats. For a guy like me, it’s awkward to go to the grocery store only to find upon return to the parking that a crowd has gathered around your car as they snap photos from every angle and peer through the windows. And no press car to date has drawn my neighbours – who are used to seeing a new car in my driveway every week – out of their houses more than the RC did. They just had to take a closer look and learn more about it.

While I must admit, I did eventually get used to all the attention, but there’s something a little unnerving about being able to constantly feel eyes on you as you drive along.  It’s also a bit unnerving to drive a car that essentially screams “HI OFFICER!” so you tend to pay extra attention to your speed.

However, by the end of the week, I started to grow fond of the RC’s image. While I certainly would opt for a different colour, I got to the point where I could see myself actually owning something this flashy. If the RC’s styling has the ability to eventually win over someone like me, then I suppose kudos must be dealt out to its designers. 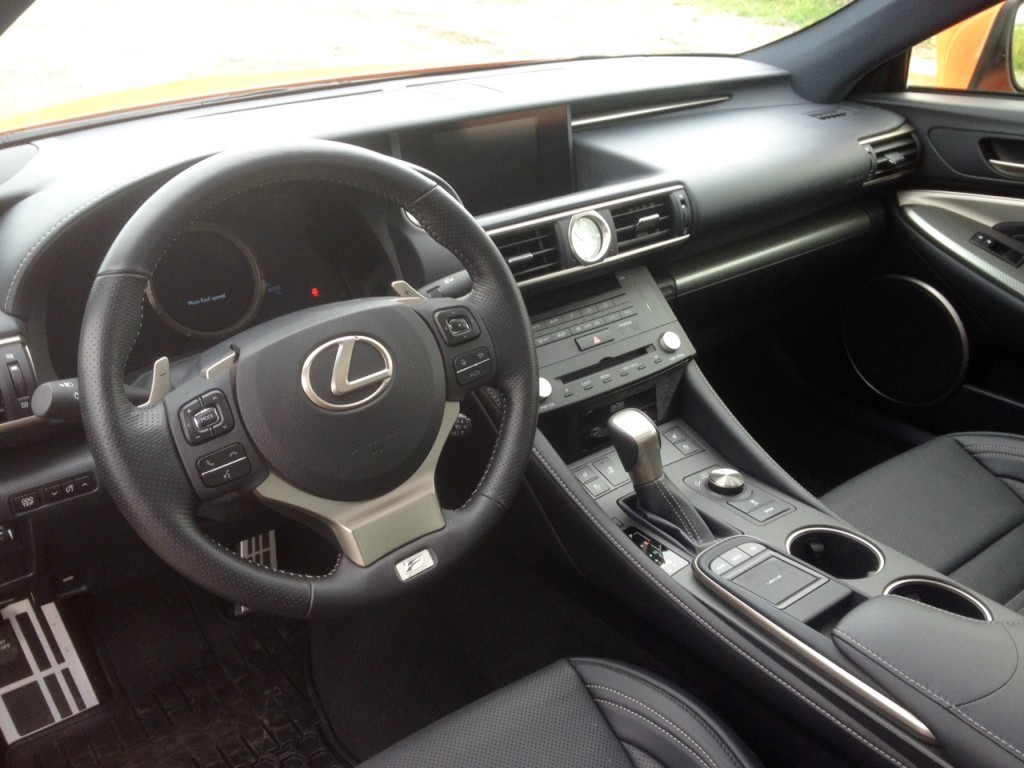 And I can say with a lot more certainty that the same could be said for the interior design.  It’s one of the nicer designs to come out of Lexus in recent memory. The three tiered approach isn’t as intimidating as you would think, and the screen is perfectly visible, despite being angled downward with a raised lip at the base. The look takes on a sportier than luxury tone, but that’s not to say that quality of materials aren’t befitting of a Lexus.

Lexus seems to be sticking with its track pad method for operating the infotainment screen while most other manufactures make use of a toggle or a touch screen. It has been noticeably improved over time; using touch capacity, but it still is not the most intuitive way to change a radio station, for instance.  Happily, there are still buttons that control some of the essentials and they are logically laid out. 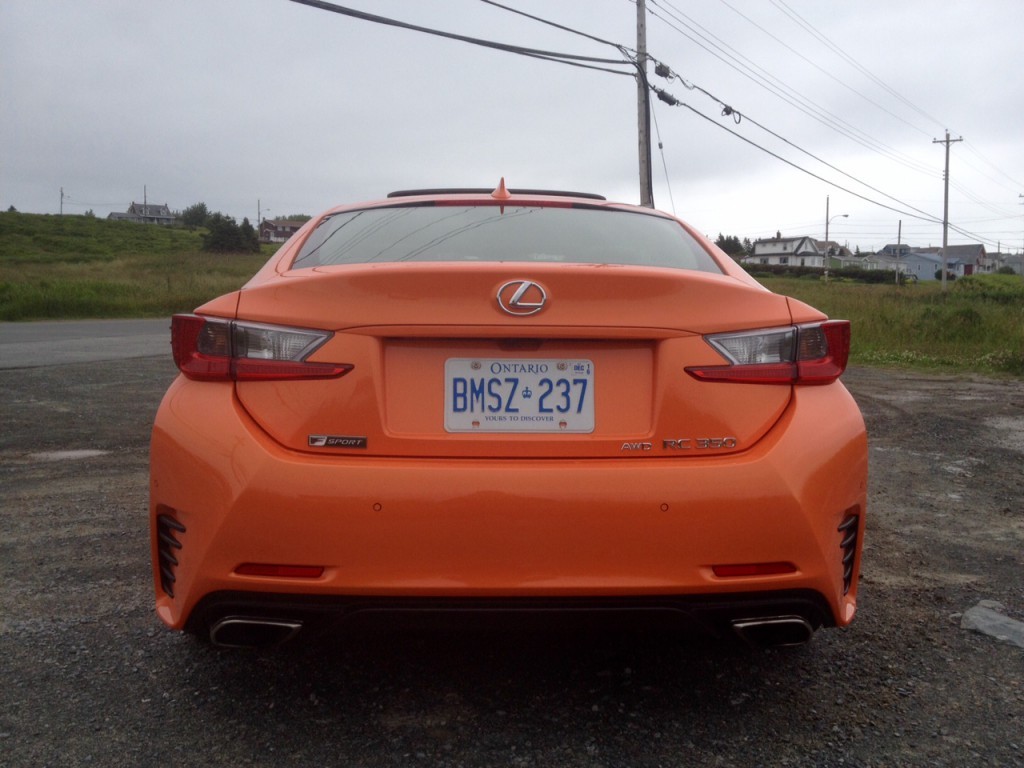 The RC’s exterior may seem vast, but the same cannot be said of the interior, specifically the rear seats. Those of smaller stature will be able to fit, but the porthole-like windows and dark interior may cause an issue if they are claustrophobic. The front seats offer plenty of room, and the trunk is a decent size, though the opening is shallow thanks to the sloping rear glass.

Overall, though, this is one of the nicer interiors I’ve been in in while. Plus it’s decently complimented by a “bangin’ stereo”, as James May would say. 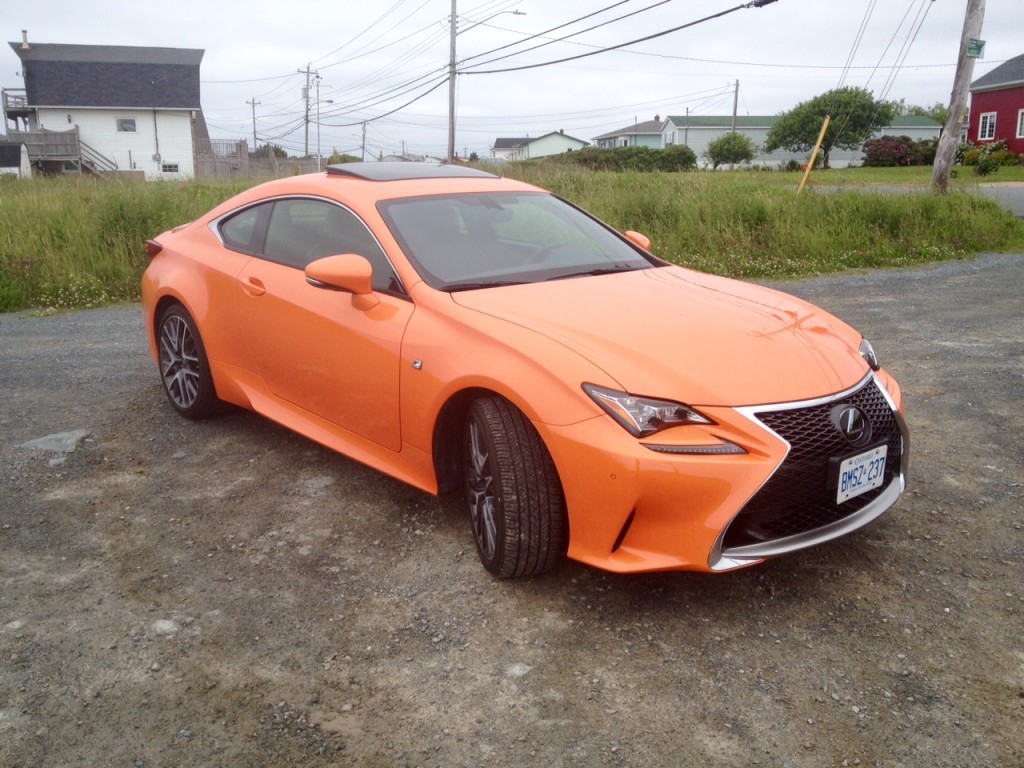 The RC in 350 guise nets itself a naturally aspirated 3.5 litre V6 which produces 307 horsepower and 277 pound feet of torque mated to a six-speed automatic. Obviously those numbers are nothing to sneeze at, but keep in mind, the RC 350 isn’t exactly light on its feet. This porker’s gross weight checks in a just under 5,000 pounds. That means you shouldn’t expect neck-snapping acceleration. That isn’t to say that the RC 350 feels slow, it’s just that its weight is more noticeable than you’d expect. 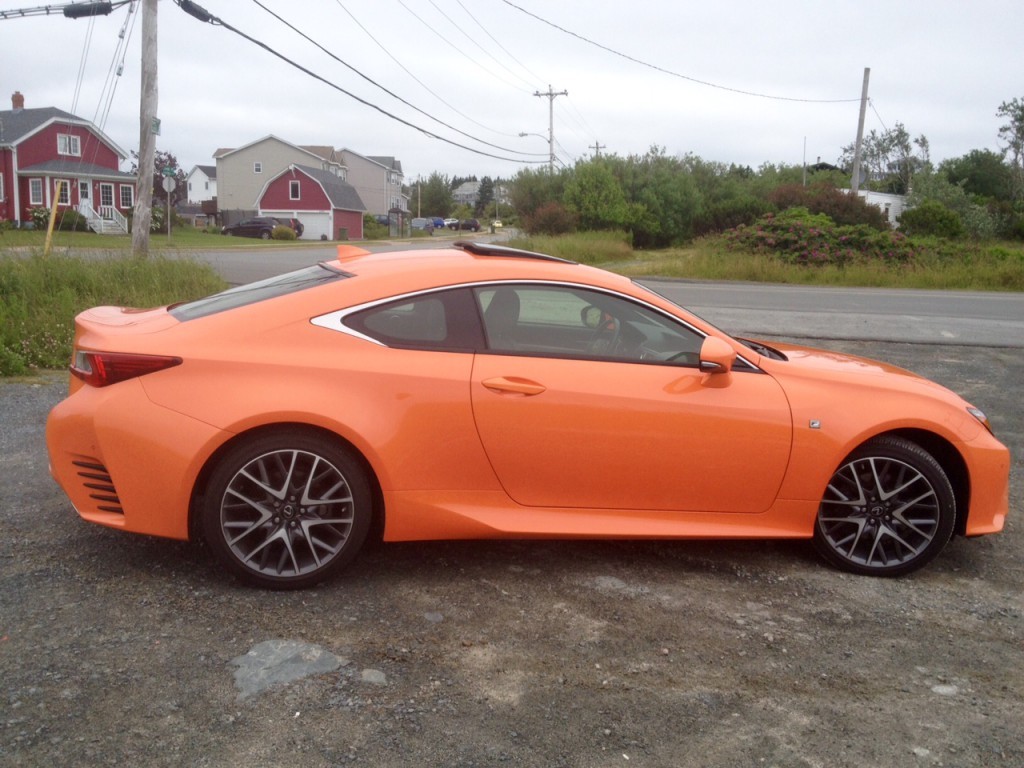 Ah, so this means that it’s also a pig in the corners you say? No, not necessarily. While the weight can still be felt, for the most part, the RC keeps itself in check. It certainly isn’t as capable as its exterior design would suggest, however, with a bit of restraint, a measure of fun can be had in the bends. The steering feedback is good and not artificially heavy.

As you might expect, there are different driving modes to choose from: eco, normal, sport and sport+. This may be surprising to some, but I actually spent a lot of my time in eco mode and there are two reasons why; one of which is obvious just by nature of its name, but also because the RC doesn’t default to feeling like it’s restraining itself in the name of fuel efficiency. If you aren’t driving spiritedly –in other words, if you’re just on your way to work – the RC provides a comfortable ride with added fuel efficiency in eco mode. If you find yourself with a sudden jolt of testosterone, the RC will comply, even in eco mode. Sport and Sport+ help to tighten the suspension and throttle response, which is obviously ideal when testosterone takes over, but it’s almost as if the RC is only too happy to let you indulge, no matter what mode it is in.

But make no mistake, the RC is fully a GT car. It’s something that will comfortably get you from A to B with a bit of added thrill in every now and then. In other words, it’s still a Lexus through and through. 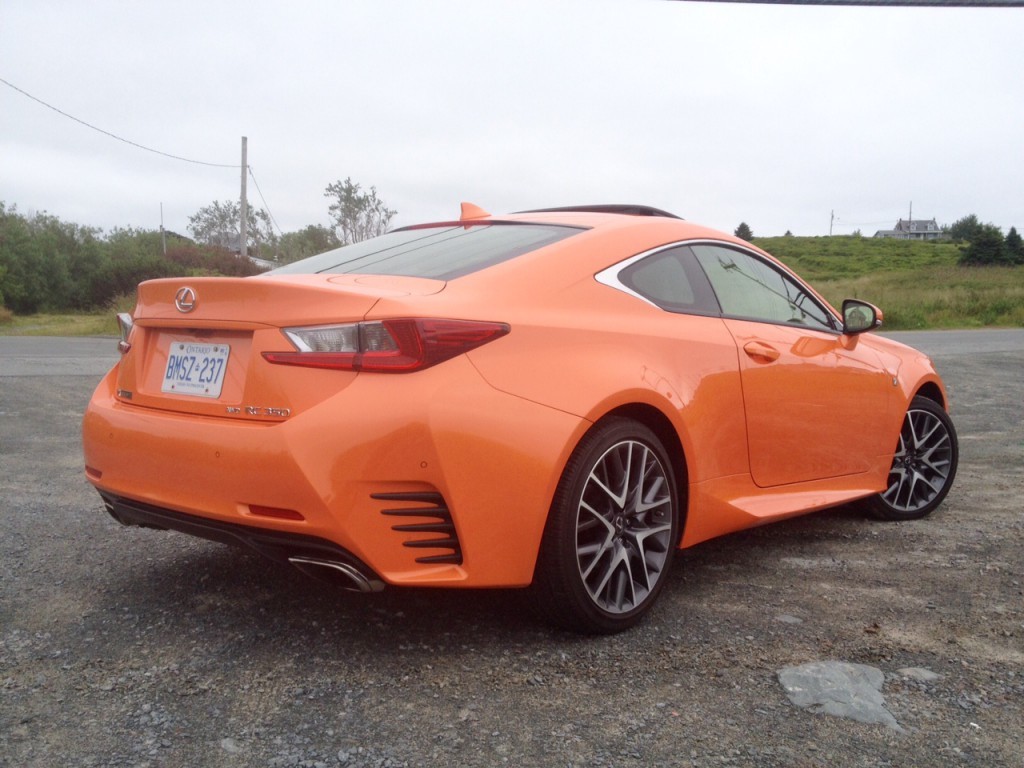 As you’d might expect, the RC’s forte doesn’t exactly lie within the fuel efficiency relm, though it is sold with a hybrid option in Europe. The regular old 3.5 litre V6 on the other hand churns out 12.6 L/100 kms in the city and 9.2 L/100 kms on the highway. For most of the time, as already mentioned, I kept it in eco mode and was average around 12.1 L/100 kms in mostly city driving. However, on the last weekend, I mostly kept it in sport + mode and that had a more dramatic effect as I ended up with 13.2 L/100 kms when I handed back the keys. So the moral of the story is, if you are concerned with fuel consumption then you should probably buy a Prius. If it’s more of a minor concern then keep it in eco mode. If you don’t care at all, have at it in sport mode. 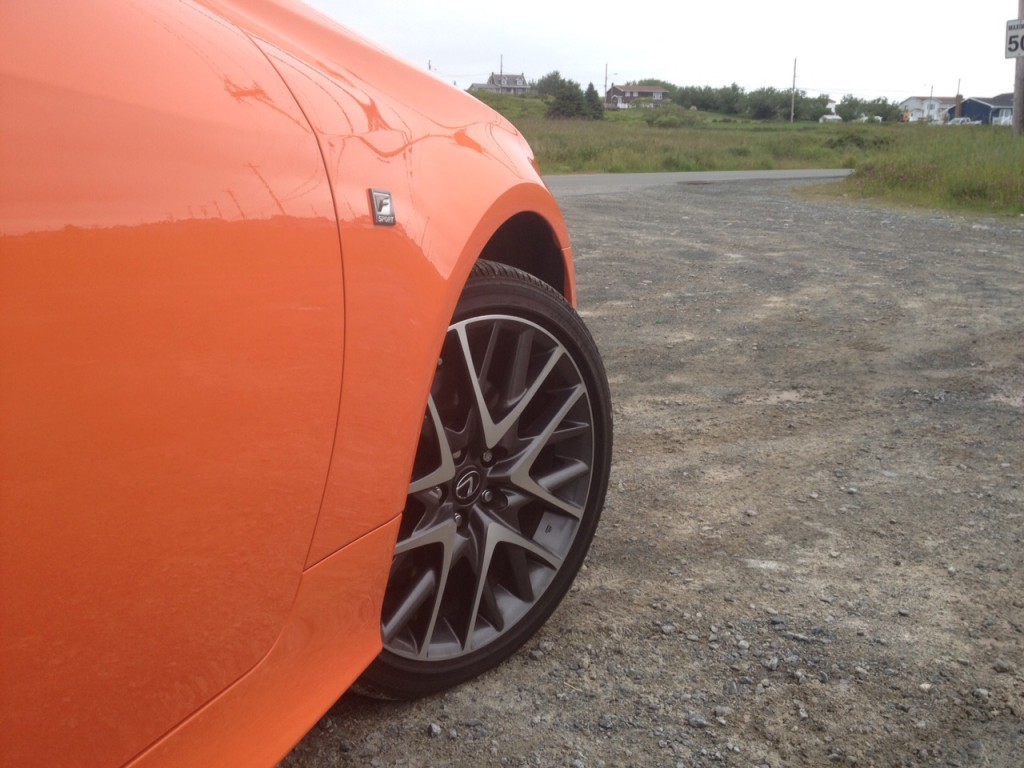 I’m always intrigued by cars that are able to change or challenge my initial perceptions. The RC is definitely one of those cars. Not only did I assume that it wouldn’t fit my personal tastes in style, but also in terms of performance being a bit heavy coupe. However, with each passing day I found myself enjoying it more and more and becoming irritated with its faults less and less. When I eventually did hand back the keys, I decided to reluctantly let Garry – the guy who’s job is, among other things, to shuffle the press cars around to journalists – know that I liked the car; so much so that I would consider buying one. I was preparing for him to laugh in my face, explaining that this porker comes nowhere near the competition in terms of performance and its styling is just ghastly. To my surprise, he responded with “you know what? I could see myself owning one too”. We agreed that a different colour would be a must, but otherwise, it won us over in the end. There aren’t too many cars around these days that can do that.

But then again, I was handed the keys to the Mercedes-Benz C300 coupe… and let’s just say it refuses to go down without a fight. Stay tuned for my impressions of that soon. 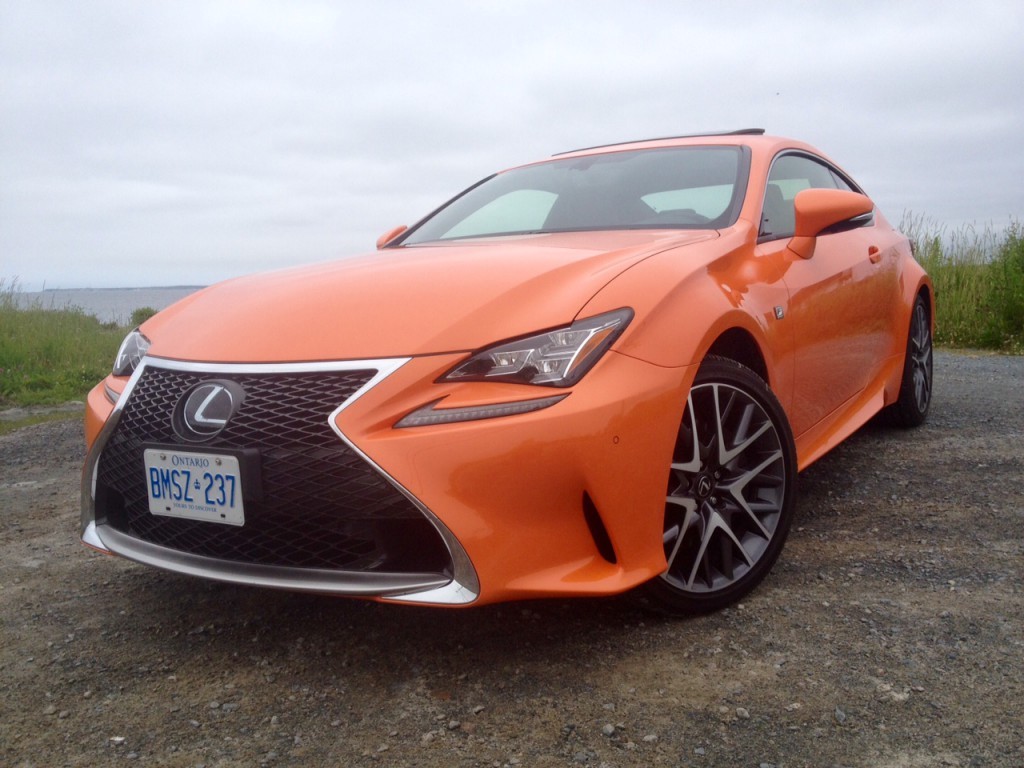