I don’t know if I’ll be able to write a normal recap of The Amazing Race for you guys because all I remember about watching the show is squealing “Eeeeee baby elephants! They’re so cute!” Much like Liz and Marie, I am a HUGE fan of elephants. Huge. The look on my face in this photo proves that: 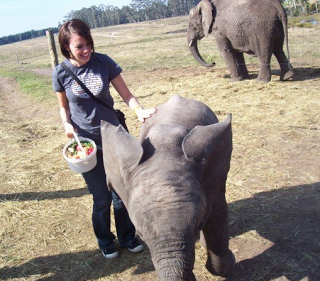 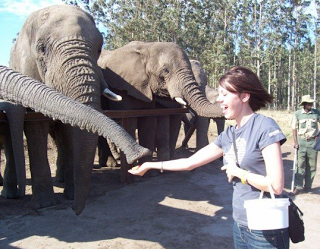 That is yours truly circa 2007 in South Africa and, frankly, I’m pretty it’s the most ecstatic I’ll ever be. That face? That’s the face of a girl whose dream is coming true. So I totally got it when Liz and Marie were THRILLED to get to wash a real, live elephant, even if that meant also cleaning up a little poo. We all make sacrifices – you have no idea how dirty those elephant trunks had made my hands by the time I finished feeding them my fruit. (Fun story: I was the only person on the tour who bothered to shell out what was likely the equivalent of $3 USD for the bucket of fruit, and I was so overwhelmed that I kept on feeding the same elephant over and over. The elephant caretakers kept reminding me to spread the love a little.)

OK, so shameless reminiscence to the happiest time in my life aside, let’s talk about The Amazing Race this week, hmm? It was a weird one – all along I’d thought I didn’t like the twins, but they were charming, bubbly and entirely enjoyable this week. All along I’ve liked both Laurence and Zac and Andy and Tommy, but both teams rubbed me the wrong way this week. 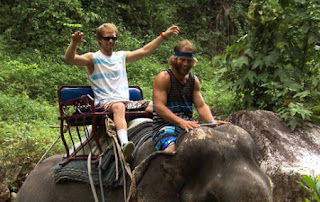 As excited as I was to see that the “local transportation” teams had to use to get the the Roadblock was an elephant, I was kind of bummed to find out they’d be staying in Thailand…again. I mean, we’re five episodes in and so far they’ve been to Taiwan, Indonesia and Thailand. All lovely places, but I’m bored. I was very pleased to see the teams will be traveling to Malawi next week – it’s time to shake these locales up.

The Snowboarders had a significant lead over the rest of the teams, and Justin and Jennifer began in a not too shabby position as well – both teams were reaping the benefits of successfully completing that coral challenge, it seemed. The Roadblock required one team member to search a pool of water for their next clue. It looked pretty darn easy – I mean, even Cathi completed it and only fell once. That must be a new record for her. 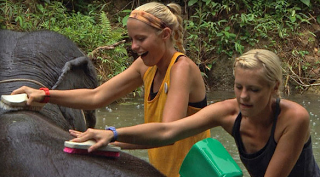 The twins were starting a good hour or so behind the second-last team, Bill and Cathi, and they had to complete their Speed Bump before beginning the first Road Block. Unfortunately, the tasks this leg were so simple that it didn’t seem as though Liz and Marie ever had a chance to make up time.

Instead of a Detour, teams were required to complete a second Roadblock. This was either easy, or slightly inconvenient. First they were asked to dissemble a small Buddhist temple – but smart teams figured they’d later be required to reassemble it and took mental or written notes on what it looked like. Those teams had no problem finishing the task and moving on. The teams who didn’t think that far ahead had to go back and look at other temples, but that didn’t seem to set them too far behind either.

It was here that I started to lose some love for Team Snowboarder and Team Father/Son. First, Andy and Tommy got all weirdly Christian about working with the Buddhist temple. They talked about being Christians, not feeling anything by being around the temples and that “We know the one true God and it’s pretty straight forward when you read the Bible.” Frankly, it felt disrespectful, condescending and unnecessary. Especially when compared to Jennifer’s comments, as she spoke about treating the temple with the respect she would want should someone be dealing with elements from her religion of Christianity. Just another example of what a topsy-turvy episode this was – I never would have expected to like Justin and Jennifer, but they kicked butt this leg. Jennifer had the brilliant idea to use a cab driver’s cell phone to snap a picture of the temple, and was therefore able to quickly reassemble it.

Laurence didn’t come off quite as well during this challenge. Since he’d performed the first Roadblock, Zac was required to complete this one. Laurence insisted that they didn’t need to take notes on the temple, and was less than apologetic when Zac realized his instinct to do so was correct. At least Ernie, who made the same mistake, had the decency to act as though he should throw himself off a building for making such a dumb mistake.

And then things got confusing. All the teams were told to take a bus to Bangkok. Sounds easy, right? Well, there were different kinds of buses. Andy/Tommy, Justin/Jennifer and Jeremy/Sandy all got on a 4:30 p.m. bus – but it was a 13 hour ride to Bangkok. Meanwhile, Laurence and Zac also got on a 4:30 p.m. bus, but after a few minutes decided to jump off and go back to the station because they worried being on a first class bus would be deemed against the TAR rules.

Next, Bill/Cathi and Amani/Marcus grabbed a 5:30 p.m. bus, as did Ernie/Cindy – but the high-string fiancees were on an express bus, not the regular bus. Either they’d be welcomed at the pit stop with a penalty, or Laurence and Zac had made a huge mistake.

Laurence and Zac ended up getting on an 8:00 p.m. bus, and I don’t even know what time it was when the twins made it on one. The poor girls were far behind, out of money and almost missed the bus they’d used all their money to purchase tickets for. Yet through all the drama, they managed to maintain pretty cheerful attitudes. (Much better than those of Ernie and Cindy, who also had some trouble financing their cab ride.)

Thanks to the express bus they boarded, Ernie and Cindy arrived in Bangkok first, followed by Marcus/Amani and Bill/Cathi – apparently that 5:30 bus must have made less stops than the 4:30 bus, because Andy/Tommy, Justin/Jennifer and Jeremy/Sandy didn’t arrive until a little later.

Once in Bangkok, things continued to be easy as pie as teams were sent to feed some fish, and then directed to the pit stop. The only catch was that it required some long cab rides, which required money, which Liz and Marie did not have. As the other teams began to check in, they were begging local cab drivers for free rides. Good thing they’re hot and blond!

The actual results seemed to come down to cab drivers. Amani and Marcus and Bill and Cathi had speedy ones, so they arrived in first and second. Big finishes for two teams who’ve come close to elimination in the past. Next, Ernie and Cindy arrived and were checked in at third place, with no penalty for taking an express bus. Uh-oh, Laurence and Zac… Justin and Jennifer arrived in fourth place, Andy and Tommy were in fifth despite experiencing a minor setback when a lady they asked for directions walked off with their clue. Lesson to future racers: NEVER let anyone take your clue! Laurence and Zac managed to pull out sixth place. They were told they wouldn’t have faced a penalty as the first-class rule only applies to air travel and Laurence reacted with the same smug attitude that bothered me throughout the leg. I guess it’s time I select some different teams to root for. (Keep up the good work, Bill and Cathi!)

Thanks to some serious cab trouble, Jeremy and Sandy lagged behind the teams they’d arrived in Bangkok with but I knew there was no way their troubles had delayed them enough to give the twins a chance. The girls managed to finish thanks to good genes and generous cab drivers (you have to give them credit for refusing to beg for money in such a disadvantaged area), but they knew they’d been eliminated. It was a tearful end to the race for them, and I was surprised that I actually felt bad for them. They bickered a lot in the early stages of the race, but were definitely one of the most likable teams during this episode.

What did you guys think of this episode? Did you change your mind on a few teams? Are you glad they’re moving on to a new continent? Sound off in the comments below!