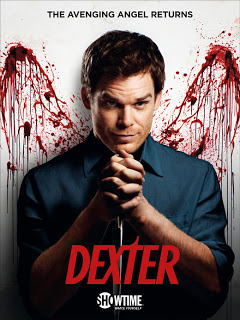 Between Dexter and Boardwalk Empire last night, I was feeling so squeamish that I’m glad I hadn’t prepared anything to snack on during my shows. Sh–‘s getting real – not that you’d want to say that on live TV, unless your name is Lieutenant Deborah Morgan.

Dexter arrived at the scene of the four horsemen, and thanks to the newbie from Chicago it was figured out that the killings were reenacting scenes from Revelations. Thanks to the sloppy killing handiwork but intricate scenes set up (or “tableaus”, one might say) Dexter inferenced that there might be two people working together on these murders. Thanks to the religious context of the murder scenes, Deb nicknamed them the “Doomsday Killers”. 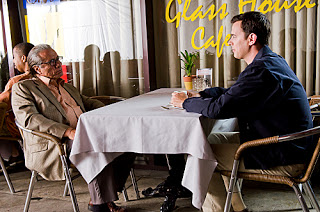 We learned a lot about the Doomsday Killers this week, but there’s still lots to figure out. The Professor’s name is James Gellar. He was an expert in Revelations, stole an ancient sword from the university where he worked and has been on the run for a few years. We also know that Travis’s parents died in a car crash when he was 14, and after that he was raised by his sister. We still don’t know how these two met, or why Gellar has such a strong hold over Travis. But we do know that he’s a bit of a prude. After Travis decided to go out with a cute waitress (after Gellar freaked out that Travis spent an evening with his sister, did he really think a date would be cool?) and, er, sealed the deal, the Professor bound her up and very elaborately ended her life. Because she’d been defiled. As if I didn’t already hate this guy. 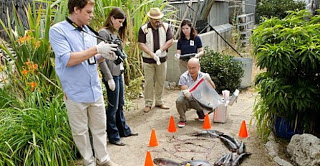 The murder scene was insane. The poor girl was strung up inside some kind of greenhouse, still alive, dressed like an angel – wings and all. She was bound and gagged and hooked up to something, so when a cop entered the greenhouse a trip wire set off a chain of motions that ultimately killed her, right there in front of them. Spooky. And the locusts were a disgusting touch. Dexter spotted Travis at the crime scene, though, and could tell he was involved just from the look on his face. It’s chase time.

Also, we now know that the Doomsday Killers have been hiding little numbers on their victims – 1242 and 1260, I believe. The Dexter recap over on nymag.com has some interesting insights about how these things tie into the bible. This episode did a good job of increasing my interest in the Gellar/Travis storyline.

Father, Son and the Holy Ex-Con

Meanwhile, the religious themes continued this week as Dexter headed to the hospital with Harrison. The poor kid’s appendix had ruptured and he needed surgery, which left Dexter begging god for a good outcome next to some product placement. Brother Sam showed up to support, and since Dexter also attended the combo baptism-BBQ earlier that week, I’d say that makes them officially friends. Even Deb knows they’re friends now.

While in the waiting room, Sam opened up to Dexter about his traumatic childhood and his rehabilitation in prison. I think Dexter is starting to realize he and Sam might have more in common than he thought. Harrison came out of the surgery in fine shape, but Dexter wasn’t ready to make good on that “I’ll do anything” promise he made next to the coffee machine. After all, it was science that saved Harrison.

And as always, there was plenty of drama in the Miami Metro homicide department this week. Deb thought she bombed her first press conference (LaGuerta was right there to support her with some disingenuous advice and an ugly necklace) but the media and the public actually found her blunt delivery of the facts endearing. She’s going to catch that f—er.

I’m not too worried about Deb (especially since she actually bought some decent clothes once the new guy told her she looked as though she were attending a hoedown) but I am worried about Angel. Really, Angel? Smoking weed on the job? When you’re a COP? I expect that crap from Quinn, but not you. Masuka also almost found himself in hot water when he realized the hot intern had stolen the Ice Truck Killer’s evidence and was auctioning it off. I was a little disappointed there – I was hoping Ryan had some kind of crazy serial killer fetish to be explored. Just being a sticky-fingered roller derby fan who’s short on rent isn’t very exciting.

At some point, I think the Brother Sam and Doomsday storylines will need to intersect a little. I’m a huge Dexter fan and love the slow build, and I think this season is gaining momentum in the right way so far. Let’s hope it keeps moving. What did you guys think of “A Horse of a Different Color”?