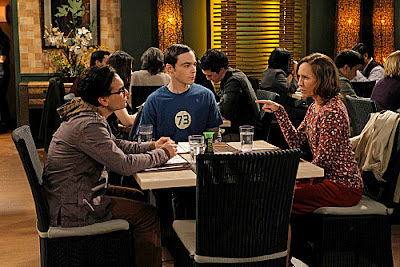 Thank god for The Big Bang Theory, because with all my NBC sitcoms in repeats last night I needed at least one good dose of comedy. And “The Rhinitis Revelation” didn’t fail to deliver.

The episode saw Sheldon’s mom Mary come stay with him before taking off on a born-again Christian cruise. Sheldon had big plans for her – cooking fried chicken and attending nerdy lectures – but Mary was more inclined to go out for sushi and go sightseeing. Luckily for her, Sheldon has friends that were happy to make sure she had a good trip.

Mary Cooper was a big part of why this episode was hilarious. The writers managed to strike the right balance of sweet, well-intentioned Texas charm and inappropriate political incorrectness. It was great to see Mary interact with Sheldon’s friends, but I really wish there had been a scene between her and Amy. She was so curious about the nature of their relationship, you’d think she would have insisted upon a meeting.

When Sheldon realized his mother was no longer willing to devote the same amount of attention to him as she did when he was a little boy, he had something of a meltdown. Amy explained to him that while he may be extraordinarily smart, when it comes to emotions and relationships he’s just like everyone else – worse, in fact, since dumb people avoid over-analyzing and thus deal with their emotions even better than gifted people like themselves. Sheldon’s tiny epiphany – that he’s not better than everyone else in every single way, only the ways that count – didn’t really end up providing any personal growth or character development. By the time he returned home he’d come down with a cold, and his mom put him to bed and sang “Soft Kitty”. If he learned anything from the experience, we didn’t see it.

Meanwhile, it looks like Howard will be going into space (yay!), Raj is developing something of an alcohol addiction (awkward), and Leonard is realizing he doesn’t have much of a relationship with Priya after all (finally).

What did you guys think of the episode? Did you enjoy Mrs. Cooper’s visit as much as I did? And don’t forget to check out the list of my favorite moments and quotes: